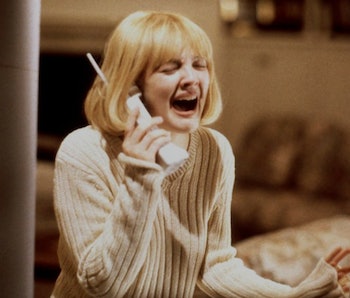 Movies come and go from Netflix all the time. Normally, it’s no big deal, but with the streaming wars heating up (Disney and Apple enter the fray in November, NBC and HBO Max are coming next year), there’s no guarantee that any departing film will ever turn up on Netflix again.

So you can imagine my dismay when I learned that Wes Craven’s 1996 meta-horror classic Scream would be leaving the streaming service on November 1. That’s the bad news. The good news is, now you have a reason to watch (or rewatch) the movie as part of your Halloween celebration.

If you’ve somehow never seen Scream before then what are you waiting for? Stop reading this article and start watching it on Netflix. Seriously, you won’t regret it. This is a horror master at the top of his game, taking everything he learned from Nightmare on Elm Street and turning that series on its head to reveal that the only thing scarier than a demon with blades on his fingers is a bunch of teenagers who’ve seen one too many scary movies.

Warning: I’m about to start talking spoilers. So if you haven’t seen Scream then, seriously, stop reading and watch it now.

If you’ve already seen Scream, well, you should probably rewatch it anyway. (Why are scary movies so inherently rewatchable? That’s a discussion for another day). This is seriously the movie that keeps on giving — I’m a little ashamed to admit I had forgotten that Henry Winkler plays the high school principal until I completed my yearly Scream rewatch earlier this week.

But beyond the joy of watching Fonzie get murdered by a teenager in a scary white mask, there’s not a moment in Scream that isn’t extremely enjoyable. Whether its the bone-chilling first scene in which a young Drew Barrymore is terrorized on the phone and then sliced open by the murderer, a young Jaime Kennedy lecturing his friends on the rules of horror movies (“Sex equals death, okay?”), or Neve Campbell punching Courtney Cox in the face, it’s all grade-A material.

Scream wasn’t Craven’s first attempt at meta-horror. Two years earlier, he resurrected Freddy Kruger with New Nightmare, which took place in a version of the real world where Freddy terrorized the set of a new Elm Street movie and Craven plays himself. (It’s awesome. Watch it.) But in Scream, the director takes this concept even further, creating a world where every character seems to realize they’re in a scary movie with no idea of how to escape.

The Scream franchise would continue to ramp up the levels of meta in subsequent sequels (Scream 2 opens at the premiere for a movie called Stab based on the events of the first film), but the franchise quickly loses touch with what made the original so great. Scream isn’t just a hilarious send-up of the genre, it’s also downright terrifying, making it the perfect movie for any horror fan looking to celebrate Halloween in style — while you still can.

You can watch Scream on Netflix until November 1.

More like this
Culture
19 hours ago
You need to watch the scariest exorcism movie on Netflix before it leaves next week
By Eric Francisco
Entertainment
8.6.2022 3:00 PM
'Nope' editor Nick Monsour reveals the secrets behind Jordan Peele’s sci-fi monster
By Jeff Spry
Culture
8.5.2022 10:30 AM
How Netflix's epic Sandman finale sets up Season 2
By Mónica Marie Zorrilla
Related Tags
Share: