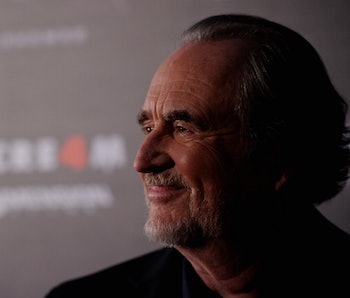 Horror legend Wes Craven died Sunday at 76, after a bout with brain cancer. Craven is known for taking risks in his writing and filmmaking — he was never afraid to deconstruct his own genre (Scream), yet he also never took himself too seriously (Nightmare On Elm Street), recognizing that sometimes teenagers just want to watch Johnny Depp get eaten by a bed.

Craven burst onto the scene with 1972’s The Last House On The Left, which Roger Ebert called “a tough, bitter little sleeper of a movie that’s about four times as good as you’d expect.” Craven followed this with The Hills Have Eyes in 1977. Both were captivating, jarring, and smartly written additions to the flourishing ‘70s horror scene. In the manner of all great horror movies, they tapped into wider societal anxieties — shifting gender politics, xenophobia — and disguised them just enough for audiences to examine them at a distance while remaining entertained.

Thirty years later, both were made into rather underwhelming remakes — but mediocre or not, their very existence demonstrates Craven’s cultural stronghold. His work from the ‘70s did not disappear into dated obscurity, like other relics from 1972 — Frogs, for instance, which you have probably never heard of. There is a reason Craven’s films get remade and yet nobody has tried to remake Frogs.

Alternately frightening and campy — and with a 94 percent Rotten Tomatoes rating! — it announced Craven as a powerhouse and spawned a franchise that has so far grossed almost half a billion dollars in its nine movies. It was only a matter of time before Craven made the film that shook the genre forever and launched him to auteur status:

The scary-movie prologue in which the blonde girl dies is rote by now, but Scream offered one of the most chilling and iconic incarnations. From its opening scene, it announced itself as a new kind of horror film — one that pulled no punches and demonstrated a meta-commentary on its own status as a horror movie while keeping you unnerved throughout. The best of smart, modern horror can be traced back to Scream, with its combination of self-awareness and honest scares.

Scream also wasn’t afraid to slyly address detractors’ anxieties that horror movies corrupt the youth. And although the genre is often known for killing the blonde girl and alternately fetishizing teenage sexuality and slut-shaming, Craven’s transgressive attitude is evident in his unusually strong heroines, from Sydney Prescott to the heroine of the bafflingly underrated Red Eye.

Horror movies are not generally considered “high culture” in mainstream society, and many of Craven’s peers have been dismissed along with the genre. Craven’s smart, transgressive work made him impossible to ignore.

More like this
Entertainment
Sep. 13, 2022
With Pearl, A24 perfects its first horror franchise
By Andy Crump
Culture
Sep. 18, 2022
You need to watch the sexiest sci-fi thriller of all time on Amazon Prime ASAP
By Andy Crump
Entertainment
Sep. 25, 2022
Knock at the Cabin trailer gets roasted online for one bizarre mistake
By Alex Welch
Related Tags
Share: