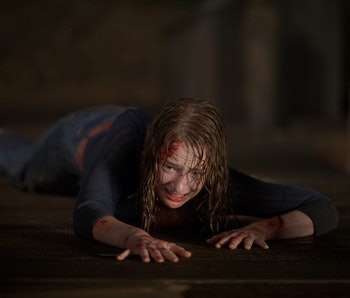 The internet has spoken. The top ten horror movies of the past 15 years, according to a reader poll over at Movies, Films, and Flix. Usually the opinions of internet readers — present company excluded, of course! — are to be discounted at every turn. But props to Movies, Films, and Flix for rounding up a legit lot of voters, apparently.

He’s what they chose:

This is a right and just list. Not least because the ostensible champion is one of decade’s funniest, weirdest movies of any stripe.

Like all lists that claim to name “the best” of anything, this can be taken with a grain of salt and surely provokes some righteous indignation. For example, it’s a travesty that it excluded two items from this, like Fright Night and What We Do in the Shadows. But, on the whole, it’s unusually solid for a mass poll, emphasizing more cerebral horror over blood and gore. From entries that possess as much humor and meta commentary as they do horror, like Cabin in the Woods and Shaun of the Dead; to glossy mindfucks like Sam Raimi’s underrated Drag Me To Hell…

…to moody classics like Let The Right One In; and Grimm fairy-tale-like dark whimsy mixed with social commentary, like Pan’s Labyrinth:

This list covers the spectrum of what horror movies can be and shows their range and complexity in the hands of filmmakers who respect the genre. Although Cabin In The Woods was recycled from [Buffy](http://buffy.wikia.com/wiki/TheInitiative(organization), director Joss Whedon gave it the same care he gives all his projects, and it rightfully claims top spot.

However, all that being said, it’s total bullshit that nobody recognized the cinematic brilliance of Frankenfish.