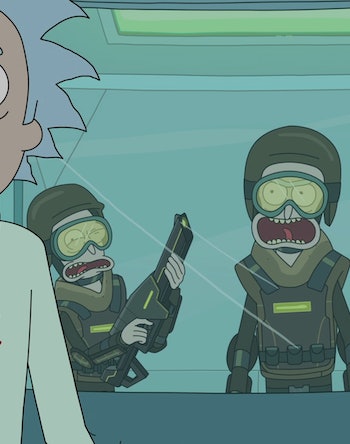 Rick and Morty began as a Back to the Future troll and it’s been full of obscure meta-commentary ever since, poking fun at fans and our high expectations of what’s really just a crude cartoon. But the greatest troll Rick and Morty ever executed happened late in Season 3 when we got one of the series’ all-time best episodes: “The Ricklantis Mixup” — or should we just call it “Tales From the Citadel”?

When “Rest and Ricklaxation” finished airing on August 27, 2017, the preview for the following episode promised that Morty and Rick would go to “the lost city of Atlantis” for a “fun, fresh, self-contained adventure” in “The Ricklantis Mixup.” What actually happened when the episode aired was everything but that. The events depicted reintroduced Evil Morty into the mix as the series’ greatest villain, setting up what’ll probably be a huge conflict for Season 4.

The episode features a series of interwoven vignettes resembling the excellent Avatar: The Last Airbender episode “The Tales of Ba Sing Se,”. Each story takes place on the Citadel, exploring the interdimensional hub where Ricks and Mortys from across the multiverse live and work together. (Reminder: Rick C-137, the Rickest Rick at the focus of the show, hates all these people.)

There are the orphaned Mortys in a foster school, a veteran Morty cop with a rookie Rick sidekick, and in the midst of it all, political upheaval as Candidate Morty campaigns for and wins a democratic election to become the first Morty President of the Citadel.

Rick and Morty first introduced the Citadel in Season 1’s “Close Rick-Counters of the Rick Kind,”, but we didn’t return to the location until the Season 3 premiere, “The Rickshank Rickdemption.” Rick destroyed the Galactic Federation and the Citadel in one catastrophic prison break, teleporting the latter into the former and killing untold thousands of Mortys, Ricks, and Gromflomites in the process.

“Tales From the Citadel” examines what day-to-day life is like for people on the Citadel in the wake of this disaster and its consequential financial crisis. Mortys are displaced by dying Ricks and satisfaction for Ricks is at an all-time low. The episode comments on the politics of class disparity, ruthless consumerism, and the subversive ways that leaders can selfishly manipulate the masses within a democratic society to their own ends. It also features a strip club full of dancing Mortys.

The episode’s many stories weave together in a depressing tapestry made that much more uncanny by the obvious fact that everyone looks the same, like that one scene from Being John Malkovich extrapolated into an entire story. But “Tales From the Citadel” feels like a compelling piece of dystopian sci-fi, even when you ignore that every single character is either a Rick or a Morty.

“Mortys are raised to be sidekicks.

Without a side to kick, they just start kickin’.”

“The one thing that maintains across the entire group [on the Citadel] is that Ricks are in charge and Mortys are beneath them,” writer and producer Mike McMahan says in an “Inside the Episode” video from Adult Swim, “The longer that we thought about it, we realized that’s where a lot of interesting drama happens.”

Candidate Morty recognizes this inherent power dynamic and uses it to manipulate the masses into following him. Here’s the stirring speech he gives during a debate when asked how he would solve the divide between Mortys and Ricks:

The schools, the streets, and the factories represent the three central stories we see in the episode: an innocent group of orphaned Morties dreaming of a better existence, a pair of jaded beat cops fighting civil unrest on the streets, and a factory worker Rick who grows frustrated enough to kill his Rick boss. Each of these plot threads gets perhaps less than five minutes of screentime, but it’s in service of something greater.

Dan Harmon said that the “heat in the air” and the “current climate” politically, ideologically, and emotionally presents the biggest character in the story. Each Morty and Rick plays their “Robert Altman part” that, true to Altman’s style, focus on character and atmosphere over plot. The plots are all rather simple, even derivative, but executed in a gimmick like this, they’re refreshing, funny, and snappy.

Each of the plots in this episode has plenty to offer, but the best jokes come in the “factories” segment.

Early in the episode, Sam Elliott narrates a commercial for Simple Rick’s “Simple Wafers” Wafer Cookie, a snack infused with a secretion from Simple Rick’s brain in the moment he achieves a feeling of satisfaction and love. Our protagonist in this story is a disgruntled factory worker who’s spent 15 years stamping these cookies with their insignia, but when he’s passed over for a promotion in favor of Cool Rick, he kills his boss and then Simple Rick.

We’re meant to sympathize with a man frustrated by the unfair status quo even when he commits murder. The twist at the end of his story is uniquely Rick and Morty in its brutal, nihilistic tone. A Willy Wonka-looking Rick who owns the factor sets the Rick free but then tranquilizes him in that moment of bliss, making this Rick J-22 the new Simple Rick and harvesting his satisfaction into an addictive consumer product.

“He made us all take a look at what we were doing, and at the bargain he got a taste of real freedom,” Sam Elliott says in a new commercial. “We captured that taste, and we keep giving it to him so he can give it right back to you, in every bite of new Simple Rick Freedom Wafer Selects. Come home to the unique flavor of shattering the grand illusion. Come home to Simple Rick.”

Each of these three stories is totally defeatist in the end, showing us that the Citadel is a place where dreams go to die. The political upheaval, even when it benefits Mortys everywhere, is just a means to a much more sinister end.

Candidate Morty wins an unlikely victory in the democratic election, but the big twist confirms this is the same villainous mastermind from Season 1’s “Close Rick-Counters of the Rick Kind” that fans call Evil Morty. Once he murders all opposition and becomes something closer to a dictator rather than a president, he ascends into the most powerful person in the multiverse in control of an entire city full of genius scientists and nervous, subservient children.

“This is a Morty who’s not just one step ahead of our Rick, but one step ahead of all Ricks,” writer Ryan Ridley says in the behind-the-scenes video. “Everything he’s saying is the right thing. It’s just that he only said it in order to manipulate an entire space station of genius scientists to give him the ultimate power in the multiverse.”

We should all be afraid of what Evil Morty is capable of even if Morty and Rick seem blissfully unawares over in the Replacement Dimension at the very end of the episode.

Evil Morty didn’t appear in the last few episodes of Season 3, but now that Season 4 is finally here, we’re bound to see him very soon. We don’t know for sure if Evil Morty will appear; He did skip Season 2 after all.

“I’m kind of glad we set that up,” show co-creator Justin Roiland says of the character in the BTS video about the episode. “We got rid of the Galactic Fed. Now we have this cool new antagonist. He’s perched in a high position now. There’s a lot he can do.”

There sure is a lot that he can do, but what will it be?

Watch “The Ricklantis Mixup” on Hulu.