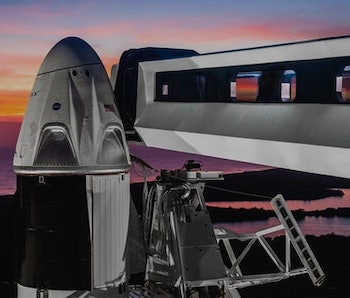 It’s crunch time for SpaceX’s Crew Dragon, with NASA reportedly reaching “full panic” mode as the agency awaits SpaceX’s crewed capsule. After tense public comments between Musk and NASA administrator Jim Bridenstine, the pair were seen reconciling at the SpaceX headquarters last week. During the meeting, the pair declared that they aim to launch the first manned test mission by the first quarter of 2020. The mission will be a big step for enabling NASA astronauts to travel to the International Space Station closer to home, instead of renting seats from Roscosmos and taking off from Kazakhstan’s Baikonur Cosmodrome. Read more.

During the visit, NASA also released a new image of the spacesuit that crew members will wear during their “Demo-2” mission. Robert Behnken and Douglas Hurley are expected to be the two astronauts flying on the Crew Dragon for the first time. Read more.

How much energy will the Starship’s propellant depot need to come home? Between one and 10 megawatts, Musk suggested this week. In a response to a question about SpaceX’s energy usage, Musk declared that using a depot to harvest resources from Mars, and use those to create more fuel for the Starship, would require a fair amount of energy: “Depends on total system efficiency & how long the propellant plant can run to refill Starship, so 1 to 10MW as a rough guess.”

Robert Zubrin, an aerospace engineer, responded to these figures by suggesting that one megawatt would probably produce 780 tons of propellant in 390 days. A one-megawatt solar array would likely measure around 40,000 square meters, or four football fields, based on Zubrin’s estimations.

As the Starship’s planned mission to Mars approaches, a big issue could be whether humans will bring microbes to the red planet. Samantha Rolfe, a lecturer in astrobiology at the University of Hertfordshire, warned last week that “microbe-ridden humans walking on the red planet could contaminate it with bugs from Earth.” Read more.

What’s next for SpaceX: SpaceX is set to launch another set of 60 Starlink satellites for its internet connectivity constellation at an as-yet-unspecified date. The launch was originally set for October 17 but has since been pushed back. It’s expected to take off from Space Launch Complex 40 at the Cape Canaveral Air Force Station in Florida.

It is perhaps an unfortunate link, although, upon further research, it seems the Italian spelling is “bocca cieca.” Although SpaceX’s facility currently uses the same name as the nearby village, perhaps in the future the firm will choose a more space-age name for the facility itself.

They will indeed be in orbit. The initial constellation, as outlined in May, is expected to cover 4,409 crafts, 1,584 of which will orbit 550 kilometers above the Earth’s surface and the rest at 1,150 kilometers. The first 60 that launched in May raised their orbiting fields from 440 kilometers to 550 kilometers. Starlink 44 nearly collided with an ESA satellite last month after moving to 320 kilometers as part of a deorbit test.

Although that sounds like we might not have room for everything, rest assured that last year the ESA completed 28 maneuvers anyway. And while there’s only around 5,000 satellites in total orbiting the Earth, there’s around 900,000 objects larger than one centimeter that the ESA and others need to avoid.

This has been Musk Reads: SpaceX Edition #112, the weekly rundown of essential reading about futurist and entrepreneur Elon Musk. I’m Mike Brown, an innovation journalist for Inverse.