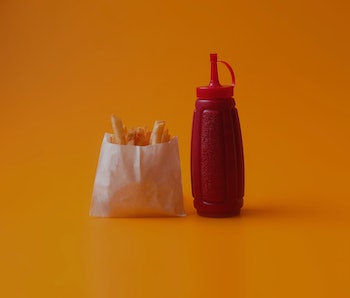 The fast food industry specializes in creating increasingly large portions of perfectly fried, salty concoctions that are already responsible for a number of health conditions. Now, a growing body of research suggests that the effects of fast food diet may play out in the brain as well as the body.

The accumulation of a common nutrient found cheap, delicious fast food may have links to depressive symptoms in teens, a study published this month in the journal Physiological Reports suggests.

"Diet is important for emotional well-being

These high-sodium, low-potassium urine samples suggest that these teens were eating foods that had similar nutrition profiles. Namely, diets high in processed foods, fast food, frozen meals or salty snacks and low in fresh fruits and vegetables, explains the study’s lead author Slyvie Mrug, Ph.D., the chair of the University of Alabama at Birmingham’s department of psychology.

Mrug tells Inverse that her findings highlight an important connection between emotional health and diet that might not be visible right away:

“We hear a lot about the impact of diet on obesity and other health outcomes, but this work also shows that diet is important for emotional well-being, which then affects all areas of people’s lives,” she says.

This is a small-scale study that gets right to heart of a field sometimes called nutirional psychiatry. That’s the idea that what we eat can have significant effects not only how we feel but on diagnosable mental health conditions too.

Earlier studies in this field have specifically focused on how diets rich in nutrients, like the Mediterranean diet might help prevent depression. But nutrients aren’t enough on their own. A paper published in March in JAMA showed evidence that you can’t treat depression with dietary supplements.

Mrug explains that a number of large scale studies have suggested unhealthy diets do play a role in depression, but that some of these studies have been hard to interpret, because people self-report their symptoms and their diets all at the same time.

“So those studies cannot rule out other explanations, such as depressed people choosing less healthy foods, some other factors (e.g. stress) affecting both food choices and depression, or bias due to both diet and depression being measured the same way (self-report),” she explains.

Mrug’s study looks at the connection between diet and depression from another perspective. Instead of trying to use diets to treat the condition, is it possible that a poor diet may increase the risk of depression? And if so, what nutrients may play key roles?

Though her study still relied on self report measures, it does differ in two big ways. Firstly, she took urine samples, which allowed her to objectively measure the amount of sodium and potassium in her subjects’ diets. Then, she followed up with them a year and a half later, which is where she saw the first significant impacts of these nutrients on depression symptoms.

It May Be an Accumulation of Sodium Over Time

In the paper, Mrug and her collegaues propose that because depressive symptons didn’t emerge until a year and a half later, it may be the accumulation of sodium over time may be one way that diet influences depressive symptoms. So although an unhealthy diet may be playing a role in depressive symptoms, it may not be clear right away:

“It will be important to replicate our findings and to also investigate different time frames,” Mrug adds. “Currently we know very little about the lengths of time it may take for different nutrients to affect behavior.”

How Does an Unhealthy Diet Affect the Brain?

In the paper, the authors note that “only a handful of studies addressed role of diet in the human brain.” But Mrug proposes two ways that further studies might attempt to explain her findings.

Mrug suggests it may be worth investigating how specific dietary nutrients impact the brain.

“We know that specific nutrients directly affect the brain, which has an impact on emotion regulation,” she explains. “For example, studies with animals show that consumption of highly processed foods impairs frontal, limbic, and hippocampal areas of the brain, which then negatively affects behavior.”

Poor Diets Can Influence the Brain Through the Gut-Brain Axis

But there’s also convincing evidence that poor diets can influence the brain through the gut-brain axis — which is the idea that biochemical signals from microbiota in the gut, can influence mood.

Her paper cites a review paper from 2015, and in that paper, the authors argue that the established connections between unhealthy diet and depressions are “likely to be likely to be, at least partly, mediated by the gut microbiota.”

Mrug’s study doesn’t add any water to either of these theories, but it does help build a stronger case that diet impacts both physical and mental health. A poor diet is certainly not the only causes of significant mental health conditions like depression, but it may be a contributor that’s easy to overlook.