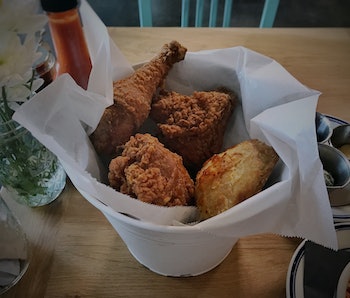 Hot fried chicken might not make sense as the perfect summer food, but science is here to make the argument that it is — provided it’s got that characteristic crunch as your jaws clamp down on a juicy bite.

In fact, that crunch is crucial to the flavor of fried chicken. Chains like Kentucky Fried Chicken can wax poetic about how “finger lickin’ good!” they are thanks to a top-secret, 11-herbs-and-spices recipe (allegedly revealed by the nephew of Harland Sanders’ second wife just last year). KFC’s primary competitor, Popeyes, also plays up its New Orleans roots with similarly top-secret recipe that differentiates itself in advertising for its unique Creole kick.

But the scientific truth is this: The crispiness of the outer breaded covering is perhaps the most important factor in how we perceive the taste of fried chicken.

The reason is brilliantly explained in a 2015 paper published in the journal Flavour from noted experimental psychologist Charles Spence, who has built his career around figuring out the intricate dance between our brains and diet. In this paper, Spence breaks down exactly why the sound of our food and how our ears hear that sound is crucial to the flavor of the food. Spence goes so far as to declare sound “the forgotten flavor sense.”

[W]hat we hear when we bite into a food or take a sip of a drink — be it the crunch of the crisp or the fizz of the carbonation in the glass — plays an important role in our multisensory perception of flavour, not to mention in our enjoyment of the overall multisensory experience of eating or drinking. What we hear can help us to identify the textural properties of what we, or for that matter anyone else, happens to be eating: How crispy, crunchy, or crackly a food is or even how carbonated the cava. Importantly, as we will see below, sound plays a crucial role in determining how much we like the experience. Indeed, it turns out that crispness and pleasantness are highly correlated when it comes to our rating of foods.

Basically, the way our anatomy is structured means we hear everything we’re chewing on a lot louder than others. That crunch is a key indicator to our brain that a food is fresh. That could be a product of when humans were hunters and gatherers, and slamming teeth down on a mushy carrot might have been a sign that nope, that carrot had gone bad and it was best not to eat it.

That might explain fruits and vegetables, but for non-naturally occurring grub, like potato chips and bacon, the evolutionary explanation takes a backseat to the acoustics of our mouth. That sound could irk people like Peyton Manning, who hates the sound of other people chewing and suffer from misophonia. But for others, the crispiness of food doubles as a fun side effect, an extra benefit, that boosts our experience of eating from just chewing to a culinary experience.

That culinary experience also has a lot to do with how our bodies find pleasure in fat and salt, the two key aspects of fried chicken. As nutritionist Steven Witherly breaks down in his thorough nutritional analysis of why we veer towards certain junk foods, fried chicken’s crispy batter packs on caloric density, which is satisfying. The characteristic saltiness of fried chicken invites more saliva to be produced, allowing us to break down that crispy skin more and ease our digestive processing.

But it’s the chicken skin that boosts this entire fried chicken high, creating a layer of salt and fat that we’re programmed to drool over. It also offers what Witherly calls dynamic contrast. Witherly has found in his research that we like the contrast of textures in our food — think Oreos or a creme brulee. With fried chicken, that contrast lies in the buttery tenderness of fall-off-the-bone meat wrapped in crunchy chicken. Witherly suspects the brain likes the edible neural challenge of the experience, something that is exciting and unique in tapping into both sensory desires of mushy and crunchy.

The American Chemistry Society’s Reactions video series released a deep dive into the chemistry of fried chicken on Wednesday that considers how the chemistry of deep-frying transforms bland chicken into gastronomic masterpiece. The secret lies in deep-frying at between 302-374 degrees Farenheit in canola, vegetable, or peanut oil — fats that importantly reach the hellishly high temperatures required to get crispy skin without smoking and setting your house on fire. But they also double as a triglyceride powerhouse — the chaining of glycerol and free fatty acids — which means that pinkish, floured chicken is on its way towards crunchy heaven.

Here’s where the chemistry of crispiness comes to play. When raw, battered chicken lays in the oil bath, convection gets molecules racing, causing hot oil to sink and colder oil to rise. Boiled water races out from the meat in the form of steam bubbles, doubling as an army of grease-fighter to keep the chicken as crispy as possible.

A triple-pronged chemical reaction starts to take place at this point. Hydrolisis — sucking water out of the chicken — makes the chicken crunchier by wrenching water out of the meat. Oxidation takes fatty acids, called volatile compounds, escaping the chicken and seeps into the oil. It’s why not-great fried chicken might have that fishy scent if the fry cook didn’t bother to keep oil fresh and instead just repeatedly dunked fried chicken in the same oil bath. And there’s also polymerization, where fatty acids join a kumbaya of sorts and become longer chains of fatty acids — translation: that unmistakably nutty, buttery, slick taste of fat that our bodies crave and adore.

Which brings us back to the original point here. Throughout the cooking process, the chemistry of fried chicken is reliant more so on keeping heat consistent, reducing water retaining, and concentrating fat. That’s all to say that flavor is actually secondary in the chemical process, backing up Spence’s conclusion that fried chicken’s flavor is actually derived from how it sounds, not how it tastes.

It’s why snap! crackle! pop! might make a better tagline than simply being a fun jingle, why crispy bacon and crispy fries have such a cultural cache compared to their wimpier cousins, and why noshing on crispy fried chicken in the middle of summer’s lazy days make picnics that much better.