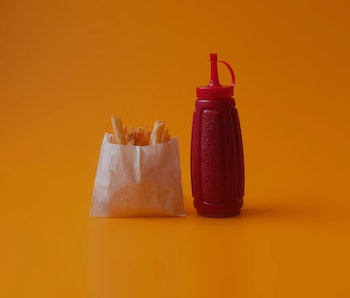 Earlier this month, a trial showed that ultra-processed foods (think frozen dinners and shelf-stable pastries) have a significant effect on appetite. Right on the heels of that study comes another big hit to the food items that have historically made up over half the calories in the American diet. Two papers released in The BMJ on Wednesday link ultra-processed foods to heart disease and higher risk of death.

The French heart disease study, led by nutritional epidemiologist Bernard Srour at the Sorbonne Paris Cité Epidemiology and Statistics Research Center, revealed a 12-percent higher risk of heart disease for every 10-percent increase in ultra-processed foods in someone’s diet. The Spanish mortality paper, led by Maira Bes-Rastrollo, Ph.D., a faculty member of the University of Navarra’s Department of Preventative Medicine and Public Health, showed a 62-percent higher risk of death.

The combined results are not good news, and both researchers tell Inverse that their work is starting to point to a global processed foods problem.

"It might be a beginning of a public health problem.”

“The increase of the purchase and the consumption of ultra-processed food can increase the economic and human burden of chronic diseases, so it might be a beginning of a public health problem,” Srour says.

The Consequences of Ultra-Processed Foods

In both new papers, the authors illuminated emerging threats by analyzing data from thousands of participants who were part of two national surveys: the SUN project, which included data from 19,899 Spanish university graduates, and the NutriNet-Santé study on 105,159 French adults. In both surveys, the teams classified what percentages of each person’s diet was made up of processed foods, according to the NOVA guidelines, a World Health Organization-recognized list that groups food items into four categories.

Ultra-processed food includes items like mass-produced snacks, meats with additives other than salt (like nitrite), frozen or shelf-stable meals (like fish nuggets), or any foods that contain a myriad of flavoring agents or dyes. In the French study, people who had the highest consumption of those foods (the top quarter in the population) had 13-percent higher risks of coronary heart disease and 11-percent higher risks of cerebrovascular disease — conditions that affect blood flow to the brain.

The Spanish study was responsible for the most startling statistic — a 62-percent increase in all cause mortality for those who ate more than four servings of ultra-processed food per day. But it also noted a dose-dependent relationship, which Bes-Rastrollo says is critical. For every additional serving of ultra-processed foods, the risk of death increased by 18 percent.

Importantly, these two studies can’t directly show causality, but the researchers aren’t ready to let ultra-processed foods off the hook. Earlier research, including the clinical trial at the US National Institutes of Health — which showed ultra-processed foods increased daily calorie consumption — has pointed to effects of ultra-processed food on weight gain and appetite. And these results both held up even after Srour and Bes-Rastrollo adjusted for nutrimental content like sodium or sugar intake, as well as lifestyle factors like weight gain.

Honing in on a Causal Relationship

The “causal relationship” that Bes-Rastrollo and Srour allude to is, at this point, some undiscovered aspect of processed foods that explains why they seem to affect appetite, heart disease risk, and all-cause mortality. These latest studies can’t answer that question, but they can certainly float some ideas.

On one hand, there’s still nutritional composition. In the French paper, the authors note that ultra-processed foods “often have a higher content of total fat, saturated fat, added sugar, energy density, and salt, along with a lower fiber and vitamin density.” They noted this in their data, specifically showing that sugar products, which have been linked to cardiovascular disease and death, made up 28 percent of the ultra-processed foods in Spanish diets (the largest group). It’s also possible, says Bes-Rastrollo, that processed foods simply replace healthier options, leading to dire consequences that way.

But nutrition alone doesn’t seem to explain the results, either. To explain that, both scientists suggest that it’s worth looking in a few directions.

On one hand, Bes-Rastrollo points towards the cumulative effect of food additives over time, like dyes or emulsifiers. Already, research has shown that propionate, an additive in shelf-stable pastries, can affect the way the body processes glucose — a warning sign for diabetes. Additionally, artificial sweeteners like aspartame, sucralose, saccharine, neotame, advantame, and acesulfame potassium (Ace-K) have been linked to changes in gut microbiota, so that too could be an avenue for research.

Finally, there’s the idea that the issue lies in the manufacturing process itself.

“Ultra-proccessed foods may elevate the exposure to contaminants and environmental chemicals,” says Bes-Rastrollo. “The heating in the food processing produces contaminants such as acrylamide. Meat processing can produce carcinogens. Plastic packaging may contain bisphenol A.”

Again, these are only ideas at this stage, and neither study can prove them. But these are just some things that both scientists, with their concerning results in hand, are starting to think about. For the time being, their advice is far simpler: It might be worth cutting back on processed foods even if we don’t yet know what exactly makes them so unhealthy.

Results: 335 deaths occurred during 200432 persons years of follow-up. Participants in the highest quarter (high consumption) of ultra-processed foods consumption had a higher hazard for all cause mortality compared with those in the lowest quarter (multivariable adjusted hazard ratio 1.62, 95% confidence interval 1.13 to 2.33) with a significant dose-response relation (P for linear trend=0.005). For each additional serving of ultra-processed foods, all cause mortality relatively increased by 18% (adjusted hazard ratio 1.18, 95% confidence interval 1.05 to 1.33).