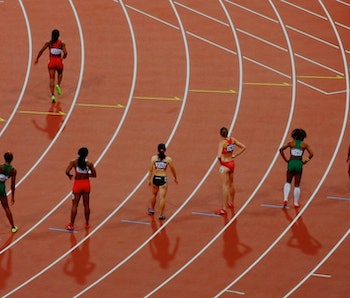 Elite athletes are some of the only people in the world who probably don’t have to worry about being too sedentary. But strangely, the fittest people on the planet are doing way worse than many average people in one important aspect of physical health. According to research released Friday in the British Dental Journal, the elite athlete lifestyle pushes their dental health to the edge.

This paper was conducted by a team of dental experts at University College London’s Centre for Oral Health and Performance — where an entire research group is dedicated to the oral health of elite athletes. In 2018, that group released a paper showing that 49.1 percent of elite athletes in their sample had untreated tooth decay and 77 percent had inflamed gums. A 2009 survey of English adults showed obvious tooth decay in only 31 percent of people. In the US population, by comparison, the CDC estimates that 27 percent of adults have untreated tooth decay.

In this new paper, this same UCL team shows that even though elite athletes have these poor markers of dental hygiene, they also tend to have much better oral health habits than non-athletes. Ninety-four percent of these athletes (many of whom were “podium contenders” at the Rio Olympics) said they brush their teeth twice per day, and 43.7 percent flossed — whereas only 43 percent of the general population of England, Wales and North Ireland reported brushing twice a day, and 21 percent reported using dental floss.

So why, despite their better oral care habits, do athletes struggle with tooth decay?

Lead study author Julie Gallagher, a Ph.D. candidate at UCL, tells Inverse that part of it comes down to a hard reality of a life based around exercise: There’s a lot of sugar around.

“Sport is excellent for health and wellbeing, but the demands of training and competition can increase the risk of decay and acid erosion, so athletes need to have excellent oral health habits,” says Gallagher.

The team also reports funding from GlaxoSmithKline, a pharmaceutical company that makes a variety of oral health products — though the authors declare no individual conflicts of interest.

For the rest of the population, there are clear health risks associated with high sugar intake — from metabolic disease to tooth decay. In this study, 28.2 percent of the athletes were “high consumers” of sugar, and 46 percent of them said that they could cut back on their sugar intake. But the real problem stems from the need to fuel yourself during intensely strenuous athletic efforts.

During long endurance events, a well-trained athlete will burn fat as opposed to glycogen — a carbohydrate store that can be quickly converted into energy. But when it comes to the sprint at the end of a race, (or for shorter efforts like a sprint race) keeping those glycogen stores from running out can make or break a competition — and that’s often where energy gels or sugary gummies come into play.

For example, during the rigorous mountain stages of the Tour De France, some professional teams require that athletes consume energy drinks and gels to keep riders ready to break away from the group or chase down another attack at any moment. Not all athletes go straight for the sugary stuff (carbohydrates can be found in other, less sweet sources).

Gels, bars, and drinks just happen to be a conveniently packaged, and in most cases, an easily digested way of fueling during an effort — but as Gallagher’s study found, they’re also not great for oral health.

"Let them know you are an athlete so that they can provide enhanced preventive advice and care."

It’s a difficult tradeoff for an elite athlete, but Gallagher adds that, for someone who exercises seriously and is worried about dental care, there are ways to cut back a little bit.

“Avoid sugar-laden sports/energy supplements where you can and think about using ‘real’ food to provide energy for an active lifestyle,” she says.

Failing that, she adds that it might just be worth taking a bit more care with oral care once the competition is over. Atheltes already have to be careful about other types of overuse injuries, and oral health should also be on their radar.

“Visit your dentist regularly for checks and let them know you are an athlete so that they can provide enhanced preventive advice and care,” she says.

Method: This was a cross-sectional study. We provided oral health screening for 352 elite and professional athletes from June 2015 to September 2016; 344 athletes also completed a questionnaire.

Results: The median age was 25 years (range 18-39) and 236 (67%) were male; 323 (94.2%) said they brush twice daily while 136 (40%) said their most recent dental attendance was within the previous six months. Ninety-seven (28%) would be assessed as high consumers of sugar in their regular diet. The use of sports nutrition products was common with 288 (80%) reporting the use of sports drinks during training or competition but were positive about behaviour changes.