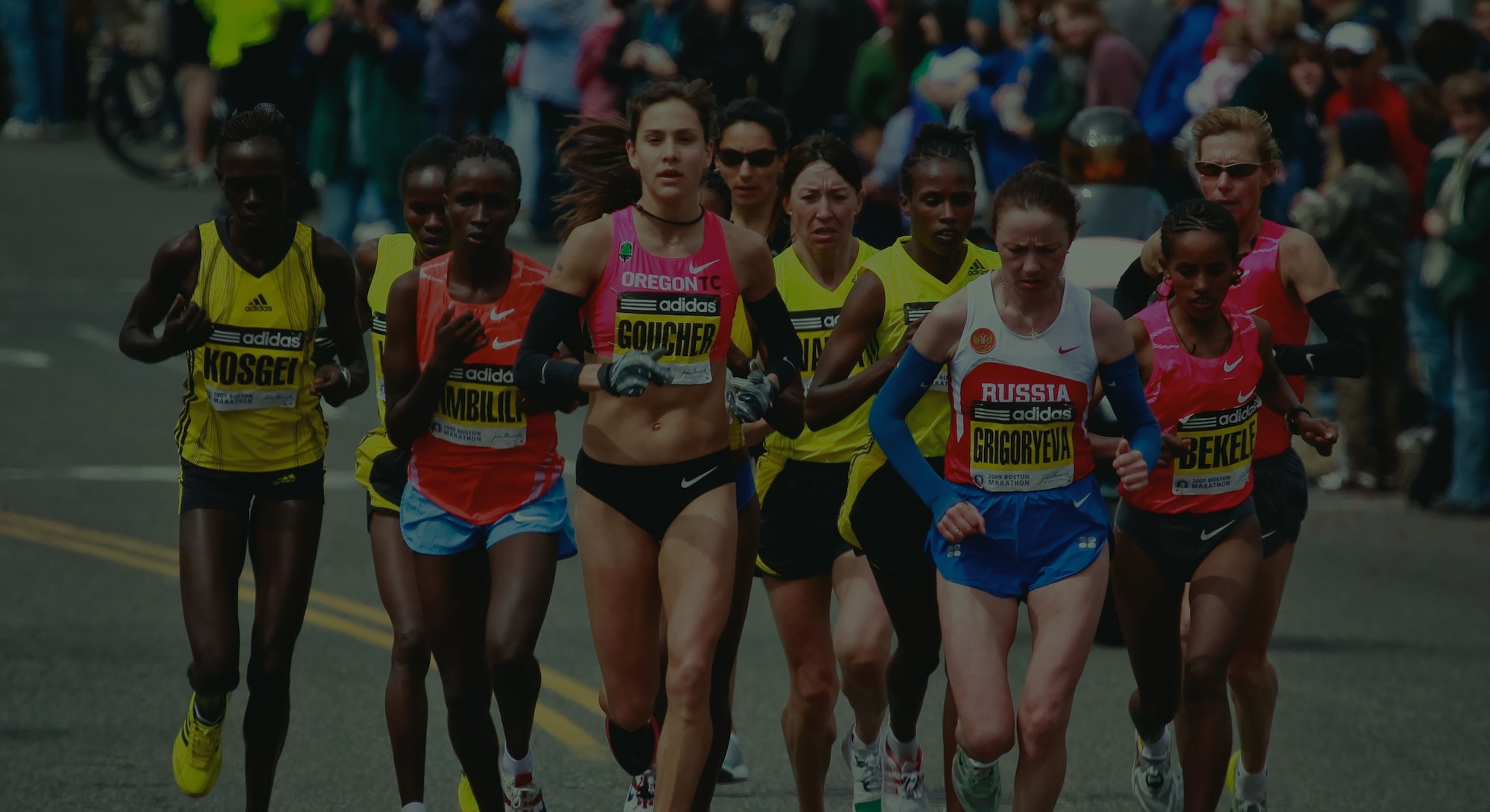 On April 15, more than 20,000 runners will stand on the start line of the Boston Marathon, ready to begin a 26.2-mile journey from Hopkinton to the center of the city. “Marathon Monday” attracts both elite marathoners and charity runners looking to test themselves on one of long-distance running’s most famous routes. But some equally eager runners will never make it to the start line.

Training for any marathon requires one thing over everything else: miles. Those miles can lead to stress fractures, micro-cracks in bone that occur when a runner trains long and hard, with little rest in between. These can sideline a runner for six to eight weeks — long enough to miss a competition like Boston, if it happens too close to race day. Scientists at Vanderbilt University, however, have a plan to prevent that heartbreak long before it happens.

“I worry about stress fractures a lot,” Victoria O’Neil, a semi-pro runner for Strava’s running team who ran the California International Marathon in 2018, tells Inverse. “It’s hard, because we often have such high pain tolerance as runners that we keep running through the pain until it’s too much. You can do everything right and still end up with one.”

"We often have such high pain tolerance as runners that we keep running through the pain until it’s too much."

Overuse injuries like stress fractures are an accepted part of life for distance runners, but new, eager athletes who lack the guidance of a coach or doctor are often unaware of the risk. Rebecca Breslow, Ph.D., an orthopedic surgeon at Brigham and Women’s Hospital and team doctor for the hospital’s Stepping Strong Marathon team, sees their injuries all the time. Inspired by the idea of completing Boston, they push themselves dangerously past their own limits.

“There tend to be a lot of newer marathoners who are running the marathon because they’re personally invested in the charity cause,” she says. These runners “really feel like they need to run no matter what.”

But what is an accepted part of running culture doesn’t have to be that way forever.

The Vanderbilt University team wants athletes to know if they’ve pushed themselves too far by measuring stress on their bones — stress that is so often ignored by zealous runners.

“A big motivator in this type of mechanics research is to provide athletes, trainers, coaches, and other researchers with tools that can provide actionable data,” says Emily Matejeivich, a Ph.D. student at the Zelik Lab for Biomechanics and Assistive Technology at Vanderbilt University, which is building the device. “In the context of overuse injuries, that actionable data means indicators of when you’re at heightened risk for injury.”

The solution seems simple: Measure how much stress is striking the bones, then adjust training accordingly. But as the Zelik lab has discovered, scientists have been working with incorrect assumptions about running injuries for a number of years, making it difficult to collect the actionable data they seek. To solve this issue for runners, they had to return to the bones themselves.

“This Intuition is Just Wrong.”

It may seem counterintuitive, but bones are constantly breaking down and rebuilding themselves. Runners get stress fractures when they don’t allow themselves the time they need to heal, explains Dr. Katherine Rizzone, an assistant professor of orthopedics at the University of Rochester School of Medicine and Dentistry.

“If you exercise a lot — let’s say you’re running 40 to 50 miles a week because you’re training for a marathon — you’re breaking down more bone,” she says. “I think a big thing that a lot of high-level runners, or high school athletes or college athletes don’t do a lot of is they don’t rest and recover. We talk a lot about letting those bones rest.”

The Vanderbilt team, led by assistant professor of mechanical and biomedical engineering Karl Zelik, Ph.D., imagines a wearable that can give an athlete a hard number that tells them it’s time to stop. To calculate this number, it must measure exactly how much stress a runner is putting on crucial bones, like the shins.

At first, doing so seemed easy: A well-established metric called ground reaction force already measured the exact force generated when a foot hits the pavement. But when the Zelik lab tested that metric in a small sample of ten runners, they found something strange. It underestimated that force by a significant amount.

In a study published in PLOS One in January, the Zelik lab raised their concerns about ground reaction force, arguing it should not be used to design wearables to sense stress fracture.

“There have been some misinterpretations of bone mechanics studies, that, I think, contribute to misconceptions in the literature and how wearable technologies are being developed in order to monitor our running-related injury risks,” Zelik says. “It intuitively makes sense to you that how hard your foot hits the ground is related to how much force is on your bone. It turns out that this intuition is just wrong.” Their findings still need to be replicated but have received positive attention from other biomechanics researchers.

A runner’s bones experience forces between six to 14 times their body weight, explains Matejeivich. When their foot hits the ground, it creates forces about two to three times their body weight — that’s what ground reaction force measures. But there are other forces at play, generated by surrounding muscles that support the foot. The metric scientists have been using for so long misses the complete picture. To really get a sense of how much load the bone experiences, the ideal wearable must analyze muscle movement too.

"It turns out that this intuition is just wrong."

The Zelik team has filed a provisional patent on a device that incorporates many different sensors to quantify how much force is on the bone and tracks how the foot moves through space. At this point, they’re tight-lipped about it: “Probably in several months, we’ll come out with some more information on that,” Zelik says. For now, he hopes wearable designers looking to help runners will understand that they’re working with flawed assumptions about the forces that contribute to these injuries in the first place.

“What we’re calling attention to is the way that people are trying to predict if someone’s at risk for developing one of these injuries is flawed. They’re looking at a signal that is not actually telling them about the loading on the bone,” he says.

Zelik points to over 50 scientific papers per year between 2015 and 2017 that used ground reaction forces to measure bone-loading. What begins in biomechanics labs, he argues, very soon ends up influencing the running community.

The success of the Zelik lab’s future wearable will hinge on the willingness of runners to heed its warnings. Donald Megerle, a legendary coach of the Tufts University’s marathon team who has led over 2,200 runners to Boston Marathon completion since 2004 using a scientifically rigorous training program, knows from experience that most runners find it hard to rest, even if they know they have to. Perhaps a wearable that tells an athlete when they’re personally at risk might be the push they need to stay still.

“When we do have kids with stress fractures and they take time off, they worry,” Megerle tells Inverse. “They feel they’re going to lose their training. We give them article after article and fact after fact. When you’re inactive, the body is getting better.”

Playing through injury is a problematic part of sports culture, which places a premium on mental toughness. Wearables might be what it takes to help inject logic into the dogged desire to train through pain. Sensors that detect concussive hits in football players, for instance, can tell coaches it’s time to take a player off the field, even if they want to stay in the game — and to some degree, they’re actually being used. An athlete needs to be told when playing through the pain just isn’t worth it, especially if there isn’t a watchful coach like Megerle around.

Some runners are already encouraged by the Zelik lab’s early research. “I remember telling kids to run on grass to reduce the shock,” says Tom O’Neil, a former track runner for Stanford University. “But it never really seemed to work. This article seems to validate that result.”

"“When we do have kids with stress fractures and they take time off, they worry"

Rizzone, the Rochester orthopedics professor, believes the Vanderbilt team is onto something. “I support their theory that we need to pay attention to the muscles that are attaching to this bone. I think in the past, from the literature I know, we’ve ignored that,” she says. “For instance, some running store is gonna say, ‘Oh, you just need fancier shoes’, or ‘you just need these inserts.’ You need to pay attention to the muscles. I support that because in the end, what helps people not have this injury happen again is to have those muscles in a good state of stability.”

Good coaches create highly specific training programs designed to protect runners’ muscles, but these programs are the products of years of experience that many runners who set out to train for Boston will not have.

A wearable will never be a substitute for a wizened coach, but it will be able to tell athletes, particularly first-time marathoners, what a good coach might say: To run quickly, you sometimes have to slow down.

Victoria O’Neil learned after a devastating stress fracture in college that it was caused by “trying to do too much at once.” She adds: “I’ve since been able to run higher mileage than ever and do a marathon, but I’m also prioritizing sleep, doing as much as I can to reduce stress, limiting my alcohol intake, and staying on top of my nutrition and strength.” Megerle builds in time for his marathoners to get the rest they need. He begins training weeks earlier than most comparable teams to create a bit of leeway, in case his runners’ bones give out before race day.

Nobody is looking out for the amateur athletes who run for charity, but the hope is that a wearable will encourage them to look out for themselves, so they can run the race they train so hard to compete in. “These folks are raising money and participating for the best possible reasons,” says Breslow. “Whether we come at it from a technology standpoint or more of a psychosocial standpoint, it’s certainly an area worth of attention, so people can be healthy to go forward with their races.”

Watching his athletes come bounding towards Copley Square, healthy, but exhausted, is what keeps Megerle coaching year after year. He waits for every one of them to finish, and hugs them when they cross the line.

“As a coach, I’ve won national championships in swimming, but I never had the same feeling I have when I watch a runner complete that marathon, and cross that finish line,” he says.

One day, a wearable might be the key to helping new runners train smart and hard enough to experience that indescribable feeling for themselves. The trick is getting the underlying science right first.

“They hug me at the end of the run, and it’s indescribable,” says Megerle. “It’s a level of esteem and achievement that’s like no other.”