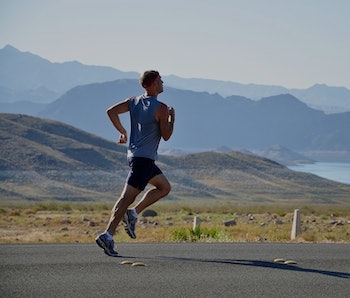 For months, a team of researchers in San Diego have been watching genetically engineered mice work out.

The scientists are trying uncover the effects of a tiny gene that hasn’t worked properly in humans for millions of years. The mice recently finished their workouts and the results, published in Proceedings of the Royal Society B, suggest that this genetic detail not only makes humans great runners, it could potentially play an important role in our own evolution.

There are a lot of theories about what features differentiated human ancestors from the pack. One even has it that they used magic mushrooms and figured out which tools to use. Distance running at a moderate pace (also called the “endurance running hypothesis”) is another theory, because it is one of the few physical things that humans seem to be good at, explains Ajit Varki, Ph.D., the study’s senior author and a professor of cellular and molecular medicine at The University of California, San Diego.

Varki’s paper presents a theory centered around one a crucial genetic change that he believes that gave our muscles the power to run those distances and colonize much of the world. It’s not a gene, but rather a deletion of some crucial DNA that makes one useless. This paper suggests that this crippled gene, called CMAH, occurred roughly two million years ago, around the same when handfuls of early human ancestors begun to leave Africa.

“Two million years ago emerges this lineage called Homo that eventually gave rise to us. They probably had strong muscles like early modern humans, and they probably started running and hunting, and doing all kinds of things,” Varki tells Inverse. “So we noticed the coincidence: that our mutation probably happened around the same time.”

The Genetic Origin of Homo ?

Today, modern humans still don’t have a functioning CMAH gene, but many other creatures from cows to chimpanzees do. When Varki knocked out CMAH this gene out in mice with muscular dystrophy, he noticed that they exhibited uncharacteristically human-like symptoms of the disease. But they also were good at another distinctly human trait: distance running.

“So a grad student grabbed a treadmill and we gave it a try,” he says. “Low and behold, the mice climbed straight out of the box. Even without training, they were already better at running than the original mice.”

The mice without CMAH had 30 percent greater running endurance than the control population. On average, they ran 20 percent further, and 12 percent faster.

He also noticed another important aspect that he believes strengthens his case that losing CMAH helped to cement the importance of distance running in human evolution. Mice with CMAH knocked out saw fertility decreases with mice who still had the gene. In short, they were far more successful breeding with other mice without CMAH. Had this effect occured in humans millions of years ago, it may have helped to fix the deletion in the population, creating a sustained genetic change that exists to this day.

“If we put those two things together, but we’re still looking for exact evidence of this, this suggests that this is the origin of the genus homo,” he adds. “

But today, Vary adds that this deletion is a double edged sword. Although the mice with CMAH deletions were superb athletes, they were also prone to diabetes to a common disease that affects humans today. Even at baseline, these mice had sustained high blood glucose levels, one of the diseases’ leading risk factors.

“It turns out these mice are more prone to type II diabetes, he says. Everyone thinks of diabetes as a really bad thing. But if you’re living through a period of starvation it’s not a bad idea to keep your glucose levels up.”

These days, that’s no longer the case but the deletion remains, perhaps a former evolutionary advantage that has become a modern day curse.

A Clue in the Cellular Sugar Chain

The functional loss of CMAH in both these mice and humans creates a change in the way muscles process oxygen, making them more resistant to fatigue. Varki’s experiment showed this: mice with CMAH reached muscular fatigue three minutes into a forced run test, whereas those without the gene lasted seven minutes on average.

But he also notes that CMAH has effects on every cell in the body not just muscle cells. In particular it affects a “dense forest” of sugar chains that lie on every cell. Forming the last link of these chains are siasalic acids. Many creatures in the world producetwo types of siasalic acids because they can convert one type to the other through an enzyme (a molecular worker that makes things happen in the body) produced by the CMAH gene. But humans can’t makes this conversion happen.

“In humans we’ve lost the ability to convert the first kind to the second kind,” he explains. “So we are sort of in excess of one kind, and lacking the other kind. And that sounds like a subtle thing, but these sialic acids I’m so certain have so many functions.”

This tiny biochemical difference doesn’t directly affect how our muscles process oxygen, but it is how Varki’s team will search for evidence to support his hypothesis that this gene is an underpinning of the genus Homo in the fossil record. This siasalic acid that humans have in abounds leaves behind a molecular trace: a metabolite that can survive in fossils. The next step is to see when in the fossil record we start to see higher levels of that molecular red herring.

It’s a simple game of detective work, if he can get his hands on the few, precious specimens we have to and perform this research in a research in a non-destructive way. Tha said this experiment will also have to be replicated — the mouse version of CMAH could differ from the human one, after all.

“It’s just one of those hunches where everything fits,” he adds. “But the proof has to come from actually looking at fossils.”

Even if he can’t confirm his evolutionary hypothesis, his experimental results have revealed an important fact: even if you hate to run, your genes indicate probably better at it than you think.