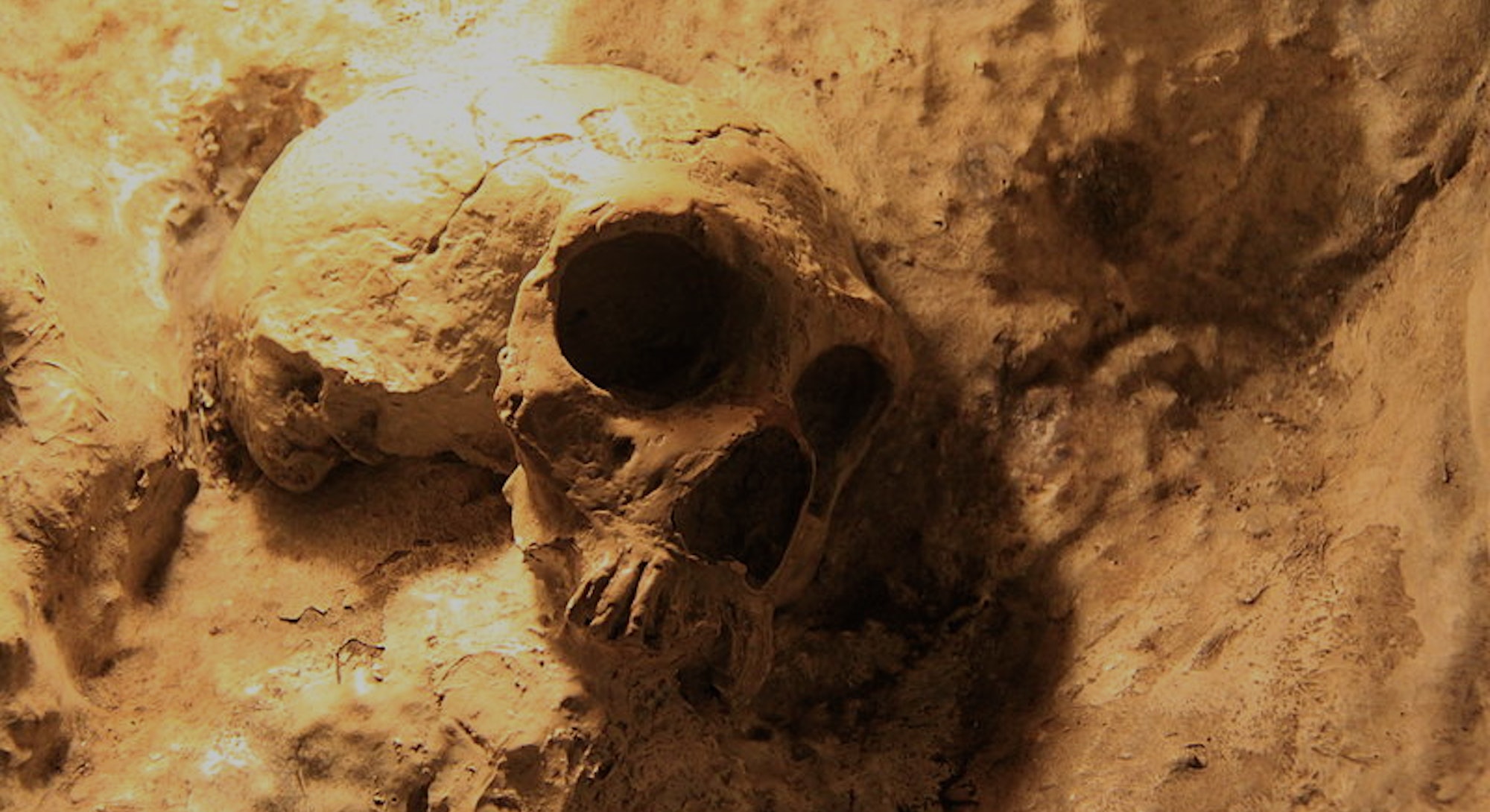 If you were to encounter humans from 200,000 years ago, you might be struck by how much they look like humans in 2018. Anatomically modern and large-brained, with faces and teeth not dissimilar to our own, these early Homo sapiens went to war, formed relationships, and created tools, just like us. There’s still plenty to learn about our direct evolutionary ancestors, but this year, thanks to the widespread use of genomic sequencing, scientists gave us an unprecedented glimpse into how humans came to be. Here, Inverse lists everything we’ve learned about human evolution in the past year.

While we are the only hominids to walk the Earth today, this year genomic evidence proved that the DNA of some people contains traces of Paleolithic trysts between humans and other Homo species, like the Neanderthals and the Denisovans. A decade ago, scientists would have been extremely skeptical. University of Buffalo evolutionary anthropologist Omer Gokcumen, Ph.D. tells Inverse that it’s only in the past five years that scientists have been able to confirm that early Sapiens didn’t only hang out with other Sapiens.

“You can think of the world 100,000 years ago like a Lord of the Rings world, where different, pretty smart human-like creatures are roaming,” Gokcumen says, explaining that this situation is called interaction dynamism. “One of them would be our ancestors in Africa, but there would also be other species like Neanderthals, that we could tell were different — but not different enough to not interbreed and produce fertile offspring.”

This year, academics including Gokcumen published an extensive amount of research filling in the details of this Tolkien-esque world, furthering our understanding of how our minds, bodies, and behavior came to be. Learning what it means to be human, it seems, means learning about really old humans.

In July, Gokcumen and a team of scientists announced in Molecular Biology and Evolution that a protein in the saliva of people from sub-Saharan Africa indicates that they carry genetic evidence of an unknown hominin ancestor. The saliva protein became a point of interest when University of Buffalo oral biologist and co-author Stefan Ruhl, Ph.D. compared the saliva proteins of primates and humans. Typically, these proteins look very similar. That’s why it was startling when they discovered that one protein from the sub-Saharan African population was revealed to be very different in size than the others.

This protein, known as MUC7, is thought to be the result of genetic material left over from mating between Homo sapiens and a ‘ghost’ species as recently as 150,000 years ago. Gokcumen believes this mysterious species was confined to Africa and split from Homo sapiens’ evolutionary path around three million years ago. This study is further proof that we, in Gokcumen’s polite words, “absorbed different populations that lived around us” — mating with other Homo species, many of which are still unidentified.

“Our study adds to this generally more colorful picture of human history, and it’s becoming very clear that it’s not as simple as we previously thought,” says Gokcumen. “It’s become very clear to researchers that even though the majority of our genome can be traced back to particular, Homo sapien ancestral population, there’s observable evidence that other, smaller populations made their way into our modern human gene pool.”

2. Newly Discovered Fossils Pushed Back Our Origins by 100,000 Years

Scientists announced a textbook-changing discovery in June, writing in Nature that they discovered three Homo sapiens fossils that date back to approximately 300,000 years ago. Previously, the oldest Homo sapiens found were 200,000 years old. These fossils were excavated in Jebel Irhoud, Morocco, contradicting the popular claim that our species evolved from a “cradle of mankind” in East Africa.

“The dating was a bit, wow!” co-author Jean-Jacques Hublin, Ph.D., said in his interview with Inverse in June. “No one imagined these remains could be that old. In the meantime, the interpretation of the fossil evidence suddenly made much more sense.”

Research published in October by scientists from the Max Planck Institute for Evolutionary Biology added further detail to what we know about the Neanderthal genes some humans carry around today. In the American Journal of Human Genetics, the team explained that Neanderthal DNA strongly influences the hair and skin color of the one to five percent of European and Asian people who carry this DNA. Neanderthal alleles also shape whether people have lighter and darker skin tones and determine hair color, indicating that ancient hominids had many different hair and skin colors, too.

Drawing from a sample of 112,000 study participants, the scientists additionally determined that there was a significant link between people who carry Neanderthal DNA and those who had experienced “loneliness of isolation, frequency of enthusiasm or disinterest in the last two weeks, and smoking status.”

4. The Remains of One of the Oldest Americans Were Found in Mexico

Human remains found in 2012 in Mexico’s Tulum system of submerged caves were re-analyzed this year, leading scientists to believe the remains are the oldest osteological remains of humans in the Americas. In a paper published in PLOS One in August, the scientists behind the research, led by Heidelberg University paleoecologist Wolfgang Stinnesbeck, Ph.D., explain the bones likely belong to a young man who lived around 13,000 years ago.

Stinnesbeck and his team dated one bone, the pelvis, by measuring the levels of uranium, carbon, and oxygen isotopes within it as well as that within the stalagmite that had grown through it. Calcite layers, which contain oxygen and carbon isotopes, store information about climate and precipitation data, which helps determine an age.

The researchers claim this discovery adds further proof to the theory that humans came to the Americas at least 5,000 years before the Clovis, a prehistoric group of people who have previously been called the first Americans.

Read more: A Stolen Human Skeleton Found in 2012 Might Be Americas’ Oldest

5. Neanderthal Brains Grew At a Slower Pace Than Human Brains

In a paper published in Science in September, an international team of scientists reported that they found 13 ancient Neanderthal skeletons in a 49,000-year old cave in northern Spain. To the astonishment of the researchers, one of the specimens, which they named El Sidron, was a nearly complete specimen that belonged to a boy who died when he was almost eight years old.

El Sidron’s teeth and endocranial features suggested that his brain growth wasn’t done by the time of his death, giving away his age. A human brain is essentially grown to its full size by the time a person is six, but El Sidron’s brain was still growing at a period when the brains of his peers had long since stopped. This extended period of brain growth, the study authors hypothesize, suggest Neanderthal children spent more time acquiring cognitive skills than human children.

But perhaps the most marvelous revelation from this study was the fact that, barring brain growth, Neanderthal children were much like human children in terms of physical growth and maturation, reducing the gap between us and our not-so-distant cousins.

6. Some of Man’s Earliest Ancestors Were Furry Rat-Like Creatures

If you imagine your ancient human ancestors, you might an envision a bulky, strong caveperson, ready to hunt and provide. But if you look past that ancestor and deeper into their lineage, you’d see a something that looks a lot like a rat.

In November, scientists reported in Acta Palaeontologica Polonica that they excavated two fossilized teeth belonging to this rat-like creature in the rocky cliffs of Dorset, England. The teeth are believed to be 145 million years old, and the scientists claim they are the oldest evidence of this human ancestor ever found. The claim is contested by a different team of scientists, who say their finding is the oldest at 160 million years old, but their study’s validity is still being debated.

The nocturnal, placental mammal is thought to be an ancestor of mice, pygmy shrews, blue whales and elephants — putting us humans in good company within the animal kingdom.

7. Human Speech Is Our Evolutionary Advantage Over Monkeys

In a very Planet of the Apes-like turn of events, scientists announced in July that the reason that monkeys can’t talk like humans isn’t because of their vocal anatomy but their neural wiring. In a Science study led by the University of Vienna’s W. Tecumseh Fitch, Ph.D., scientists used x-ray videos to examine the vocal tracts of living macaques while they ate, made facial displays, and vocalized monkey sounds. Analysis revealed that their vocal tracts could “easily produce an adequate range of speech sounds to support spoken language,” disproving previous theories that both human anatomy and the human brain give us our specialized ability to speak.

Instead, Fitch argues that the “evolution of human speech capabilities required neural changes rather than modifications of vocal anatomy.” This revelation likely offers a clue to a bigger mystery: Understanding why human language emerged in the first place. Maybe we’ll find that out this year.