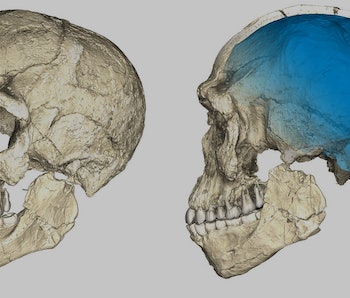 In a pair of articles published in Nature Wednesday, an international team of researchers show that Homo sapiens fossils uncovered at the site of Jebel Irhoud, Morocco, had facial structures nearly identical to that of humans alive today, although they lived about 300,000 years ago. The discovery suggests that Homo sapiens emerged quickly in Africa thanks to technological and biological innovation and soon spread across the continent.

“We have to change our textbooks,” Jean-Jacques Hublin, paleoanthropologist with the Max Planck Institute and lead author one of the papers, tells Inverse by email. “Our species did not emerge suddenly 200,000 years ago in a restricted ‘Garden of Eden’ somewhere in East Africa. It has a much older and more complex history. If there was ever a Garden of Eden for H. sapiens, it had the size of the African continent.”

The biggest surprise was the age of the site, Hublin says. “The dating was a bit, wow! No one imagined these remains could be that old. In the meantime the interpretation of the fossil evidence suddenly made much more sense.”

Other early Homo sapiens sites include one in Ethiopia — dated 195,000 years ago — and another one in South Africa, estimated to 260,000 years ago. The specimen from South Africa, from the Florisbad site, is controversial because it is only a partial skull; this new research corroborates the possibility that Homo sapiens could have been in that part of Africa so long ago.

Jebel Irhoud in Morocco was first discovered in the 1960s, with more recent excavations beginning in 2004. So far, 22 hominin fossils have been pulled out, representing at least five individuals. The dig has also yielded high-quality flint tools and the bones of the animals that these people hunted out on the savannah, especially gazelles and zebras.

Those flint tools turned out to be the key to the new age estimates for the site. It turns out that many of them had been heated in a fire in the past, and the researchers used thermoluminescence dating to estimate when that had taken place. They also applied new dating methodologies to the fossils themselves, which again concluded that these people lived and died about 300,000 years ago.

Those flints may also be key to the story of how we became human. “The stone artifacts from Jebel Irhoud look very similar to ones from deposits of similar age in East Africa and in southern Africa,” says Max Planck Institute archaeologist Shannon McPherron, an author of the second study, in a release. It could be that new hunting technologies gave our ancestors a competitive advantage that allowed them to quickly take over the continent.

“Around 300,000 years ago we see the spread of the first Middle Stone Age stone technology all over Africa. It might be a proxy for the spread of this species,” says Hublin. This behavioral change would have gone hand in hand with genetic changes, which showed up first on our faces.

“They had a face you could see in the street today, but other aspects of their anatomy were quite different, especially regarding their brain organization,” says Hublin. The brain cases of these early Moroccans were large, but more archaic in shape. We’ll never know exactly what went through their heads, but if we met them today, we would recognize them as our cousins.

The first study, by Hublin et al., describes new fossil finds at Jebel Irhoud and places them within an Africa-wide story of Homo sapiens evolution.

Abstract: Fossil evidence points to an African origin of Homo sapiens from a group called either H. heidelbergensis or H. rhodesiensis. However, the exact place and time of emergence of H. sapiens remain obscure because the fossil record is scarce and the chronological age of many key specimens remains uncertain. In particular, it is unclear whether the present day “modern” morphology rapidly emerged approximately 200 thousand years ago (ka) among earlier representatives of H. sapiens or evolved gradually over the last 400 thousand years. Here we report newly discovered human fossils from Jebel Irhoud, Morocco, and interpret the affinities of the hominins from this site with other archaic and recent human groups. We identified a mosaic of features including facial, mandibular and dental morphology that aligns the Jebel Irhoud material with early or recent anatomically modern humans and more primitive neurocranial and endocranial morphology. In combination with an age of 315±34 thousand years (as determined by thermoluminescence dating), this evidence makes Jebel Irhoud the oldest and richest African Middle Stone Age hominin site that documents early stages of the H. sapiens clade in which key features of modern morphology were established. Furthermore, it shows that the evolutionary processes behind the emergence of H. sapiens involved the whole African continent.

The second study, by Richter et al., dates the site to about 300,000 years ago, and suggests that Homo sapiens may have spread across Africa around that time, along with Middle Stone Age technology.

Abstract: The timing and location of the emergence of our species and of associated behavioural changes are crucial for our understanding of human evolution. The earliest fossil attributed to a modern form of Homo sapiens comes from eastern Africa and is approximately 195 thousand years old, therefore the emergence of modern human biology is commonly placed at around 200 thousand years ago. The earliest Middle Stone Age assemblages come from eastern and southern Africa but date much earlier. Here we report the ages, determined by thermoluminescence dating, of fire-heated flint artefacts obtained from new excavations at the Middle Stone Age site of Jebel Irhoud, Morocco, which are directly associated with newly discovered remains of H. sapiens. A weighted average age places these Middle Stone Age artefacts and fossils at 315±34 thousand years ago. Support is obtained through the recalculated uranium series with electron spin resonance date of 286±32 thousand years ago for a tooth from the Irhoud 3 hominin mandible. These ages are also consistent with the faunal and microfaunal assemblages and almost double the previous age estimates for the lower part of the deposits. The north African site of Jebel Irhoud contains one of the earliest directly dated Middle Stone Age assemblages, and its associated human remains are the oldest reported for H. sapiens. The emergence of our species and of the Middle Stone Age appear to be close in time, and these data suggest a larger scale, potentially pan-African, origin for both.

More like this
Science
Jan. 13, 2023
Ancient Siberian DNA upends our understanding of Native American migration
By Miriam Fauzia
Science
Jan. 24, 2023
Look: With a mouth full of teeth, this Pterosaur ate like a whale
By Jennifer Walter
Science
Jan. 12, 2023
Soyuz rescue plan and more: Understand the world through 8 images
By Robin Bea
LEARN SOMETHING NEW EVERY DAY.
Related Tags
Share: