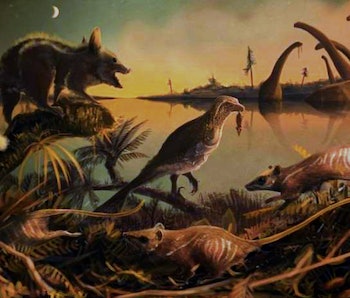 Two fossilized teeth of the shared ancestor of blue whales, pygmy shrews, and humans were recently discovered in the rocky cliffs of England’s Jurassic Coast. On Tuesday, the University of Portsmouth team behind the discovery announced that the teeth might be the oldest remains of human ancestors ever found.

The mammals that these teeth belonged to 145 million years ago, however, looked distinctly not human. It seems we are descended from two rat-like animals that were placental mammals, a group that today includes 4,000 species that all give birth to live young.

In the paper published Tuesday in Acta Palaeontologica Polonica, the paleontologists behind the discovery argue that their mammal fossils are the oldest, without dispute. That title previously went to a mammal specimen found in China dated at 160 million years old, but doubt has recently been cast on its validity. Analysis of the newly found teeth, dug up within the Dorsett cliffs, dates the fossils to the Early Cretaceous period, which occurred some 146 to 100 million years ago.

“The teeth are of a type so highly evolved that I realized straight away I was looking at Early Cretaceous mammals that more closely resembled those that lived during the latest Cretacious — some 60 million years later in geological history,” co-author Steve Sweetman, Ph.D., said in a statement.

He recalls that when he was asked to first examine them that “even at first glance my jaw dropped!”

It’s clear from the the teeth that they could pierce and cut food, and the degree to which they’re worn down demonstrates that they lived a decently long life for their species — a fact that Sweetman describes as “no mean feat when you’re sharing your habitat with predatory dinosaurs.”

It is also likely that these creatures with nocturnal, which fits in with what scientists know of mammals that lived alongside dinosaurs: In a paper published Monday in Nature Ecology & Evolution, scientists claim that mammals were nocturnal until the demise of non-avian dinosaurs.

While some scientists continue to debate whether or not these are really the oldest placental mammals found, the discovery nevertheless adds another piece to the puzzle of our own origins as humans. The finding is also distinctly British, from its location of origin to its name: One of the species is known as Durlstotherium newmani, named after Charlie Newman, a pub owner who works near the site where the teeth were found.