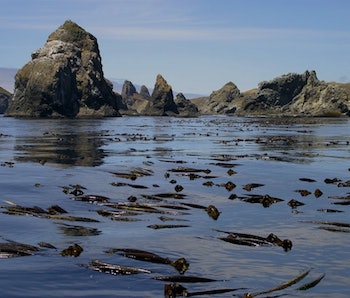 Until the early 2000s, the widely accepted explanation for how humans came to the Americas was the “Clovis-first theory.” The idea was that 13,500 years ago, the space between what’s now Russia and Alaska could be traveled via the Beringia land bridge, and a group of humans known as the Clovis used it to cross from Asia to North America. From there, they supposedly followed a narrow, mostly ice-free path down the middle of the continent to the plains of central North America, settled, and became the “first” Americans.

Today, archeological evidence of humans arriving much earlier than the Clovis has widely discredited the theory, but how those even-earlier humans arrived in and dispersed through the Americas is still up for debate. In a new paper in Science, a group of anthropologists make the case that the first migration wasn’t land based but rather traveled via the “kelp highway.”

The kelp highway hypothesis is the “antithesis of the old ‘ice-free corridor’ route,’ says University of Oregon anthropologist and co-author Jon Erlandson, Ph.D. in an e-mail to Inverse.

In the Perspective, Erlandson and his colleagues argue that early Americans followed Pacific Rim shorelines from northern Asia to Beringia to the Americas, then continued to migrate through the Americas along the coasts — not through the ice-free corridor that the Clovis-first theory suggests. This theory is supported by the idea that, around 17,000 years ago, the outer coast of the Pacific Northwest had deglaciated, creating “a possible dispersal corridor rich in aquatic and terrestrial resources along the Pacific Coast, with productive kelp forest and estuarine ecosystems at sea level and no major geographic barriers.”

It’s thought that the lush kelp forests that grew along the coast supported potential food sources like “sea otters and other marine mammals, abalones, urchins, and other shellfish; numerous fish and seabirds; seaweeds and more,” according to a University of Oregon report, and thus would have made survival on the water easier for early seafarers, as long as they stuck to the coasts.

That’s a very different picture than the one posited by the Clovis-first theory, which says that the early humans traveled by land, over the Beringia bridge, and followed the corridor inland before eventually moving to the coasts. That path of migration would have looked like this:

Co-author and San Diego State University archeologist Todd Braje, Ph.D., tells Inverse in an e-mail that the new estimates of when humans came to the Americas — which put the first migration sometime between 20,000 and 15,000 years ago — raise the possibility that the terrestrial, ice-free corridor route of Beringia wasn’t even fully passable at the time of the first migrations. What most likely happened was that first people crossed over via a coastal migration in which people traversed the coasts in boats, rather than traveling across the land bridge or voyaging across the open ocean.

Erlandson says that the primary goals of this paper were to highlight the Pacific Rim route, cast some doubt on recent claims for human occupation of the Americas well before the “last glacial maximum” — the last time the Earth’s ice sheets extended their full length — and stress the need to explore the continental shelves, where remnants of the first Americans are now submerged. He considers these regions “one of the last frontiers for archeology” because rising seas have covered many of these potential sites, making it difficult to put together a roadmap of early human migration.

If we really want to understand how humans got to America, Braje adds that archaeologists need to examine shorelines that haven’t changed dramatically in the last 20,000 years as well as look under the ocean. In 2016, archeologists announced they found evidence of pre-Clovis people by doing just that, discovering human and mastodon remains in a sinkhole 30 feet under the Aucilla River. Earlier this year, an unrelated group of archeologists found what are thought to be the earliest human remains found in the Americas in an underwater cave in Mexico, further supporting the idea that, if we want to understand how humans got here, we need to stick close to the water.

“Thirty years ago, we thought we had all the answers,” says Braje. “Now, there are more questions than answers.”

More like this
Science
Sep. 15, 2022
This tiny reptile roamed with the dinosaurs — and could solve an evolutionary mystery
By Jennifer Walter
Science
Sep. 24, 2022
Is a fact always true? A philosopher explains how to spot the difference
By Peter Vickers and The Conversation
Science
Sep. 23, 2022
Ancient DNA reveals the shocking scale of Anglo-Saxon migration
By Jennifer Walter
Related Tags
Share: