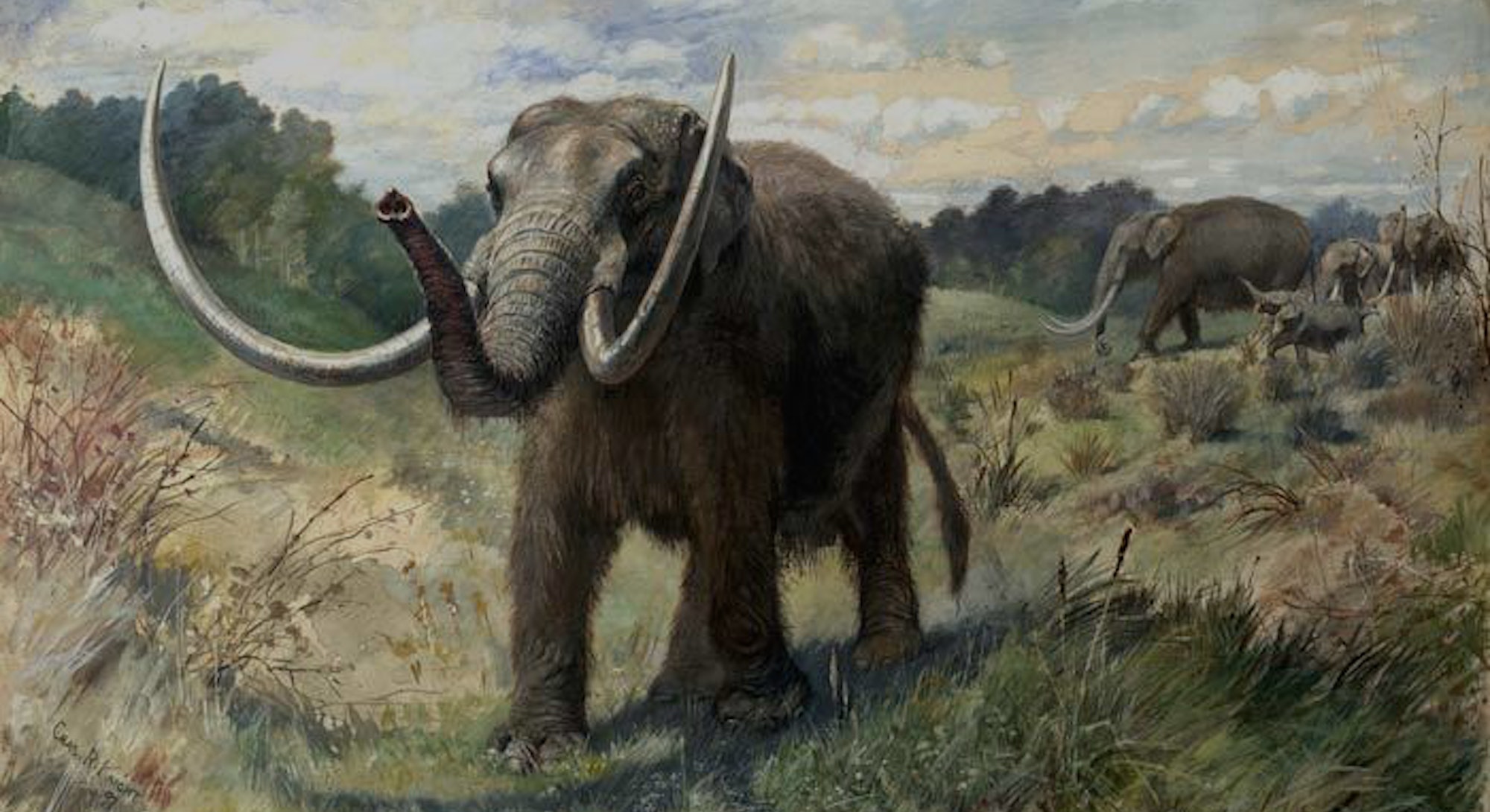 Long, long ago in a place that we now call Florida, a group of hunter-gatherers came to a small pond, where they either killed a mastodon or found one dead. Using tools made of stone, they sawed through the beast’s massive tusk, possibly to harvest the nutritious fleshy pulp inside its cavity, possibly to save the ivory for future tool-making. The humans might have even been accompanied by a pet dog.

This version of history is detailed in a new study, published Friday in Science Advances. The research plants a nail firmly in the coffin of the idea that the Clovis people were the first to colonize North America, arriving by land bridge from Asia about 13,000 years ago. When the Clovis people came, they joined others who came earlier by some other means — perhaps by boat, colonizing far reaches of the Americas. In fact, a society of pre-Clovis humans was munching mastodon in Florida about 1,500 years before Clovis people could have gotten there.

“In 1981, you were a complete quack if you thought there was pre-Clovis sites in the Americas — you were clearly presenting flawed data in some way, shape or form,” underwater archeologist Jessi Halligan, one of two lead authors of the study, told reporters Thursday. “And I think over the ensuing 25, 30 years, that has started to slowly change to where it’s become a viable research question again to test whether or not sites are older than Clovis.”

This dig site, located in a sink hole 30 feet under the surface of the Aucilla River, is not the first evidence of pre-Clovis people in the Americas — there are other sites in Texas, Oregon, Washington, Pennsylvania, Wisconsin, and parts of South America. But because the sites are so rare and scattered, some anthropologists have held onto the idea that those who came over the land bridge were the first settlers. This new research, because it is so carefully and thoroughly documented, could change the minds of the holdouts.

“In the archaeological community, there’s still a terrific amount of resistance to the idea that people were here before Clovis,” said Michael Waters, professor of anthropology at Texas A&M and the second lead author, in the teleconference. “And I think that the beauty of the Page-Ladson site [in Florida] is that it provides everything that people would want to see — excellent stratigraphy, excellent dating, clear artifacts — in a solid geological context.”

An archeological dig under a river looks a lot like one on land — with stakes in the ground and ropes marking quadrants, as the scientists peel back the layers of earth one by one. But it’s also different — the divers wear SCUBA gear and breathe through a tube connected to the surface. The Aucilla River is normally inky with sediment, and at 30 feet it’s “as dark as the inside of a cow,” says Halligan. Lights shine on the dig site, but everywhere else is just black. But there are advantages to digging underwater, too: It’s very close to a zero-gravity sort of environment. So instead of kneeling down and being very tired at the end of your dive you can dig upside down, you can dig sideways, you can hang out however it’s comfortable to get in there and get the best view of your dirt, she says.

This particular site had been excavated before, in the 1980s and 1990s, leading to the publication of the nearly 600-page tome, First Floridians and Last Mastodons. It was that earlier excavation that dug up the mastodon tusk with apparent knife marks. It also found a jaw bone and tooth of what might have been a dog, though this finding remains unconfirmed by the new research.

But given the lingering doubts of the wider archaeological community, Halligan, Waters, and team decided to give it another go and prove beyond a reasonable doubt that this site was visited by humans long before the Clovis people could have been there.

“These excavations were successful beyond our dreams,” said Halligan. “In 2013 we found a stone knife in a layer that was a mixture of sand and mastodon dung that had been deposited on the edge of a small pond. This pond would’ve been a small area in the middle of a much larger sinkhole, most of which would’ve been dry land so that people and the mastodons would’ve had to climb into the sink to access the water in the bottom. The elephant dung consisted of millions of fragments of chewed plant matter that was perfectly preserved which allowed us to collect more than 70 radiocarbon samples from the site. All of the samples from this layer dated to more than 14,400 years ago and samples associated with the knife dated to 14,550 years old. All of the samples from the layer just above this one, which completely sealed our artifact layer, were also more than 14,000 years old.”

These pre-clovis sites are rare not because they don’t exist but because they’re hard to find, said Waters. Population was likely sparse at the time, and many sites could now be submerged, as this one is. Particularly if they were coastal people — the sea level near the end of the most recent ice age was more than 100 meters lower than it is today.

As for Halligan, one of maybe ten specialists in underwater excavations on the continent, she’s going to keep looking. She plans to map out the Aucilla basin to find out where there are sediments of a similar age, and where there are artifacts left behind by these humans. She wants to answer the bigger questions about who these people were and how they lived. “It’s great that we have a handful of stone tools and we have a tusk but I would also like to see if we can find sites with more information, more features that tell us how people were settling, how they were living, what other people in the group were doing, how big groups are.”