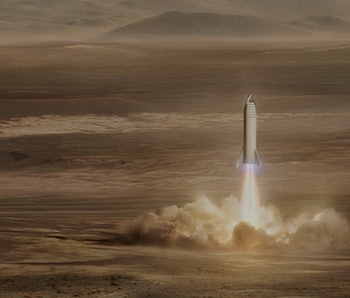 What’s good, Inverse Daily fam? While I’m here counting down the days until Season 3 of The Crown airs (just 97 days!), let’s get you caught up on today’s news.

“We are all hoping that we’re not alone, that’s why we’re looking.”

— Bill Diamond, president and CEO of the SETI Institute, on why the search for extraterrestrial life is continuing in earnest.

Here at Inverse, we’re obviously big supporters of scientific pursuits. But sometimes it’s hard to decide which projects should be pursued. In Hawaii, there’s a big debate going on about whether to build the $1.4 billion Thirty Meter Telescope (TMT) on the 14,000-foot-tall mountain known as Mauna Kea. Its geographical conditions allow for some of the clearest views of the night sky on Earth, but there’s one big problem: Mauna Kea is a sacred place of worship for native Hawaiians.

Locals and their supporters have banded together in protest, blocking researchers from their work at the 13 other telescopes that already dot the mountain. Astronomers have spoken out about the weeks of opportunities they have already missed because of the protests, but even Hawaii’s governor has gotten involved, vowing to find a peaceful solution. Peter Hess reports that one already exists: The group behind the TMT could build it on the Canary Islands, off the coast of northwestern Africa, instead.

Find out what it’ll take for this solution to get off the ground.

In all our discussions about future cities on Mars — what houses will look like (caves), how we’ll get there (in groups of 100 on the Starship), and how we’ll feel once we’re there (lonely, ridden with cabin fever) — it’s much more fun to avoid the elephant in the room: How much is it going to cost? Elon Musk, who’s betting we can establish a city there by 2050, has taken it upon himself to be the party pooper.

As Mike Brown reports, Musk estimates the bill will reach between $100 billion and $10 trillion to start. That price would outrank the Interstate Highway system as possibly the most expensive project in history, and it would beat the gross domestic product of most countries. Transport will be the most costly part: He estimates it could cost about $100,000 to send a ton of cargo. And to build a city, we’ll need a lot of it.

Discover what all that money will go toward.

The horrific back-to-back mass shootings earlier this month have only intensified the debate over gun control in America. While it may seem like the people calling for gun control are locked into opposition with those trying to protect gun rights, there’s at least one scholar who believes that there’s a solution that could both decrease gun-related homicides while protecting the gun rights of most gun owners. That person is Dr. Michael Siegel, the lead researcher on a pair of new papers identifying the gun laws that actually work across 48 states — the first comprehensive studies of their kind.

Siegel’s work shows that the most effective gun laws are the ones restricting who can have a gun, not those specifying how many or what type a person can have. In a conversation with science fellow Ali Pattillo, he pointed out the irony in the National Rifle Association’s plan to create a national mental health registry to identify and remove guns from “unfit” gun owners. Doing so would actually be the most extreme threat to gun rights, he says, noting that “The options that are effective for preventing gun violence are the exact options that best protect gun rights.”

Learn what the most effective gun control laws actually are.

Looking for all the news in half the time? Our friends at Cheddar’s Need2Know podcast give you all the news that matters with a little biting wit. The best part? You’ll be done in 10 minutes or less.

Most solar arrays involve a huge swath of land tiled with glassy obsidian panels, their faces upturned to the sun. The part we see tells an exciting story of renewable energy, but beneath the panels hides a tale of wasted space. Rather than lying flat on the ground, photovoltaic panels are elevated so their surfaces can be angled toward the sun. Between the ground and the panels is prime real estate that researchers now are trying to optimize.

Enter the field of agrophotovoltaics, a jumble of consonants representing a growing field dedicated to the mashup of farming and solar power. Essentially, agrophotovoltaics researchers want to grow produce underneath solar panels, and they’re finding that it can be a really good way to improve land use efficiency. Just check out India’s Cochin International Airport, the first to be fully solar powered, which used the space beneath its panels as farmland to produce 60 tons of vegetables in 2018 alone. As Mike Brown reports, setting up solar panels on less than 1 percent of cropland could power the world.

Read up on the best conditions for growing crops in the solar panels’ shade.

Last week, we talked about ALMA’s unparalleled ability to peer deep into space and time. For those in need of a refresher, ALMA is the Atacama Large Millimeter/submillimeter Array, an army of radio telescopes lined up on top of a tall plateau in Chile, where its great view of the night sky allows it to detect light that’s been traveling for millions of light-years. Because light that’s traveled such long distances gets stretched in a consistent way as the universe expands, the characteristics of the wavelength that reaches ALMA can tell us how long ago it was first emitted.

Hot off ALMA’s discovery of 39 ancient galaxies born in the first 2 billion years of the universe’s existence, researchers at the array have announced that they’ve caught a glimpse of a supermassive black hole, 100 million light-years from Earth, that has a mass that’s 2.25 billion times that of our own sun. ALMA discovered it by detecting changes in the light emitted from cold carbon monoxide gas swirling around the black hole’s gaping mouth.

Today, that’s German Environment Minister Svenja Schulze, who’s planning to roll out a ban on plastic bags as well as new policies regulating plastic packaging. According to the Environment Ministry, the country has already reduced its plastic bag use by 64 percent since 2015.

It was interesting to hear about the plant-based dishes you’d like to see next. Rick, embracing the trend, said: “Chicken cacciatore, or a nice flavored German favorite of sauerbraten.” Margaret M. would rather pass, saying she likes her “veggie ‘burgers’ made from sweet potatoes and rice” as is. Shaun H. prefers to keep it completely natural: “I want plant-based plants and that’s it. If we have to re-engineer food to eat it, perhaps we shouldn’t be eating it.”

So I’ve heard, but what’s that gotta do with this black hole and me?

More like this
Science
6.28.2022 7:00 PM
Cosmic rays could erase evidence of past life on Mars
By Kiona Smith
Science
6.30.2022 10:00 AM
Behold! Curiosity discovers Martian rocks contain an essential ingredient of life
By Allison Parshall
Science
6.27.2022 8:45 PM
NASA found the crash site of the rocket booster that hit the Moon in March
By Kiona Smith
Related Tags
Share: