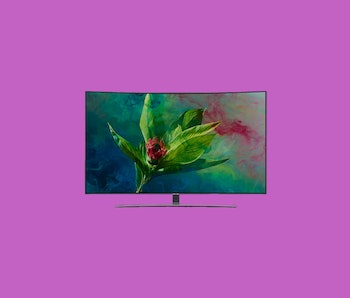 Prime Day is almost here, and with it, a chance to level-up your home entertainment system. Whether it’s a new streaming stick, a high-end television, or a quantum dot screen, Amazon has a number of offers for interested buyers so you can re-binge Thrones in style.

Amazon has given buyers a taste of what to expect on their website. It could be an ideal chance to make a truly incredible home theater setup, one that captures all the teeth of a T-Rex in Jurassic Park and brings sci-fi realms like Blade Runner 2049 to life. Here are some of the best deals to spec out the dream home entertainment setup:

To get a home entertainment setup started, you need a killer source. The Amazon Fire TV Stick 4K could be your best bet. The stick is normally priced at $49.99, but Amazon is slashing the price in half to $24.99 for Prime Day.

Amazon’s stick packs a ton of features into a tiny, practically invisible package. It offers the Alexa voice remote, where pressing the microphone button enables the user to ask for any movie, TV show or other content.

The stick is 80 percent faster than its non-4K predecessor, meaning it’s a solid purchase for anyone. Its 1.7GHz quad-core processor pumps out 4K resolution video up to 60 frames per second, and includes support for Dolby Atmos. Its 802.11ac Wi-Fi uses MIMO technology to hold a strong connection, and its 8GB storage is plenty of space for apps.

Amazon’s Fire TV Stick 4K offers support for a range of streaming service apps, as well as running local content through the likes of Plex and VLC. It also offers a selection of games. While it’s nothing to rival the likes of PS4 or Xbox One, its fast wakeup time and speedy access to content makes it more convenient for quickly sticking some Netflix on.

Of course, an HDMI source is nothing without a screen to play it through. Amazon is offering up to 50 percent off selected Sony LED smart TVs, which can result in some of the best television deals and offers to get your home entertainment system started off right. Sony’s TVs offer impressive features even on the lower-end, with many including support for high-dynamic range, built-in Wi-Fi and a broad selection of colors.

It’s a good idea, as with any other TV, to search for independent reviews before buying. However, it’s important to note that “Amazon Preferred” reviews mean little, and verified reviews are susceptible to manipulation. Read reviews from a variety of sources before making a decision.

Sony’s televisions are mostly well-regarded. The X950G was described by RTings as “an impressive 4K TV with great picture quality,” which “can get very bright and delivers great HDR performance full of bright, vivid highlights.” The publication praised its great motion handling, ideal for gaming, while noting the image loses accuracy at some angles.

If you’re looking for an alternative, Samsung’s QLED technology could offer big picture quality at low prices. Amazon will be selling the 65-inch QLED TV with big savings, although it’s unclear at this stage what sort of pricing the store will use.

QLED is not to be confused with OLED, the display technology that can switch off individual pixels to produce deepest blacks. QLED stands for quantum dot light-emitting diode, which Samsung explains uses a quantum dot layer that lights up when light hits the layer. This reflects colors to produce what Samsung claims are a more vibrant picture. At its heart, though, it’s a regular LED-based technology like other manufacturers.

The Samsung Q90 series in particular scores very highly in reviews. WhatHiFi gave it five stars and praised its natural, authentic colors, deep blacks and wide viewing angles. Downsides were on motion processing, describing it as “not perfect.” The publication concluded that “not only is it the best backlit set we’ve ever tested, it also plays its OLED rivals at their own game.” That position was backed up by Trusted Reviews, who described it as a “stellar TV that sets a mighty high bar,” but also noted that motion could be handled better.

With TVs sometimes costing four figures and streaming sticks adding needless extra money, Prime Day could be the ideal time to make an upgrade. If you’re looking at making a switch, you could do worse than going all-in with a big bargain.