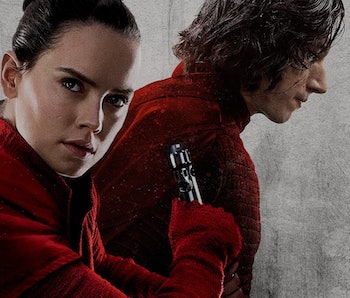 Everyone knows that Rey’s parents are filthy junk traders who sold her into a life of servitude for drinking money, but what some Episode IX theories presuppose is…maybe they’re not? Last week, MTV asked Last Jedi director Rian Johnson if he would be okay with Abrams “retconning the lineage of Rey’s parents,” and Johnson basically said he was fine with whatever. It was a loaded — and controversial — question, but it was somewhat telling that Johnson had an answer ready to go. For some fans and pundits, the fact that Johnson has a chill opinion about Rey’s family is enough of a reason to think some kind of retcon will definitely happen in Star Wars: Episode IX. Which, brings up the larger question: Should we care?

Part of the reason why the debate about Rey’s parents still rages is connected to direct quotes spoken out loud by the people who are involved with these movies. In late 2018, longtime Abrams collaborator Simon Pegg said:

“ I know what J.J. kind of intended or at least was being chucked around. I think that’s kind of been undone slightly by the last one [The Last Jedi]. There was some talk of a relevant lineage for her.”

And then there’s this recent interview with J.J. Abrams in Fast Company where he appears straight-up frustrated by the lack of advanced planning happening on the new Star Wars films.

“ While there are some threads of larger ideas and some big picture things that had been conceived decades ago and a lot of ideas that Lawrence Kasdan and I had when we were doing Episode VII, the lack of absolute inevitability, the lack of a complete structure for this thing, given the way it was being run was an enormous challenge.”

In the rest of the interview, Abrams clearly loves what he does and is thrilled to have been able to close-up the Skywalker Saga for Lucasfilm. But, that doesn’t mean he didn’t view it as a hard job. Essentially, with this one quote, Abrams admits that Lucasfilm hasn’t ever really had a plan for this “Skywalker Saga” everyone is talking about lately.

To be fair, this sort of make-it-up-as-you-go mentality isn’t new to Star Wars. Almost nothing in A New Hope implies Darth Vader is Luke’s father, a decision which does seem to be retroactive for The Empire Strikes Back, simply because early versions of Leigh Brackett’s screenplay feature a ghost of Luke’s father, who is, well, not Darth Vader. Furthermore, even Mark Hamill doesn’t believe Leia was always intended to be Luke’s sister in Return of the Jedi, meaning the idea that everyone is one big family in the classic trilogy is probably the result of at least two retcons.

We will probably never know exactly what J.J. Abrams and Lawrence Kasdan had in mind for Rey’s background in The Force Awakens, but the film itself certainly suggests she had a strong connection to familiar Star Wars-y elements. She has a little doll that looks like an X-Wing pilot, and she even wears an old school Rebel fighter pilot helmet while she eats her gross lunch. When Maz Kanata asks Han Solo “who’s the girl?” the camera cuts away, implying that Han has an answer to this question. Does any of this count as “evidence” Kylo Ren is lying and Rey is really his cousin? Not at all. But taken with the stuff people have actually said, there’s no way Rey’s “filthy junk trader” parents were what Abrams had in mind.

None of these facts mean that Rian Johnson wasn’t smart to flip the script on the assumptions that Rey had to be related to someone we’ve already met in Star Wars. He was.

But if we’re being intellectually honest, nearly nothing in The Force Awakens foreshadows the idea that Rey’s backstory was what Kylo Ren says it is in The Last Jedi. This brings us full circle to the larger question: has Abrams retconned Rey’s parents because it was just too hard for him to write Episode IX otherwise? And, if that does end up being the case, are we all going to lose our shit?

If I was placing a bet, I’d say J.J. Abrams won’t retcon Rey’s parents, simply because what Johnson did was almost exactly like the original trilogy, but in reverse. Instead of an “I am your father” moment, The Last Jedi, gave us a “your father is a loser and no one even knows who he is.”

Essentially, Johnson walked away from a bunch of foreshadowing stuff, because it probably felt too neat and easy. Conversely, the original Star Wars trilogy films do very little to establish that Luke and Leia are siblings ahead of time, and even suggest a love triangle between Luke, Han and Leia. Flipping the script to make Leia Luke’s sister is pretty much exactly something Rian Johnson would do if he used the time travel from Looper to go back in time and write the script for Return of the Jedi.

In other words, if Abrams changes what Johnson did in The Last Jedi it will be a twist on something that was actually already un-twisted. Whereas The Last Jedi made Rey’s background simple, a retcon would make it complicated again. And with so many other complicated things happening in Episode IX, the last thing the movie needs is to look backward. Star Wars may be set a long time ago, but Rey and her story should be about the future, not the past.

The new trailer for Episode IX will likely drop at Star Wars Celebration on Friday, April 12. 2019.