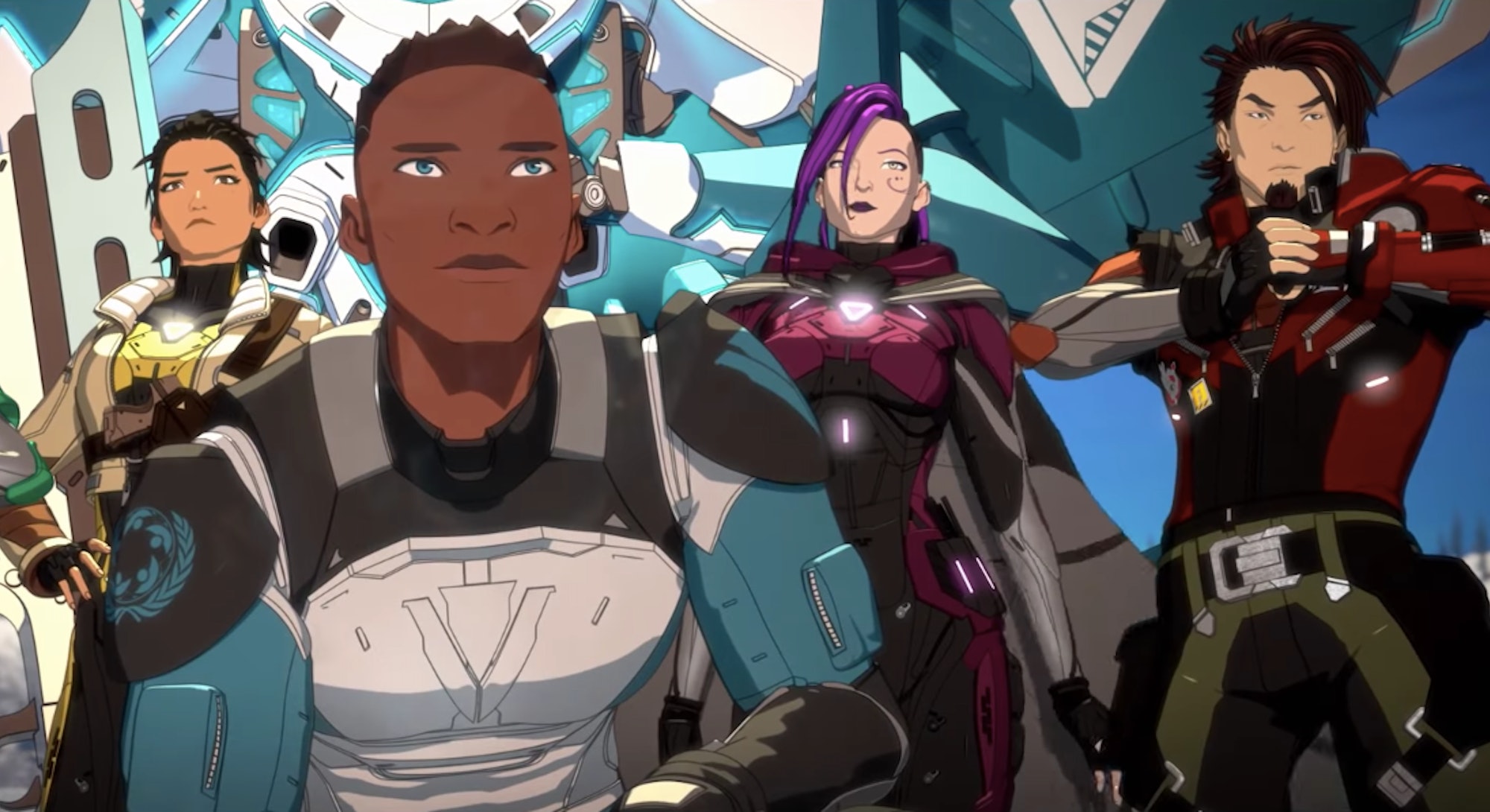 The futuristic worlds of science fiction are a lot closer to our reality than they seem. From holographic projections as a means of communication to neural interfaces that bridge the human brain to technology, sci-fi is sometimes more than just a speculative guess at humanity’s future. It’s an actual window.

In conversations with Inverse, a handful of experts from the fields of high-tech communications, brain-computer interfaces (BCI), and augmented and virtual realities break down the future as seen in the new series gen:LOCK, premiering January 29 on FIRST.

Created by Gray G. Haddock and Rooster Teeth (the studio behind Red vs. Blue and RWBY), gen:LOCK is a new mecha anime in the tradition of classic shows like Voltron, Gundam Wing, and Guillermo del Toro’s 2013 blockbuster Pacific Rim.

Set 50 years in the future amidst a devastating global conflict, a breakthrough technology dubbed “gen:LOCK” introduces an elite class of robots — all piloted by a crack team of specialists, led by Julian Chase (Michael B. Jordan) — that could finally end the war for good.

“Development of gen:LOCK provided a lucky excuse for me to go further down the rabbit holes I already enjoy,” says creator Gray G. Haddock, a self-described “addict” for futurology. “I probably crashed my web browser countless times with the hundred tabs I leave open, losing myself in article after white paper after study of all the technologies I’m interested in.”

He also encouraged his team of collaborators to “get lost in the cool headlines” about technology and breakthroughs happening “right now.”

In an earlier interview that took place at the 2018 New York Comic Con, Haddock says the background research for gen:LOCK “was pretty self-driven.”

“I find solace from political news by reading about advancements,” he said. “I wanted to take a shot at doing some speculative sci-fi that would feel familiar. It sounds like prompts for science fiction, but it turns out no, there are teams making incredible advancements in medicine, material sciences, networking communications, and brain-computer interfaces. Hopefully we’re respectful to the current trends in science enough so people won’t roll their eyes.”

After conversing with a few experts in the fields of brain-computer interfaces, artificial intelligence, and augmented reality who previewed the series, no one is rolling eyes.

To “Backup” a Human

One of the biggest driving ideas in gen:LOCK is a breakthrough in brain-computer interfaces, or BCIs, also known as brain-machine interface (BMI), mind-machine interface (MMI), or neural-control interface (NCI). It all means the same thing: a direct path between the human brain and a machine.

In the series, the gen:LOCK program recruits individuals who neurally link up to colossal, four-story-tall mechas. One of those individuals, in fact, is actually dead, and only returns to the living thanks to a “backup” of their mind. While the other pilots’ physical bodies lie prone in an enclosed bed, their consciousness are placed into the mechas, effectively giving the pilots a new body for a temporary time.

It’s a neat hook for an anime, but could it happen in the real world? Bruce Duncan, director of the Terasem Movement Foundation (TMF), and Josh Wolfe, co-founder of the firm Lux Capital, both say that the science checks out — minus the giant robots, of course.

For the past 13 years, Duncan and the TMF have led the ongoing Lifenaut experiment, which specializes in collecting “Mind Files” that aim to digitize a person into a synthetic facsimile. The project has already attracted 50,000 people, who volunteered to create a “digital archive” of themselves.

“In the next 50 years, maybe closer, we’re gonna see the continuation of artificial intelligence more integrated in our daily lives,” Duncan says. “I’m just one of many out there asking how we can use tools of the digital age to extend and enhance the quality of human lives.”

While Lifenaut isn’t exactly like gen:LOCK, it is the closest thing to transferring one’s consciousness into a machine.

“The goal is to explore whether we can gather enough salient information about you and transfer that information to a computer and using artificial intelligence to create a good enough equivalency to the original,” Duncan says, emphasizing the Vermont-based foundation’s goals with two rhetorical questions.

“Can we backup your mind to the computer and know that it’s you? And if that’s true, can we transfer that information into new forms like a robot or an avatar?”

A rough draft of Lifenaut’s goals already exists. Its name is Bina48 (Breakthrough Intelligence via Neural Architecture 48) and named after its human model, Bina Rothblatt. Described as “more of an illustration” than a proof of concept, Bina48 is a robot who can interact with humans based on information fed to her.

“She can speak, smile, her sense of humor came from early programmers,” he says. “She’s an ambassador. If I talk to you about the idea, it’s abstract, but if you talk to Bina48, that brings the idea of the project to life.”

There’s a ton of learning potential for the areas of artificial intelligence that Lifenaut is exploring. Duncan cites a separate, different project out of UC Berkeley that’s also collecting information from survivors of the Holocaust and turning it into data, in the hopes future generations can “interact” with survivors and learn about their experiences years from now.

“That’s only one idea,” Duncan says. “You can preserve for future generations a highly interactive capture of the essence, history, memories, beliefs of not just celebrities and movie stars, but everyday people who may have wisdom and insight that would help us resolve problems like poverty, violence, or environmental disintegration.”

“I don’t know 50 years, but the next 10,” Josh Wolfe posits, “In 10 years, you will be conducting the technology around you with simple, natural gestures that will seem to somebody of a prior generation that you are conjuring black magic.”

Wolfe, an investor whose firm Lux Capital specializes in funding emerging technologies inspired by science fiction, says the BCI seen in gen:LOCK is an almost perfect representation of how mind and machine can work as one in cases like remote piloting.

“The crazy and real thing about robotics is that you don’t need to be situated in the suit,” Wolfe says. Like in movies such as Ready Player One and Avatar, “you can be remote; you’re in a safe place so long as you have a connection to [the robot].”

One of Wolfe’s investments is CTRL-labs, founded by Thomas Reardon, Ph.D., which hopes to produce a mass market BCI product. If CTRL-labs’ ambitions are realized, users who wear a device (not unlike a typical smartwatch) can perform any simple task, from turning keys and typing on keyboards to playing Spotify, without lifting a finger.

“Just thinking of moving, it will do that thing,” says Wolfe. “It is not an implant in your brain. It reads the signals from your brain as transmitted through your muscles. Just by thinking about moving, you can map that to any device in your office or home.”

While some of the crucial mecha science in gen:LOCK remains to be revealed, both Duncan and Wolfe believe the show isn’t far off from technology being an extension of human personas.

“We have our physical identity, the ethereal identity which is digitized into avatars online, whether it’s your persona or set of consistent beliefs and ideas,” adds Wolfe. “I think it’s a really provocative premise, this bifurcation between identities and how it manifests in physical robots.”

“I think one of the things the show is reflecting is this individualization, this tailoring of technology to be an extension of ourselves,” Duncan says. “Just the way people have used jewelry and art, technology is next in line to merge with our creativity. If we base technology on the consciousness of a person, it makes sense to me we’ll see individualization. I wouldn’t be surprised to see more diversity in the expression of human consciousness if we do it ethically and in a morally responsible way.”

The Future of VR/AR Is “Just Starting to Exist”

One of the first scenes in gen:LOCK illustrates a distant future where augmented reality is a normal part of life, when Julian Chase “calls in” from an army base to join his family in Brooklyn for dinner. Other instances of VR and AR in the series include popular video games and interfaces that lets characters manipulate or upload data just by swiping and tapping the air.

These visuals should be familiar to sci-fi fans, but there are some serious technological hurdles in the way of making this technology a reality. Creating holographic projections without a source to reflect light goes against the laws of physics, but one company in Brooklyn aims to achieve the dreams of VR and AR without the “dystopian” nightmare of headsets.

Looking Glass Factory, a startup headquartered in Brooklyn with factories in Hong Kong, is led by co-founder and CEO Shawn Frayne. The company recently released its main product, the Looking Glass, that depicts holographic displays without any headsets.

“The key to the holograms at our company is that its groups of people can interact and see a 3D world without having to put something on their face,” says Frayne. He adds that movies have historically depicted holograms without light reflectors, which cannot be solved just by making more sophisticated tech.

“You can’t stop light in mid-air without having optics around it. Even in a thousand years that wouldn’t be possible,” he says. But headgear-less augmented reality, however, is now possible. “Most of the practical purposes and the emotional advantages [of VR and AR] that are depicted in movies, that technology is just starting to exist.”

Frayne doesn’t want to be a curmudgeon, though. After all, it is the impossible dreams of science fiction like gen:LOCK that become aspirations in reality.

“I think it’s great people depict stuff that isn’t necessarily possible,” he says, “because it pushes folks in our field to think beyond our current constraints.”

As much as series creator Gray G. Haddock loves that his passion for futurology is everywhere in gen:LOCK, he is steadfast that it’s only humanity that can push forward. Not technology.

“The headlines of today remind you of all the tendencies humanity has, not just positive ones,” he says. “There are smart people out there. I wanted to explore a story that reminded people that just because there might be amazing new technologies around the corner, we have to be mindful how we apply them. Much as technology is evolving, humanity needs to evolve and take responsibility for itself also.”