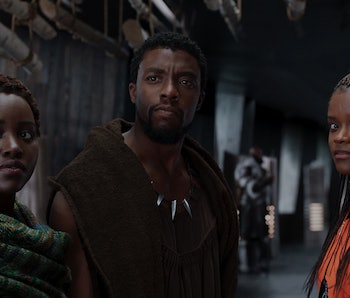 Summer might be ending soon, but Netflix’s dominance in terms of streaming great pieces of sci-fi is only continuing.

July saw a welcome influx of Jurassic Park dinosaur movies and other delights, August had the fantastic Her and Ex Machina, and September has one of the highest grossing movies of all time. And before Disney takes away Star Wars and Marvel movies, Netflix also has greats like Thor: Ragnarok and Star Wars: The Last Jedi. So there’s plenty of sci-fi for any type of audience here, be it young or more mature.

So the next time you’re hankering for a taste of tomorrow, here are the 11 best pieces of science fiction that Netflix has to offer right now, with a focus on the new, exciting, and original but more importantly, good recommendations.

11. The Hitchhiker’s Guide to the Galaxy

This 2005 movie is based on the very weird Douglas Adams novel from 1978 by the same name, in which a totally regular Earthling named Arthur Dent is saved from Earth’s imminent destruction by way of interstellar bureaucracy. Bonkers is a great word to describe the tone of this sci-fi universe, and it’s thoroughly infused with a kind of comedic sensibility that only dry British wit can bring. In some ways, Hitchhiker’s Guide feels like one very long episode of Doctor Who written and performed by the Monty Python crew.

Marvel’s Black Panther smashed through tons of box office records for totally legit reasons. King T’Challa of Wakanda was introduced to the world in Captain America: Civil War, but Black Panther follows the character in his own solo movie as he returns home to his fictional nation to sort out exactly what kind of king he wants to become. He fights a usurper cousin and winds up changing his nation — and the greater MCU — permanently.

A lonely girl’s life changes completely when she befriends a high-tech robot destined to save the world. Much like animated buddy-robot film Big Hero 6, Next Gen has colorful characters in a near future full of robots. Big hearts and big personalities abound in what might be Netflix’s cutest animated feature of 2018.

Rian Johnson’s Star Wars movie might be the most controversial ever in that it defies all your expectations while drawing the ire of many fanboys. Episode VIII picks up right where The Force Awakens left off, with Rey meeting Luke Skywalker and the remaining members of the Resistance on the run from the First Order.

If you had Luke-warm feelings about The Last Jedi on your first viewing, then it’s time to give it another show. Or, you know, just rewatch that badass fight scene in which Rey and Kylo Ren fight Snoke’s guards over and over again.

One of the best Marvel movies in recent memory is director Taika Waititi’s Thor: Ragnarok, which resembles something much closer to a fun-loving Guardians of the Galaxy movie on the cosmic scale than it does anything like the first two Thor movies. Waititi basically fixes Thor’s character in the MCU by infusing him with charm and a genuinely hilarious sense of humor. Along the way, he makes Thor’s world feel way more sci-fi than fantasy, which is great for the character.

Thor has to face an enemy more powerful than any he’s ever faced: his sister Hela, the goddess of death. The god of thunder loses his hammer, gets blasted half-way across the universe, and has to form his own small team of heroes to save his people. It’s just too bad that at least half of them wind up dying in Infinity War anyway.

One of The CW’s best non-Arrowverse programs, The 100 is a veritable YA dystopian drama with a hard sci-fi premise. Following the nuclear apocalypse, a portion of humanity took to a series of connected space stations to survive the radiation. Almost a century later, supplies are diminishing, and a group of 100 delinquent children is sent down to test survivability on Earth’s surface. What they find is a planet with treacherous terrain, a few horrific monsters, and — against all odds — savage, surviving humans. The A-plot on the ground of Season 1 feels like Lord of the Flies, whereas the B-plot on the space station feels remarkably like Battlestar Galactica. While The 100 stumbles a bit by Seasons 3 and 4, it remains a solid option for contemporary sci-fi.