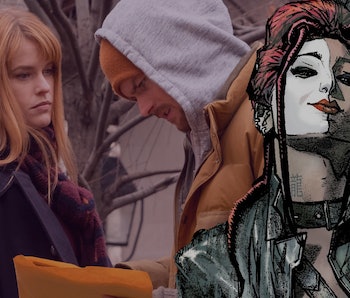 Iron Fist will have his hands full in the second season of his Netflix series. As Danny Rand returns in Season 2 of Marvel’s Iron Fist, he’ll have to square off against the villain known as “Typhoid Mary,” played by Alice Eve (Star Trek Into Darkness). But who is Typhoid Mary? And what does she want out of the “barefoot billionaire”?

Here’s a brief rundown on the Marvel mutant villain before her appearance on Iron Fist Season 2. And don’t worry, there are no spoilers for Iron Fist ahead.

Typhoid Mary, named after the 20th century Irish-American cook who carried the typhoid pathogen, was created by comic legends Ann Nocenti and John Romita, Jr. and first appeared as Daredevil villain in Daredevil #258 in 1988. She then became a prominent enough character to make various appearances throughout the ‘90s and ‘00s, showing up in comics like The Spectacular Spider-Man, Deadpool, and Marvel Comics Presents. She even had her own four-issue miniseries in 1996, Typhoid, written by Nocenti.

Classified as a mutant (as in, she could be an X-Man, if she tried) with dissociative identity disorder, or DID, Typhoid Mary has three distinct personalities: Mary Walker, her “real” identity, a timid pacifist; “Typhoid,” adventurous and violent; and “Bloody Mary,” a brutal sadist.

She is also an expert swordsman, so expect to see her blades smash against Danny Rand’s glowing fists in Iron Fist. In addition, she’s a powerful telekinetic and pyrokinetic, which makes her especially deadly to deal with.

In Avengers: The Initiative, Typhoid Mary donned the identity of “Mutant Zero” as part of a black ops team led by Henry Peter Gyrich, a government stooge is no friend to the superhero community. Since mutants don’t exist in the MCU, don’t expect this part of Typhoid Mary’s comic book history to come to life.

It’s unknown what Typhoid Mary’s role will be in Iron Fist, especially since she’s most famously a Daredevil villain and has rarely, if ever, fought Danny Rand. Still, Danny is fulfilling the empty void Matt Murdock has left in his “death” in The Defenders. For a loose cannon like Typhoid Mary, that’s good enough.