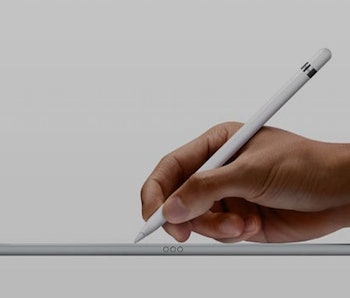 Apple Pencils have long been limited to gliding over the screen of iPads. Artists, designers, and casual doodlers use the device to transform their tablet into a digital canvas, a virtual notebook, or electronic sketch pad. But as the much-anticipated iPhone keynote draws closer, a series of rumors have continued to hint that Apple’s upcoming handsets might support the stylus.

The latest is courtesy of the Taiwanese blog Economic Daily News, which says the expected 5.8 and 6.5-inch OLED smartphones will ship with Apple Pencil capabilities. The publication cites “industry insiders” and excludes the cheaper, 6.1-inch LCD handset from its predictions, suggesting that this feature will only be available on this year’s higher-end iPhones.

This most recent claim bolsters three previous reports asserting that 2018 will be the year that the Apple Pencil and iPhone join forces. Most recently, TrendForce analysts penned a note stating this would be the case. The notable Apple analyst Ming-Chi Kuo also echoed this prediction, and a recently unearthed patent filing gave us a blueprint of how this partnership might look like.

Even the sixth iOS 12 public beta seems to be warming up for the Apple Pencil. The iPhone’s Markup tool now lets users select the opacity and size of its virtual utensils, making it perfect for the design capabilities that the stylus is suited for.

Since its November 2015 launch, the Apple Pencil has only been compatible with the iPad Pros and sixth generation iPads, but if all the chatter proves true we could see the beginning of a new way to interact with Apple’s flagship mobile device.