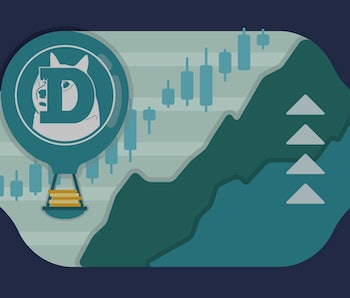 Dogecoin — the pupper-inspired altcoin — has gone from the realm of cryptocurrency parody to pantheon after becoming the fifth token offered as a tradable asset on the popular investment app, Robinhood. It has since been coasting at prices it hasn’t reached since early June. But as the founder of this meme-able crypto tells Inverse that could actually spell trouble for crypto prices across the board.

Jackson Palmer, the Australian entrepreneur responsible for creating Dogecoin in 2013, recalls that the altcoin surged ahead of two bitcoin crashes. One followed Dogecoin’s initial release in on December 15, 2013, and another one occurred when Palmer’s crypto creation surpassed a $2 billion market cap in January.

“Ultimately, I think aside from being a fun community of decentralized meme lovers, Dogecoin is a useful barometer of how crazy the cryptocurrency bubble is at any given point in time,” he explains. “It’s usually the final thing to spike in popularity and signal that we’re nearing a top in terms of hype and elation before the market usually crashes.”

As of 4 p.m. eastern, Easter Dogecoin is valued at $0.003511 and bitcoin is priced at $8,229.36, according to CoinMarketCap. Both cryptocurrencies are riding their own respective surges. Dogecoin was boosted due to Robinhood’s move, while bitcoin’s jump could have a lot to do with the fact that it is being increasingly accepted by the financial establishment.

Of course, just because Dogecoin is having a bit of a moment is no reason to assume it’s time for doom and gloom. But there are some other signs of bubbliness.

Previous bubble pops, for example, have also been preceded by other signals, like the wave of non-blockchain firms that started arbitrarily inserting “blockchain” in their name and mission statements. As Bloomberg recently reported, these stocks have also seen a recent resurgence. A similar trend occurred leading up to the massive cryptocurrency crash in early January.

It remains unclear whether or not this bump in Dogecoin will signal the end of bitcoin’s current hot streak. The digital currency market is constantly changing and while looking to the past can offer insight, bitcoin’s previous crash occurred under entirely circumstances.

Currently, bitcoin scaling efforts have been fairly successful and as financial institutions warm up to it as well we could be entering a new era of cryptocurrencies.

More like this
Gaming
7.4.2022 4:00 PM
GTA 6's most controversial rumor probably won't happen — here's why
By Robin Bea
Innovation
23 hours ago
A single color is reason enough to buy a Jaguar XF
By Jordan Golson
Innovation
7.2.2022 6:00 PM
Are self-driving cars safe? The tipping point rests on a psychological illusion
By Jean-François Bonnefon and The Reader
Related Tags
Share: