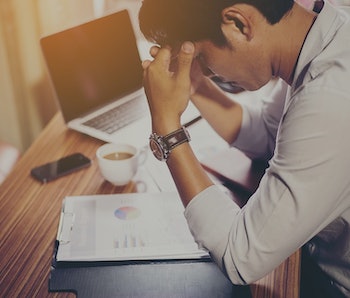 Astronauts use sweat to make drinking water, and biologists use it to understand how we stay cool. Sweat has already told us a lot about how humans function, but now a team of Stanford researchers are using it to find out what happens when humans are functioning badly. As they describe in a paper published Monday, their new wearable can track the elusive element in sweat that’s tightly linked to stress.

The device, designed by Onur Parlak, Ph.D., a post-doctoral researcher studying materials science and engineering, is a stick-on stretchy patch that measures the levels of cortisol — a hormone produced during stress — in sweat. Of all the compounds in sweat, including potassium and other electrolytes, cortisol is a uniquely special, tricky hormone that’s difficult to track on the surface of the skin. Unlike other elements of sweat, cortisol doesn’t have a positive or negative charge, and so it tends to go undetected by other sweat-sensing wearables, like headbands, which sense electrical charges given off by other molecules.

With the sheer number of people feeling stressed these days, it’s becoming increasingly important to find a way to track and manage stress. “The biggest initial challenge was to find a way to sense a neutral molecule (cortisol) with an electrochemical sensor designed to sense charged molecules/atoms,” explains Alberto Salleo, Ph.D., study co-author and Stanford materials science professor, to Inverse. “Onur came up with a sensing layer that blocks ions if cortisol is present.”

This “sensing layer” is a bit like a filter that is sensitive to electric charge. Electrically charged molecules will pass right through the filter, but molecules that have the non-charged cortisol molecules piggybacking along will remain behind. However, Parlak fears that this method could allow other molecules through and result some potential false positives.

While researchers have known about the importance of measuring cortisol levels for years, it’s actually really hard to measure them outside of the lab. Most labs do so accurately, using blood or urine samples, but those tests are typically used to measureacute spikes of cortisol. The team’s stick-on tracker method, Parlak says, allows people to to monitor cortisol levels in real-time.

“Cortisol hormone can be measured by testing blood, saliva or hair but none provide quick results, so are not particularly useful for detecting short-term stressors for quick action,” Parlak tells Inverse. “Sweat provides a non-invasive and quick testing opportunity.”

With this in mind, the team at Stanford will continue to tweak their sweat sensor, looking for ways it can potentially track other molecules. While Fitbit probably won’t attach a sweat patch any day soon, the popularity of fitness and health tracks is illustrative of a larger trend in which people want to know whats happening inside their bodies. A stress-sensing sticker, potentially, is another way in.

More like this
Mind and Body
Jan. 22, 2023
Cyclic breathing: Why experts say just 5 minutes a day can reduce stress
By Sarah Sloat
Mind and Body
Jan. 31, 2023
Why Is My Skin Worse in Winter? 5 Conditions Dermatologists Watch out For
By The Conversation, Jeffrey Chen and Sonal Choudhary
Science
Feb. 4, 2023
How Scientists Decide Whether Everyday Products Could Cause Cancer
By The Conversation and Brad Reisfeld
LEARN SOMETHING NEW EVERY DAY.
Related Tags
Share: