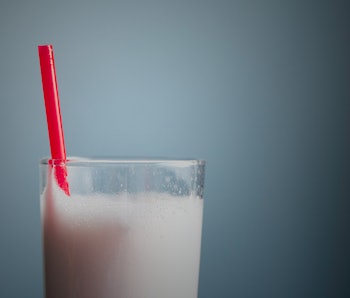 The CDC’s recent National Youth Risk Behavior Survey is a statistical goldmine when it comes to figuring out what the teens do. Not only does it track well-known risk factors for adolescents, like smoking or drunk driving; it also tracks the comings and goings of other health-related trends. Some of them are rather odd: In its report published Thursday, the CDC showed that milk-drinking has been on the decline for the past 18 years and its rate of decline is only speeding up. Teens: They just don’t like milk!

Given this, it follows that the amount of teens who did not drink any milk at should have increased — and the CDC reported that it had: roughly ten percent.

But an important thing to note about the Youth Risk Behavior Survey is that causality is not in their wheelhouse. It is 120 pages of pure descriptive statistics, nothing more. So, the report doesn’t go on to hypothesize as to why the teens have abandoned milk-drinking. It is also important to know that not every state includes every question. Some states for example, have decided not to include questions regarding sexual identity.

So for the milk question, which has been asked on every survey since 1999, we are missing results from 11 states: Alaska, Colorado, Connecticut, Delaware, Maryland, New Hampshire, North Carolina, Rhode Island, Vermont, Virginia, and Wisconsin.

But for the data that we do have, the CDC was able to break down the decline of milk drinking and determine the rate of change. They found that in the past four years (2013-2017), the rate of students who do not report any milk drinking had increased compared to earlier time periods: