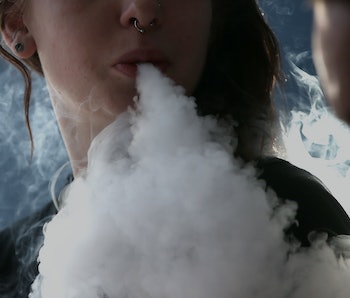 Teens love to vape: In the last month, one out of four high school students has taken a drag off an e-cigarette and luxuriously exhaled cool-looking clouds of smoke, according to the latest CDC survey.

“It’s troubling to see that students are engaging in new risk behaviors, such as using e-cigarettes, said CDC Director Dr. Tom Frieden, who spoke on the findings in the National Youth Risk Behavior Survey, which has come out every year since 1991.

There’s a fair amount of debate over the coolness of vaping, and you could say that the slight edge goes to the argument that it’s the sort of uncool thing that tragically thinks it is cool. People who Love 2 Vape know this, of course. In the article, “Don’t Be a Vape Douche,” posted to vapersoul.com by an author named Mr. Cloud, the bad reputation that vapers have may very well come from teens: “Vaping veterans are blaming the rookies,” he writes. Who are these rookies? It might be high school students, given the disproportionate percentage of them who vape relative to the general population, which is something like 3.7 percent.

Yet, The Daily Dot attended a vaping conference (“VapeBlast”) last fall and came back surprised: “I went to a vape conference to mock it then the vapers changed my mind,” exclaimed Jené Gutierrez in her story. One of the more self-aware attendees told Guiterrez that vaper-victimhood was legit: “People are averse to vaping and vape culture due to misinformation, misrepresentation, and fear.” Sure, but here is, as Mic points out, a “Toxic Masculinity” surrounding vape culture. The story includes this prescient quote: “The non-vaping public sees vaping the same way they see fedoras,” vaping reporter and blogger Shawn Avery told Mic’s Jack Smith IV. “They associate it with this awful MRA [men’s rights activist], neckbeard culture.”

So why are teens vaping more? Probably for all of those dangerous reasons above. Nationwide, 44 percent of high school students have vaped, and that male-focused culture may have some data to back up those observations — 45.3 percent of male tenth-graders vaped compared to just 41.2 percent of female 10th-graders. Across demographics lines, Hispanic and white high schoolers vape nearly equally (26.3 percent and 25.2 percent respectively), while 18 percent of black students surveyed vape currently.

While vaping is bad and you can expect to see more warnings targeted at high school students — “We must continue to invest in programs that help reduce all forms of tobacco use, including e-cigarettes, among youth,” Frieden says. — cigarette and cigar smoking actually went down. In ‘91, 28 percent of high school students smoked tobacco, now that number is just 11 percent.

Besides vaping, the YRBS observed these trends:

Texting While Driving, Same as It Ever Was — 42 percent of students who had driven a car or other vehicle during the past 30 days reported texting or e-mailing while driving. Same as 2013.

Fighting Isn’t as Cool Anymore — In the past year, just 23 percent of students got in a fight. That’s down from 42 percent in 1991.

Schools Are Slightly Safer — Six percent of students didn’t go to school because of safety concerns last year. That’s down from seven percent in 2013.

Prescription Drug Use Goes Down — Last year, 17 percent of high school students took prescription drugs without a prescription, down slightly from 20 percent in 2009.

Sexual Activity Down Ever-so-Slightly — One in three high school students said they had sex within the past three months, down from 38 percent in 1991.