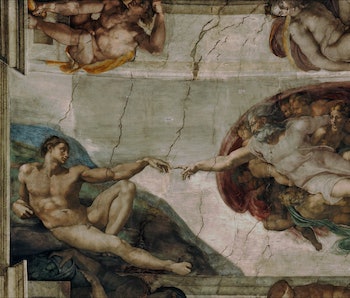 Sleeplessness is a growing problem worldwide that’s been blamed on various factors, such as poor sleep hygiene and excessive social media use. But one way to get a full night of sleep, report scientists in a paper published in the journal Sleep Health on Wednesday, is to let God get under your skin.

In the new analysis, researchers Christopher Ellison, Ph.D. of the University of Texas at San Antonio and Terence Hill, Ph.D. of the University of Arizona investigated data from seven self-reported population studies on the relationship between religion and sleep. They found that, across all nearly all studies, adults with religious convictions tended to get more hours of sleep.

Previous studies have suggested a link between religion and sleep, but Ellison and Hill attempted to find out how religion actually effects the body in order to give people better shut-eye. In the paper, they identify several processes by which religion might shape sleep quality, including its biological “buffer” effect on the body’s chemical stress response, known as “allostatic load.”

Allostatic load broadly refers to the physical wear and tear associated with chronic stress, which manifests in the body in the form of stress hormone imbalances, leading in turn to hastened cell aging and altered gene expression. A high allostatic load is, perhaps not surprisingly, linked to bad sleep; conversely, in 2015, a study in Sleep Medicine Clinics suggested that sleep can actually regulate allostatic load by resetting our levels of stress hormones. With this in mind, Ellison and Hill looked for ways that religion might reduce allostatic load, thereby increasing the length of sleep.

“We know very little about how religion can get ‘under the skin’ to support healthier physiological functioning,” the researchers write. “According to this research religious involvement (religious meaning systems) may help to buffer appraisals of stressful life conditions and, by extension, their physiological processes.”

The support networks offered by religious groups, the feeling of control, and even “moderate drinking practices” inherent in some aspects of religious life could be the key to understanding the link between religion, reduced stress, and better sleep. Additionally, religion can help provide meaning in desperate circumstances, which is a significant source of stress for anyone who’s ever experienced an existential crisis.

Not all is lost for people who are irreligious or atheist, of course. As this study suggests, religion represents a way to encourage people to adopt healthy, sleep-boosting behaviors rather a sleep hack in itself. There is some evidence that spirituality, as opposed to faith in any particular religion, can have positive effects on mental health, and a 2012 paper from the Proceedings of the National Academy of Sciences showed that even being in a position of leadership can also help decrease stress response.

So, if God turns out to be hard to find, becoming spiritual or the boss may serve as a good proxy.