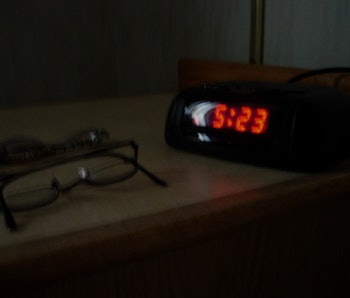 There’s now an existential question hanging over how well you sleep. Sleep researchers have found that when a person feels they have a purpose in life can they experience better sleep and more easily combat sleep disorders.

A research team at Northwestern Medicine and Rush University Medical Center surveyed 823 older adults — 60 to 100 years old — about their feelings on their purpose in life and their quality of sleep. Their findings were published in the journal Sleep Science and Practice on Monday.

How exactly do you quantify a person’s purpose in life? The survey involved answering questions like, ”I feel good when I think of what I’ve done in the past and what I hope to do in the future.”

“It’s all about having a directive and a focus to what you do in your life and to feeling that your life has meaning and purpose,” Dr. Arlener D. Turner, an author of the study, tells Inverse.

Since the team followed up with participants over several years, this is the first study to show that having a purpose in life can specifically result in fewer sleep disturbances and improved sleep quality and over a long period of time.

Although the study surveyed only older adults, since people of all ages suffer from sleep disorders and bad sleep, the results can in part be applied to a broader demographic.

Turner says the findings have clinical significance, too. “This could be another avenue for non-pharmacological treatment of sleep disorders. Purpose in life is something that can be enhanced and cultivated. So that can be another avenue, through for example, mindfulness-based treatment.”

For anyone whose unfamiliar with that term, mindfulness-based therapy is a well-known practice in psychotherapy that uses meditation to focus on becoming aware of thoughts and feelings, with an emphasis on accepting and not reacting in extreme ways. The idea is to move away from self-criticism and other negative thought patterns that can prompt a person to spiral into a self-destructive state. It’s a treatment that’s been used to combat insomnia, and not just by older people.

Purpose in life can affect your lifestyle too, Turner says. “What we’re seeing is that individuals who have higher levels of purpose in life also have healthier behaviors,” she says.

Turner explains that people with purpose in life tend to take better care of themselves; they go to the doctor more, they exercise more, and this can lead to decreasing their risk of sleep disorders. There’s a lot of biological factors that play a role in sleep disorders, and a healthy lifestyle can be a major help to curbing sleep issues.

According to Turner, the next step will be to study the effect of mindfulness-based therapies on enhancing purpose in life and in sleep quality.

Previous work has shown that purpose in life can be protective against numerous negative health outcomes including sleep disturbances. Given that sleep disturbances are common among older adults and African Americans, the aim of the present study was to examine the relationship between purpose in life, overall sleep quality, and the presence of sleep disorders in a community-based bi-racial sample of older adults.

These findings provide support for the hypothesis that a higher level of meaning and purpose in life among older adults is related to better sleep quality and appears to be protective against symptoms of sleep apnea and RLS.

More like this
Science
6.28.2022 4:52 PM
1.8 billion people face once-in-a-century flooding, study reveals
By Tara Yarlagadda
Science
6.28.2022 10:00 AM
How are drugs absorbed in the body? The science of medicine, explained
By Tom Anchordoquy and The Conversation
Science
6.26.2022 11:00 PM
The powerhouse of the cell has a more complicated origin than we thought
By Viviane Callier and Knowable Magazine
Related Tags
Share: