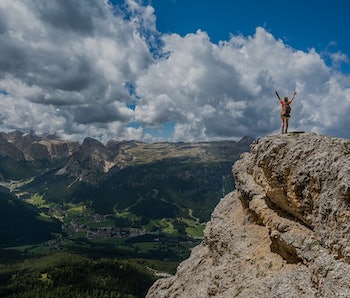 Researchers at Yale and Columbia are taking a closer look at what happens in your brain when you stand on top of a mountain, get in the zone, meditate, or have “two-way experience with a higher power.” Their results, published in the journal Cerebral Cortex, tracked down the neurological home of fully organic spiritual experience to its location in the brain.

People have had spiritual experiences for thousands of years — through religion, meditation, and sometimes psychotropic drugs. But the digital age has reshaped our relationship toward transcendence: Movements like transhumanism turn to technology to remedy the mental stress of being human.

There is, however, evidence that biological spirituality can be just as powerful a mollifier. A 2012 study published in The American Journal of Psychiatry followed 114 adults for ten years and showed that those with strong spiritual convictions had only one-fourth the risk for major depression compared to non-spiritual adults. Now, the researchers behind the study, published in May, are taking this research one step further by pinning down how the brain creates spiritual experiences, in hopes they can someday reproduce them in a lab setting. “Spiritual experiences involve pronounced shifts in perception and buffer the effects of stress on mental health,” the researchers wrote.

In a small experiment, researchers asked 27 adults to describe a moment when they “felt a strong connection with a higher power or a spiritual presence.” The team used the participants’ responses to create individualized scripts for each person: one meant to help induce a spiritual state, one to induce a state of stress, and one to create a neutral-relaxed state. The participants heard these scripts read to them while they were scanned with fMRI machines.

During the reading of the “spirituality” script, researchers noticed reduced activity in the medial thalamus and caudate — parts of the brain that were activated during the reading of the stress-related script and are normally linked to sensory and emotional processing. Meanwhile, compared to people who heard the “neutral-relaxing” script, people who heard the “spirituality” script had less activity in their inferior parietal lobule.

Taken together, this suggests that the transcendent spiritual feeling that so many humans spend chasing may simply come down to rising and falling activity in parts of the brain.

The ability to reproduce states of spirituality opens doors for even more research on the therapeutic importance of spirituality, which has been implicated in studies on addiction and mental health. “Spiritual experiences are robust states that may have profound impacts on people’s lives,” study author and neuroscience professor Marc N. Potenza, Ph.D. of Yale University’s Yale Child Study Center in a release published in May.

“Understanding the neural bases of spiritual experiences may help us better understand their roles in resilience and recovery from mental health and addictive disorders.”

More like this
Mind and Body
Feb. 6, 2023
Overthinking? This New Kind of Therapy May Finally Provide An Antidote
By Elana Spivack
Science
Jan. 28, 2023
How does the placebo effect take hold? A doctor explains two influential factors
By Kathryn T. Hall. and The Reader
Mind and Body
Feb. 1, 2023
Why the future of periods could be none at all
By Elana Spivack
LEARN SOMETHING NEW EVERY DAY.
Related Tags
Share: