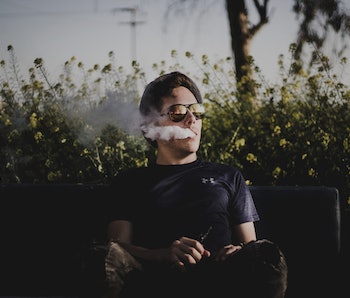 A relative newcomer to the tobacco scene, vapes have become increasingly popular among the coveted high-school demographic in the past few years. As vaping threatens to replace smoking as the en vogue way of irking your parents, many people have become wary of its health hazards. But according to new research from Newcastle University, vaping doesn’t appear to be as harmful as smoking, at least when it comes to your microbiome. Take that, mom!

In a small study published in PeerJ on Monday, Baylor College of Medicine postdoc Christopher Stewart, Ph.D. and his co-authors show that vaping doesn’t have the same ill effect on the bacteria of the gut as smoking cigarettes. The microbiome — referring to the naturally occurring microorganisms in human digestive tracts — is a topic of intense study these days, as it’s been shown to be tightly linked to many aspects of physical and mental health.

“The bacterial cells in our body outnumber our own human cells and our microbiome weighs more than our brain, yet we are only just beginning to understand its importance on our health,” lead author Stewart said in a statement published Monday.

In the study, the team took bacterial samples from 30 individuals — 10 who smoked tobacco, 10 who vaped with e-cigarettes, and 10 non-smokers. Then, the researchers genetically sequenced fecal, saliva, and cheek samples from each subject to examine their bacterial composition throughout the body.

Their findings separated the group into two camps. The tobacco smokers showed increased digestive tract levels of Prevotella, a species of bacteria associated with a higher incidence of colon cancer and colitis. Smoking also appeared to suppress Bacteroides, a species of beneficial probiotic. A dearth of Bacteroides has been linked to higher rates of Crohn’s disease and obesity. The vapers, in contrast, had similar microbial characteristics to the non-smokers.

While it’s still a nascent field, microbial studies have yielded a wealth of information about the key role the human microbiome plays in overall health. For example, the composition of our gut bacteria can actually alter our mood through the vagus nerve, which connects the brain to the digestive tract. Harvard researchers recently found that professional athletes from different sports have different gut bacteria present, leading some to speculate that you could boost athletic performance by adjusting the microbiome. A healthy microbiome can even stave off the harmful effects of malnutrition.

“More investigation is needed,” Stewart said in a statement published . “But to find that vaping is less-damaging than smoking on our gut bacteria adds to the incentive to change to e-cigarettes and for people to use them as a tool to quit smoking completely.”

More like this
Science
8.3.2022 3:44 PM
Ground-breaking technology restores dead organs back to a life-like state
By Miriam Fauzia
Science
7.26.2022 1:00 PM
Some people with epilepsy find relief with CBD — but the market is murky
By Kaiser Health News and Eric Berger
Mind and Body
8.4.2022 7:32 PM
This popular anti-aging goo can help regrow muscle — study
By Miriam Fauzia
Related Tags
Share: