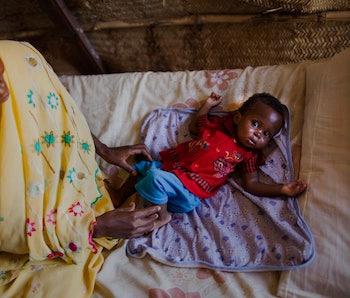 Malnutrition isn’t an epidemic that can be solved by bars of Plumpy’Nut alone. Researchers are increasingly aware that effective treatments must consider the microbiota — the bacteria of the gut. A study published Friday in the journal Science argues the key to saving children from malnutrition and starvation is to treat the gut microbiome — perhaps through novel probiotics or special bacteria-filled foods.

If a child with “bad” microbes in his/her intestine is undernourished, the resulting disrupted microbiota will impair postnatal growth and lead to neurodevelopmental abnormalities and immune dysfunction. The United Nations reports that a quarter of the world’s children are stunted, while poor nutrition kills 3.1 million children every year.

For this new study, an international team of researchers sampled gut bacteria from both healthy and malnourished Malawian children and injected those microbes into the guts of germ-free baby mice. The mice were fed meals and foods akin to what young Malawian child would eat — which typically want for nutrition.

Microbiologist David A. Relman, who is unaffiliated with this study, is cautious about what the findings suggest. He told The Washington Post that this work with mice may not translate to the same effect in humans.

“Because germ-free animals are born with grossly altered anatomy and function, provision of a new first-time microbiota to these animals may not perfectly mimic what happens in a natural setting,” Relman told the Post. Still, he said, the work is worth it — cultivating microbial communities is a potentially modifiable affair. If this leads to effective treatments, it would be revelatory.

What exactly this treatment will be is undetermined. Creating an edible probiotic with growth-promoting microbes sounds like a natural fit, but as The Atlantic points out, the bacteria in probiotics actually has a hard time sticking in the gut — making it ineffective. What is likely the most promising solution is enhanced milk.

Previous studies have found that the breast milk of mothers with healthy babies has more sugars containing sialic acid, which is important for brain development. Researchers from Washington University and the University of California, Davis are currently attempting to find a way to produce safe cow milk with sialic acid, modified to enhance gut flora.

While study author Jeffrey Gordon told the Post that this product “isn’t ready for prime time yet,” this work gives him hope that new types of therapeutic interventions for malnutrition are in the near future.

More like this
Science
Feb. 4, 2023
How Scientists Decide Whether Everyday Products Could Cause Cancer
By The Conversation and Brad Reisfeld
Science
Jan. 28, 2023
How does the placebo effect take hold? A doctor explains two influential factors
By Kathryn T. Hall. and The Reader
Science
Jan. 28, 2023
Viruses can speed up atypical brain aging — vaccines may offer peace of mind
By Andrew Bubak, Diego Restrepo, Maria Nagel and The Conversation
LEARN SOMETHING NEW EVERY DAY.
Related Tags
Share: