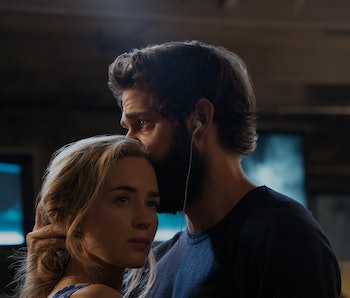 Theatergoers will again be able to visit to the quiet apocalypse of A Quiet Place because Paramount Pictures has confirmed that a sequel is currently in development.

According to Variety, at CinemaCon on Wednesday, Paramount Pictures chairman and CEO Jim Gianopulos said: “We’re thrilled to say that we’re already working on the sequel to A Quiet Place.” This comes as no surprise, considering A Quiet Place holds a 95 percent on Rotten Tomatoes and brought in $50 million in its opening weekend. For a movie that’s both a critical and commercial success, a sequel seems like a no-brainer. Screenwriters Scott Beck and Bryan Woods already had follow-up ideas before A Quiet Place hit theaters, which means that the sequel could happen fairly quickly.

“I think you could continue down one path that’s very obvious, or you could spin off into a completely unexpected direction,” Beck told Movie Web in March. “Which is certainly always interesting for us. The uncharted territory of filmmaking is always where you find the best inspiration.”

Where might that inspiration take them in the sequel?

Screenwriter Bryan Woods also told Movie Web in March that cost was a concern for A Quiet Place. The budget and scale had to stay small, but considering the film’s success, there’s a big chance we’ll see something larger-scale and more ambitious in the sequel. “We have so many scary ideas that just didn’t even make it into the final script [of A Quiet Place], let alone the final movie, but just written, we would love to see this sequence,” Woods said. “Some sequences that were just quite frankly too expensive to even do in this movie.” So expect something “bigger,” which could mean a few different things.

4. The Story Could Explore What Happened in a Different Part of the World

At an NYC press event Inverse attended in March, Woods and Beck confirmed what’s only hinted at in the movie: These monsters hunted humans around the entire world. We saw what happened to one family in rural upstate New York. But what about in more urban areas? New York City? Los Angeles? Even other countries? One newspaper clipping in the movie implied that the alien monsters rode a meteor from space that crashed into Mexico with the force of a nuclear bomb. Maybe we’ll see several different stories, including ground zero.

If a direct sequel to A Quiet Place happens sometime after the first movie, then we’ll no doubt see the Abbotts and/or other pockets of humans using what they learned against the monsters. Their hyper-acute hearing means that high-frequency noises and especially feedback loops hurt them immensely, so sonic weaponry is highly effective. A sequel where humans go on the offensive makes practical sense, but it probably wouldn’t be in the same spirit as the original. Maybe we’ll get a big time jump after the Abbotts have enough time to share what they’ve learned with the world?

2. We’ll Learn a Lot More About the Aliens

Inverse uncovered tons of details about the alien monsters in the film by talking with sound and VFX designers, and it looks like the aliens have more intelligence than you might think having just seen the movie. Could we somehow learn more about how and why they traveled to Earth? Do they have some kind of culture or means of legitimate communication? These are questions a sequel could explore.

1. John Krasinski Won’t Star in the Sequel, But He Could Direct

John Krasinski proved himself an adept horror director with A Quiet Place, so chances are high that he’d return to direct a sequel. But chances are super-low that he’d also star in the sequel. After all, his character, Lee Abbott was mauled by one of the alien creatures when he shouted to draw its attention, saving his two children in the process.