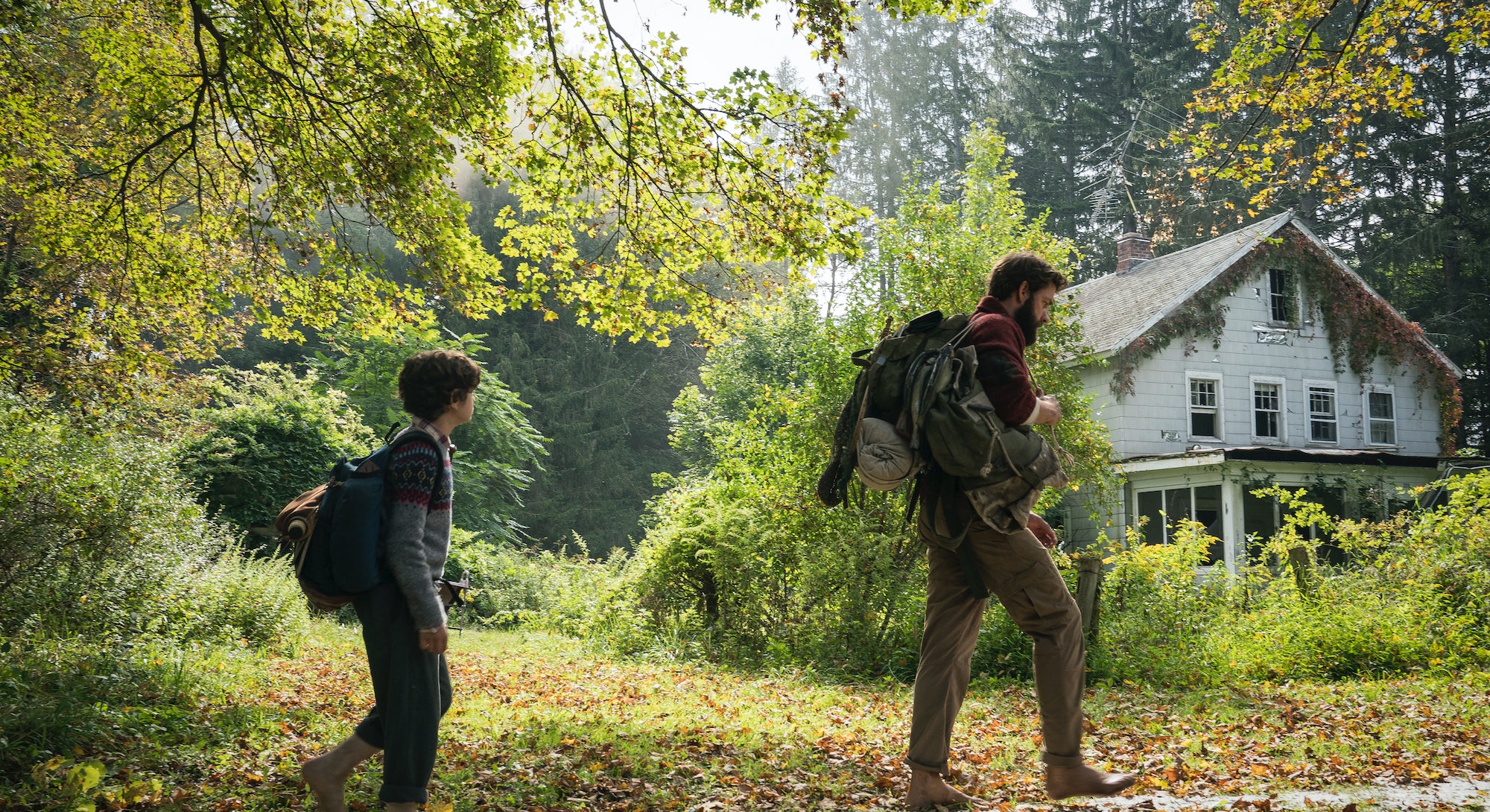 The biggest mystery in A Quiet Place stays with you long after you leave the theater.

Because director John Krasinski’s sci-fi horror narrative focuses on a family struggling to survive during the apocalypse, the backstory for the alien monsters terrorizing the planet happens mostly off-screen. But we know they’re blind monsters with hyper-acute hearing. All of that super-hearing has an explanation, the movie’s sound artists tell Inverse.

Huge spoilers follow for A Quiet Place and the nature of the movie’s monsters.

While you watch A Quiet Place, it’s easy to think of the creatures as unintelligent, but they’re actually closer to the xenomorphs from Alien. These things are actually deliberately invading our planet.

“We thought of them as intelligent and communicating with each other,” sound engineer Ethan Van der Ryn tells Inverse. Along with Erik Aadahl, Van der Ryn is one of the founders of E² Sound, the sound effects studio responsible for the sound design of A Quiet Place. “At one point we had much more of that [concept] in the track. A lot of that offscreen communication stuff we took out of the movie, but I think we definitely thought of them as highly intelligent and communicative, at least with each other.”

According to Aadahl and Van der Ryn, the film’s script only said these creatures were blind with an acute sense of hearing, which everyone who has seen the movie already knows. “Figuring out creature sound design specifically was one of the bigger challenges and something that we went through quite a lot of variations and twists and turns,” Van der Ryn says. “It wasn’t a straight path.”

But through defining how these creatures sounded and looked, E² and the rest of the production team determined that these creatures were intelligent, communicated with one another, and even used echolocation to survey their surroundings, like whales or bats.

“We experimented with this idea of echolocation,” Aadahl said. “They do it to reflect the environment around them and paint a picture with sound. That’s their searching mode.”

Ethan Van der Ryn also described the more animalistic “idling mode,” of the monsters saying, “We used a lot of snorting, sniffing, rasping — to give them an organic grossness.” In their third “attack mode,” they “move at incredible speed with their long limbs” and make “crazy violent snatching hits” with their limbs, and their thunderous movement conveys “weight and scale and power” accentuated by a blood-curdling shriek. Young Beau Abbott (Cade Woodward) witnesses this “attack mode” first-hand in the film’s first sequence when a creature lumbers out of the woods to kill him. Later, the nameless old man in the woods also hears those terrible attack noises.

We hear that same shriek most clearly when Regan Abbott’s (Millicent Simmonds) cochlear implant picks up their vocalization and accidentally creates a feedback loop of sound that harms their sensitive ears.

An easily missed detail from A Quiet Place notes that all of these creatures interact with the electromagnetic spectrum, causing lights to flicker and triggering large-scale power outages. “There’s some sort of electromagnetic interference between anything electronic and these creatures,” Aadahl said. “When they come into a room, the lights will flicker or when they appear on the security monitor, they’ll fritz.” Do they somehow feed off of electricity?

Other newspaper clippings we see in the film imply these creatures are indeed aliens that crash-landed when an asteroid hit Mexico with the force of a nuclear bomb. Everyone working on the movie wanted to preserve the mystery of where the creatures came from. To that end, screenwriters Scott Beck and Bryan Woods intentionally left details about the culture of the creatures vague.

The concept of “visual storytelling with no dialogue” was their approach. This gimmick was their writing foundation, which gave director John Krasinski room to eventually determine the nature of this creature.

Speaking on the Empire podcast, Krasinski explained how these creatures evolved: “So the idea is if they grew up on a planet that had no humans and no light then they don’t need eyes, they can only hunt by sound,” Krasinski explained, adding that their bodies are basically “evolutionarily perfect machines” that are invulnerable unless they expose themselves. That’s “the reason why they were able to survive kind of the explosion of their planet and then survive on these meteorites.” So they survived their own planet blowing up and rode asteroids across the galaxy until they accidentally hit Earth.

As the backstory for these critters evolved over the course of the film’s seven-month production period, so did their physiology. In fact, as Krasinksi has admitted the creatures underwent a last-minute physical redesign. So what did that original creature look like?

According to Industrial Light & Magic VFX supervisor Scott Farrar, the problem was simply that the first creature just “was not scary enough.”

“It was too strangely shaped to be humanoid,” Farrar told Inverse. “He would have the flaps that would open on his head, chest, shoulder, and thighs — everywhere. The old style was more a rhinoceros shape with fins and horns and a bony exoskeleton. He looked dangerous and prehistoric. But not scary.”

And so, in order to make this horror film more horrifying, Farrar went back to nature. “We looked to lot of naturalistic phenomenon like how a bat runs. You should look at an actual bat running: He goes one-two-one-two with overly long forearms just like our creature.”

The final creatue is a bony humanoid thing body not unlike the original Cloverfield monster, but slightly larger than a human and much heavier. To make them extra scary, the VFX team added huge sharp teeth that look like the Venom symbiote in Marvel Comics.

And then, there’s the creature’s face: armor-like panels of exoskeleton blossom out from its head — and only its head, much like the Demogorgon from Stranger Things — to reveal a fleshy area where there’s a huge ear. “It’s like dog slobber when the flap opens,” Farrar said, noting the mucus membrane that coats the area. “When they shut, we might do a splatter of saliva or goo.”

Farrar explained that when the creatures do this, the flaps “function like little radar dishes, picking up the sound just a beat before he hears them.” This also allows the creature to sense exactly where sound is coming from, by triangulating the sound waves with its different flaps. The drastic shift in sound while watching the movie is meant to reflect this.

“The ear opening up and the creature, all of the sounds blossom and you for a moment experience what the creature hears sonically,” Aadahl added, noting how A Quiet Place follows the sonic perspective not only of the creatures, but of also of character Regan Abbott, who is deaf.

In a stroke of brilliant irony, then, it’s Regan’s cochlear implants that allow her mother to successfully kill one of the creatures, but that’s only one. We’re led to believe they could handle the other few creatures in their area, but will they be able to weaponize sound enough to save the world?

Now, all we need is for a sequel to answer all these questions, and for J.J Abrams to swoop in an retroactively explain how this was a Cloverfield movie all along.