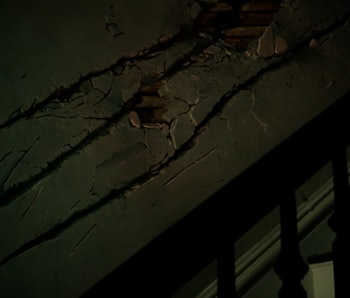 We’re but a day away from the official release date of John Krasinski’s critically acclaimed A Quiet Place, and fan fervor over the creatures behind the film’s silence-or-death plotline doesn’t appear to the letting up. Interestingly, however, we may have been looking a wholly different movie-going experience if not for a last-minute change to the monster’s design.

In an interview with Collider published Wednesday, Krasinski — who co-wrote, directed, and starred in the film — told the publication’s own Steve Weintraub that the freakishly fast creatures underwent a last-minute redesign that turned out to be “way better.”

“I had designed this character and this creature, and we loved it. We had so many details like drawings and boards and things for the kids to look at,” he says. “And then I was really deep in the [post-production], and it was one of those moments where — this sounds super nerdy, but now I understand when people talk about visual effects and seeing this — you could just see that he wasn’t going to work as well as a different design.” He! We have gendered this noise-hating nightmare, folks!

Krasinski went on to say that when considering the “scenes and the shots that we were gonna put him in, it just didn’t look like it was going to work.” He then contacted Industrial Light & Magic, a visual effects company, to move in “a completely different direction.” Because they — like everyone else — “loved” the film, Krasinski says, they rolled with the punches. He adds, “I will say that, to their credit, they have always said, ‘You made the right decision.’ The other guy was cool, but this guy is way better.”

It’s hard not to wonder whether an alternative film with another version of the creature would have played as well with critics, who appear to overwhelming adore the film (a recent lone outlier is responsible for its score falling to 98 from 100 on Rotten Tomatoes).

Viewers will have a chance to see for themselves when the film hits theaters on April 6. At that time, we’ll finally have an opportunity to weigh that Cloverfield-crossover theory — which, totally here for it.

More like this
Culture
6.17.2022 11:31 AM
45 years ago, the worst Exorcist sequel almost killed the franchise forever
By Jon O'Brien
Culture
6.26.2022 12:30 PM
40 years, The Thing set a new standard for sci-fi thrillers — and accidentally inspired a modern movement
By Andy Crump
Entertainment
6.27.2022 11:30 AM
You need to watch the scariest movie of the 20th century before it leaves Netflix this week
By Eric Francisco
Share: