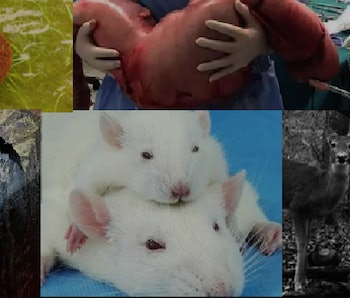 With 2017 coming to an end, there’s much to reflect on. What was the union dispute that Maz Kanata said she had to deal with? Did she really hook up with the Master Codebreaker? Of course, there’s stuff to think about besides Star Wars as well — galaxies of events in our own world, messy, scary, and beautiful alike. There was also a lot of weird stuff that happened, particularly in the world of science.

We’re here to talk about the weird stuff.

Below is Inverse’s roundup of some of the most perplexing science moments that happened this year, including feces-filled colons, fatbergs, and the discovery of some of our weirdest gilled-and-teethed ancestors. Some of these moments turned out to have wondrous explanations, and others remained just very, very gross. Here’s to hoping that 2018 is just as wonky (okay, maybe a little less wonky).

This Bag-Like Sea Creature May Be Human’s Oldest Ancestor

In 2017 we learned an incredible amount about human ancestors, one of which was a bit less cute than others: the Saccorhytus coronarius. The bag-like creature, depicted in the artist rendering above, was identified by scientists in January in the journal Nature. Its fossils were found in Shaanxi Providence in central China in the form of 540 million-year-old specimens the size of tiny black grains.

The scientists determined that the bags belong to the family of deuterostomes, which makes them ancestors of many species, including humans. It’s not exactly who you want on the family tree: The microscopic entity moved around by wiggling its gilled body around in mud and pooped through its mouth. But hey, it’s family!

Off the coast of southern Japan on Yakushima Island, macaque monkeys are mounting and riding Sika deer in an attempt to get frisky. This relationship, apparently, is usually consensual, scientists explained in the January edition of Primates. The two animals have long lived side-by-side on the island, with the deer eating the food the monkeys drop from the trees and the monkeys riding the deer around for fun. Only now, scientists have documented evidence of male monkeys — usually the ones experiencing a hormonal surge without a female partner — getting all up on the deer, like they are their personal vibrator.

In December, scientists realized that female Japanese macaques do the same thing. One reason this might is happening is because the females are practicing their sexy moves before they actually start interacting with males of their kind.

Rat Heads Were Stitched Together In a Head Transplant Experiment

In one of the more horrific studies that happened this year, scientists successfully attached the head of a smaller rat to the body of a larger rat. While the experiment may look like the stuff of nightmares, the intention was to show a proof of concept for a new head transplantation technique. The team of Chinese and Italian scientists explained in the April edition of CNS Neuroscience and Therapeutics that they were able to keep both of the rat’s brains active by pumping their bodies with the blood of a third mouse. It was led by Dr. Sergio Canavero, the Italian doctor who controversially said he performed a human head transplant in November (he didn’t).

Plastic Bags Were Used as Artificial Wombs For Lambs

In April, researchers from the Center for Fetal Research at the Children’s Hosptial of Philadelphia announced in Nature that they successfully raised eight fetal lambs in artificial wombs known as “Biobags.” In the bags the fetal lambs were able to breathe and swallow just like they would in a real womb, and the researchers reported their system — which differs from previous artificial wombs because it doesn’t operate with a pump — could be used in the future to support premature human infants.

This Creepy Deer Ate Human Bones For a Not-Creepy Reason

You probably think of deer as sweet forest animal friends who subsist on diets of fluffy shoots and greens. But deer can be much more metal, as evidenced by the bone-eating deer scientists wrote about in the Journal of Forensic Science in May. The deer they identified — the first to be caught snacking on a human corpse — likely began its meal because it was in a period of wintry “nutritional stress.” By gnawing on bones, it was able to stock up on necessary minerals like phosphorus, calcium, and sodium — and it’s not like the human needed those anymore, anyway.

Doctors Removed 28 Pounds of Feces From a Constipated Man

In June, a team of Shanghai-based doctors announced they removed over 28 pounds of feces from the colon of a 22-year-old Chinese man. The feces had accumulated in his colon over the course of his lifetime, which sounds fucking miserable. At the time of the surgery, the doctors told the Chinese news site The Paper that the man looked nine months pregnant. By the end of the three-hour surgery, the doctors removed the accumulation of poop and parts of his colon — in turn setting free a much happier man.

One of the more unexpected things to come from the awful floods that affected Texas during Hurricane Harvey were the dozens of floating fire ant rafts that began popping up around the state. Their survival instincts prompted them to do the incredible: Link together to form a floating colony, a process in which each ant takes a turn being above and below water.

Fatbergs Clogged the Sewers of London

Much like the Balrog lurking in the depths of the Mines of Moria, giant fatbergs — nasty accumulations of congealed fat, diapers, and wet wipes — were discovered in the sewers of London, accumulating in power and size. In October, the Telegraph reported that four fatbergs were clogging the city’s sewers. The largest one measured in at 850 feet long and weighed over 143 tons. In November, the beasts were finally cleared away, and Thames Water announced it intended to turn the monstrosity into 10,000 liters of biodiesel.