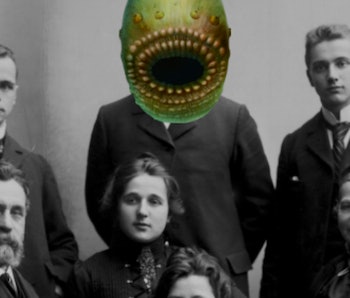 When Carl Sagan said that we are all “made of star-stuff,” he was being extremely generous about our genesis. According to new research, we also come from a bag-like sea creature that puked out its own poop. It’s a less flattering origin story, but it’s equally true.

Scientists claim that this microscopic critter, technically known as a Saccorhytus coronarius, is the oldest known ancestor of humans.

In a study published Monday in Nature, researchers write that it existed during the early Cambrian period, nearly 540 million years ago. It’s considered to be the most primitive form of a biological category of animals called deuterostomes, which makes it the common ancestor of many species — including people.

It turns out that Katy Perry wasn’t so wrong when she suspected that people might feel like plastic bags — feeling like a bag is in our DNA.

The international team of researchers came across the microfossils of the Saccorhytus in limestone found in Shaanxi Providence, in central China. The fossils, which look to the naked eye like tiny black grains, were then examined with an electron microscope.

That data was placed into a CT scan, which helped the team determine how it once looked. Below is an artist’s impression of what it may have looked like. It wasn’t a beautiful bag, but it’s ours.

The Saccorhytus, which lived in a shallow sea, was covered in thin skin and small conical structures that the scientists hypothesize were a precursor to gills. It wiggled around in the mud with its bilaterally symmetrical body, which it passed on to all of its descendants, and engulfed food with its huge mouth. It also apparently did not have an anus, which means its body disposed of its waste in a particularly indelicate way.

“If that was the case, then any waste material would simply have been taken out back through the mouth,” co-author University of Cambridge paleobiologist Simon Conway Morris said in a statement, “which from our perspective sounds rather unappealing.”

Besides being a discovery that further illuminates our own origins, the Saccorhytus’ existence may possibly add further validity to the “molecular clock” theory. This is the idea that DNA and protein sequences within organisms evolve at a relatively constant rate over time. The molecular clock, it’s believed, can explain when species diverged; genetic differences are proportional to how much time has passed since species shared an ancestor.

The tricky part with this theory, however, is that there has been a “long-standing mismatch between fossil evidence and prehistoric life,” the authors write; in other words, scientists working in the past did not have any fossils to suggest what was happening 540 million years ago and hypothesized that whatever fossils did exist were just too small to find. Now, with the discovery of the microscopic Saccorhytus, that hypothesis appears to have been true.

And by circumstance of discovery, we get a new photo to attach to the family tree. Next time someone says you’ve got a big mouth, you can say you know where you got it from.

More like this
Science
21 hours ago
Studying ancient human DNA has unlocked our origins — but the ethics are hazy
By Emiliano Rodríguez Mega and Knowable Magazine
Science
Jan. 29, 2023
Are coyotes dangerous to dogs and cats? Here’s how to keep your pets safe
By Tara Yarlagadda
Science
Jan. 22, 2023
Infection expert answers 7 top questions about Covid-19’s “Kraken” subvariant
By The Conversation and Sameer Elsayed
LEARN SOMETHING NEW EVERY DAY.
Related Tags
Share: