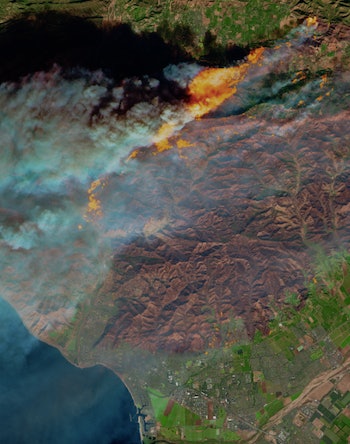 A number of wildfires are currently raging in southern California, the latest being the Skirball fire near Bel Air, Los Angeles, which has forced mandatory evacuations and shut down the 405 freeway amidst walls of flames.

Of the more major blazes, the Thomas Fire in Ventura, Creek Fire near Sylmar and Rye Fire near Santa Clarita have all consumed thousands of acres each. They burned so vastly that they can actually be seen from space, according to NASA satellite imagery.

As early as Tuesday, NASA’s Moderate Resolution Imaging Spectroradiometer on NASA’s Terra satellite could detect evidence of the fire, according to the Weather Channel. The big red mark is the Thompson fire:

The satellite also shot more finessed images that show plumes of smoke coming from the Thompson fire Tuesday. You can also see smaller trails of smoke from the nearby Creek and Rye fires.

The satellite also shot more finessed images that show plumes of smoke coming from the Thompson fire Tuesday. You can also see smaller trails of smoke from the nearby Creek and Rye fires.

However, this false color burn scar, shot by the Multi Spectral Imager on the European Space Agency’s Sentinel-2 satellite, is especially incredible to look at.

As you can guess, the burned area is brown, while active fire is yellow and red. Developed areas are seen in grey, leading to a jaw-dropping understanding of the sheer scope of destruction — and just how close it’s coming to local neighborhoods. Since the burn scar photo was shot on December 5, with the added addition of the fire near Bel Air, this visual will likely be significantly different as the week goes on.

This map, via CalFire, also shows all the fires currently burning in California, with icons implying their various degrees of severity.