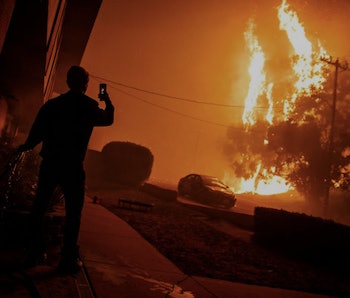 A massive wild fire in southern California, dubbed the Thomas Fire, spread rapidly through Ventura overnight Monday. By Tuesday morning, 31,000 acres had been burned, and 27,000 people had been forced to evacuate the area.

Images of the Thomas Fire were shared across social media overnight, showing the dramatic impact it was having on Ventura. And just as the Thomas Fire was creeping closer and closer to people’s homes, yet another wildfire began gaining traction. In nearby Los Angeles County, a 2,500-acre brush fire caused by Santa Ana winds near Sylmar flared up overnight.

California has traditionally been a beacon for wildfires for a number of reasons, but this year has been particularly bad.

Wildfires tend to break out in the fall in California; an aftermath effect of dry, sunny summers. Powerful warm winds unique to California — called Santa Ana winds in the south, and Diablo winds in the north — have the ability to spread wildfires faster than they would in other parts of the country.

California experience a particularly wet winter in 2017, which allowed a lot of fresh vegetation to grow, especially in Santa Rosa and Napa — areas hit hard by fires in October.

The wet winter was followed by a record hot summer, drying up a lot of the winter’s growth and leaving California with highly flammable brush.

What causes wildfires? Contrary to the name, it’s typically humans, according to the National Park Service.

Discarded cigarettes, unattended campfires, burning debris and other human idiocy accounts for 90 percent of the nation’s wildfires. The other ten percent is caused by lighting or lava.

In 2017, California has had the unfortunate conditions that can turn accident into calamity.