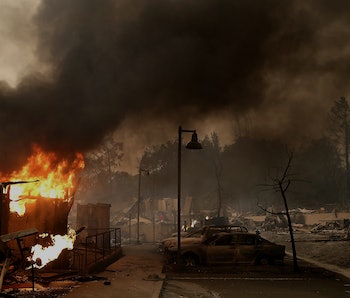 At least 11 people have died in the wildfires in northern California that have destroyed more than 115,000 acres in its wake. Seventeen major fires are still actively burning as of Tuesday morning, the National Wildfire Coordinating Group says.

This public map from the California Department of Forestry and Fire Protection site is continually updated with location and magnitude of the various fires, as well as where additional information can be found on area evacuations and damages.

Photos and videos out of California show just some of the 1,500 houses and vineyards burnt to the ground, skylines filled with smoke, and sunrises painted red. More than 20,000 residents were ordered to evacuate in the most affected areas.

Another map from the Governor’s Office of Emergency Services shows the location of each wildfire in the state: