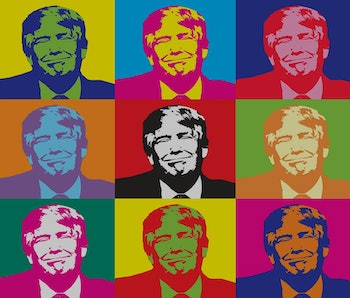 One year ago this Wednesday, Americans headed to the polls to elect the 45th president. By 2:30 a.m. Eastern time the next morning Donald Trump was giving a victory speech in New York City. Ultimately, Trump won the presidency with 304 Electoral College votes, although Hillary Clinton won the popular vote by about 2.9 million votes, as many of the people who voted for her live in America’s big cities.

America largely uses a two-party system —with memorable exceptions from independent candidates and third-party candidates — but a whether multi-party system would have changed the outcome of the 2016 election has been a subject of debate.

Republicans got in line behind the polarizing Trump by the time the Republican National Convention rolled around the summer before the November election. Not even a convention speech by former Trump rival Senator Ted Cruz that urged party members to “vote your conscience” seemed to have an effect on the party’s voting patterns. (Cruz was booed off stage by Trump diehards in the audience.) In America, a multi-party system might yield more qualified candidates, but it would be asking humans to go against an increasingly tribal political environment.

It’s true that the country’s reliance on two political parties certainly bolstered Trump’s chance of winning the presidency. But why that is stems from the numerous factors that have kept the United States a de facto two-party system since the Civil War.

While the country has cycled out from being a nation of Federalists, Democratic-Republicans, Whigs, and Know-Nothings, the only two parties that really have weight today are the Democrats and Republicans.

Today, there are more than 100 national third parties, and a recent report conducted by Pew Research Center found there are at least nine distinctive political typologies in the United States, from core conservatives to solid liberals.

When Donald Trump first ran for the presidency in 2000, he ran as a third party candidate within the Reform Party, memorably attacking Pat Buchanan. “Anybody that’s in love with Adolf Hitler, frankly, I’m not a big fan of,” he said in 1999; the irony of that statement came into sharp focus in 2017 when his supporters waved Nazi flags in the streets of Charlottesville, Virginia. Trump ultimately bowed out because he thought the party was too dysfunctional to win a general election. In reality, the “winner takes all” system of American electoral politics would have prevented a third party from winning anyway.

The “winner takes all” system means that candidates in the running for the presidency and for seats in Congress only need a plurality of the vote to be elected. There’s no prize that comes with second place and the two-party system is bolstered by a political theory called “Durverger’s law”: Political systems where the highest vote wins inevitably get stuck in two-party systems because there’s no objective to give votes to someone who will inevitably lose.

Another likely scenario with a new, third-party candidate is that they can “split the vote” within a mainstream party, causing that party’s defeat. That’s what happened when Theodore Roosevelt became the candidate of the Bull Moose Party in the presidential election of 1912 as an alternative to the Republican party’s nominee, William Taft. A portion of the Republican vote went to the Bull Moose Party, which cleared the way for the Democrats to win with Woodrow Wilson.

That’s also why the GOP ultimately decided to throw in its support for Trump — they were too afraid of splitting the party if he ran as an independent.

The Electoral College system exacerbates the “winner takes all” system because what political parties need to do to win the presidency is concentrate on winning the majority of the electoral votes. According to the U.S. Constitution, the outcome of the presidential election is ultimately decided by these votes and a winning candidate has to have at least 270 electoral votes to win. Each state is given electoral voters based on how many representatives it has in Congress, and a total of 538 electoral votes are spread throughout the fifty states.

See also: What a 2050 Population Prediction Says About the Future of America

The plurality winner in each state (that’s the “winner takes all” party) gets all of the state’s electoral votes. This especially promotes a two-party system at the state level — without electoral votes, third-party candidates don’t have a chance at election success. As long as the Electoral College is still constitutionally how we decide the presidency, it doesn’t matter how much traction third parties get, they won’t be a viable option.

The political system is designed to give power to just two parties. Trump’s victory came largely because of this reliance, but it will take far more than just support for a multi-party system to actually keep the non-popular president from winning again.

More like this
Culture
4 hours ago
Lost never solved its weirdest sci-fi mystery, but this episode came close
By Jake Kleinman
Culture
Feb. 4, 2023
The End of the Cold War Could Have Killed James Bond. Instead, it Made Him Stronger.
By David Grossman
Mind and Body
Feb. 1, 2023
Why the future of periods could be none at all
By Elana Spivack
LEARN SOMETHING NEW EVERY DAY.
Related Tags
Share: