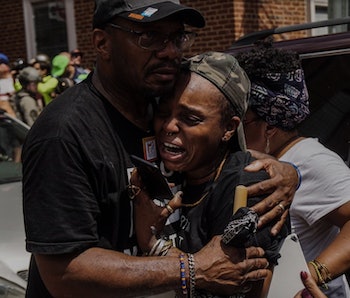 White supremacists, members of the KKK, and independent neo-Nazi militias gathered in Charlottesville, Virginia, this week in an event they called “Unite the Right.” They were met by a group of counter-protestors, which included the group known as Antifa, short for anti-fascist.

Following orders to disperse by police, an apparent supporter of the “Unite the Right” rally drove a car into a group of counter-protestors Saturday, killing one and injuring 19.

President Donald Trump commented on the violence via his Twitter account while on vacation at his golf club in New Jersey, issuing some seven tweets about it. Here was the most recent one, as of 7:25 p.m. Eastern on Saturday. “So sad!” the president commented. Trump was roundly criticized for his comments, which were viewed as “insufficient.”

Here are the events in Charlottesville as they unfolded over Friday and Saturday:

On Friday night, a group of white nationalists gathered while holding burning torches and carrying Confederate flags, American flags bearing swastikas, and MAGA hats. They surrounded a statue of General Robert E. Lee, who commanded the Confederate Army in Virginia from 1862 to 1865. The group of protestors, chanting (among other things) “Jews will not replace us,” remained active overnight.

When photos of the white supremacist rally hit the internet, counter-protestors, including the confrontational Antifa, came to meet them.

At 11 a.m. on Saturday morning, the white supremacists and counter-protestors began breaking out into fist-fights, tearing down the police barricades that had been erected between them. The local police force retreated temporarily, returning 30 minutes later with the state National Guard. Around 2 p.m. Saturday, a car with Ohio plates drove into a group of anti-fascist protestors, killing one and injuring at least 19 others.

Trump then addressed the white power rally using vague terms in a live-streamed press conference, in which he decried violence that occurs “on many sides.” He repeated the phrase “on many sides,” shaking his head, and then asserted that neither he nor President Barack Obama were to blame for it. Trump repeated a sentiment about coming together.

Photos of the gathering hit the New York Times Thursday evening, but close-up shots of the actual protestors went live on Twitter around the same time. The American public was shocked to see many of the white supremacists sieg heiling and wearing swastikas.

Other Twitter users pointed out that “blood and soil,” one of the phrases the white supremacists were heard chanting, refers to the idea that ethnic diversity in the United States means “white genocide.” It argues that Caucasian people have a divine right to the soil, and sovereignty, of the United States.

When counter-protestors began to show up, several people in the crowd starting shouting racial slurs at them.

Protestors continued demonstrating into Friday night, and when the sun came up, they were joined by the Virginia National Guard, local police, and a collection of neo-Nazi private militias.

The physical altercations that erupted were also not a part of the president’s speech. Many of the following photos are disturbing.

Hillary Clinton blamed the violence on white supremacy, Bernie Sanders decried white nationalism and racism, and previous Republican presidential candidate Marco Rubio urged the president to “describe events in Charlottesville for what they are, a terror attack by white supremacists.”

More like this
Culture
1 hour ago
Stranger Things Season 5 theory hints at a new superhero ally for Eleven
By Mónica Marie Zorrilla
Culture
7.6.2022 11:00 AM
64 years ago, Hollywood made the most rip-roaring Viking movie ever
By Emil Stern
Culture
7.6.2022 10:00 AM
8 Norse gods you need to know before Thor: Love and Thunder
By Robin Bea
Share: