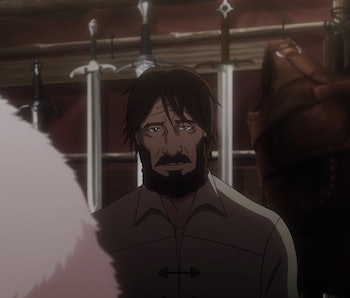 Trevor Belmont, the vampire-hunting protagonist of Netflix’s just-released Castlevania anime series, famously wields a deadly whip. He also carries a short sword, but those aren’t the only weapons in gloomy Wallachia. In the second episode of the series, while visiting besieged the city of Gresit, he talks with a blacksmith. And, behind the blacksmith, you can spot two big sword-shaped Easter eggs shouting out Game of Thrones and Lord of the Rings.

The sword to the left of the blacksmith’s head is Longclaw, the Valyrian steel currently in possession of Jon Snow. The blade, which was originally the Mormont family’s ancestral weapon, now boasts a distinctive white wolf pommel. Back in February, the producer behind Castlevania, Adi Shankar, told IGN that the series would be “very much Castlevania done in the vein of Game of Thrones.” He wasn’t kidding.

To the right of Longclaw, you can see Andúril, Aragorn’s sword which was reforged from the shards of Narsil in Lord of the Rings. The sword to Andúril’s right might be some famous fictional pop culture blade too, but I can’t place it.

Redditor RFarmer spotted the Easter egg, so props to them.

All four episodes of Castlevania Season 1 are currently streaming on Netflix. The series has already been renewed for an 8-episode Season 2, which is great if you were left wanting more after the brief debut season.