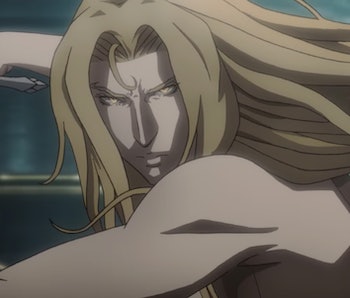 The Nintendo video game-turned-Netflix series, Castlevania, has finally arrived after six months of hype around the show, and if the teasers and trailers for the anime series are any indication, it will be a brilliant, bloody, epic series. Adapted for Netflix, the story is about “the man who will kill Dracula.”

As anybody who has stayed up late to see new Netflix original programming knows, new episodes premiere at 12:01 a.m. Pacific (where Netflix’s headquarters are based), which means 3:01 a.m. on the East Coast. So, if you live in New York, you’re staying up until (or waking up at) 3 a.m. on Friday, July 7 to dive into what looks to be a frightening series.

The series is comprised of four 30-minute episodes and can be seen anywhere you can watch Netflix.

Castlevania on Netflix was written and executive produced by British comics writer Warren Ellis. Among the seven executive producers is Adi Shankar, who said earlier this year that the series will be “R-rated as fuck.”

The series was first announced on February 9, one of a slew of titles in a press release.

British actor Graham McTavish, probably best known for his roles on Outlander and Preacher, plays Dracula. Actress Emily Swallow, who plays Lisa Tepes, the wife of Dracula, teased the series recently in this way: “Ever wonder what it’s like being married to Dracula? I got to find out as his wife.”

Shankar, in a video with McTavish on June 28, announced the cast on YouTube. Playing Trevor Belmont — of the vampire-fighting Belmont family in the video game series — is Richard Armitage, best-known as Thorin from The Hobbit film series.

Inspired by the classic video game series, Castlevania is a dark medieval fantasy following the last surviving member of the disgraced Belmont clan, trying to save Eastern Europe from extinction at the hand of Vlad Dracula Tepe himself. The animated series is from Frederator Studios, a Wow! Unlimited Media company, written by best-selling author and comic book icon Warren Ellis and executive produced by Warren Ellis, Kevin Kolde, Fred Seibert and Adi Shankar.

Watch Castlevania on Netflix here and watch the trailer below.

If you’ve got a half-hour to kill, you could do worse than watching this “All Secrets, No Deaths” video of Castlevania posted on YouTube. It’s sick.

A little about this classic series of video games, which began in America with a release exactly 30 years ago:

The original game was released on May 1, 1987, a year after it was released in Japan, when very few horror video games were on the market. Players took on the role of Simon Belmont, who primarily used a whip to fight vampires — but he also took on Medusa and Frankenstein’s monster. It was by far the scariest game of the era, even in two-dimensional 8-bit. It was regarded as one of the hardest games to play, which made it popular because being good was the result of skill, not mere button-mashing.

A sequel, Simon’s Quest, came out in December 1988, which was more of an RPG experience. The third and fourth games, Castlevania: The Adventure, for Nintendo Gameboy, and 1990’s Castlevania III: Dracula’s Curse followed before Super Castlevania IV for Super Nintendo — a reboot of the original — was released, featuring tighter controls and new uses for Simon’s whip. (It was still very hard to master.) In March 1994, Castlevania: Bloodlines came out for Sega Genesis-only in America. In 1995, Castlevania : Dracula X came out to little fanfare before Castlevania: Symphony of the Night was released for PlayStation in 1997, which remains a fan favorite. Several other games followed, right up to Castlevania: Lords of Shadow 2, released in 2014 for PlayStation 3, Xbox 360, and PC.