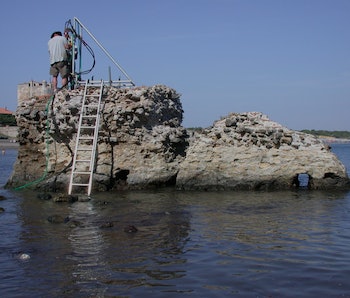 Two thousand years ago, the Romans built massive seawalls and piers in the harbors of ancient cities, and today those structures still stand, the concrete harder and stronger than it ever has been.

The material is extraordinary. Salt water corrodes modern concrete within years or decades, and yet somehow these monuments have not only persisted but strengthened and repaired themselves.

“It’s the most durable building material in human history, and I say that as an engineer not prone to hyperbole,” Philip Brune, a research scientist at DuPont Pioneer, tells The Washington Post.

Engineers have known that the secret must lie in the particular recipe for Roman cement — a mixture of ash from the Campi Flegrei supervolcano and quicklime. But now, a team of scientists has discovered the hidden chemistry of what makes this concrete so durable.

It turns out that the material isn’t just resistant to seawater, it’s actually stronger because of it. In a paper published Monday in American Mineralogist, Maire Jackson of the University of Utah and co-authors describe how a reaction between the cement and the ocean spurs the growth of a rare crystal and supports and fills in the material’s structure. The saltwater reacts with phillipsite, a mineral naturally present in the volcanic rock, to form aluminous tobermorite, which strengthens the concrete’s internal structure.

Modern science is a little late to the self-repairing concrete game. Hendrik Jonkers of Delft University in the Netherlands recently made a splash with his concrete, which he infuses with bacteria that work to fill holes and cracks. But ancient Romans had their own recipe millennia ago.

Stable marine structures are going to become a lot more important in the future thanks to the rising sea levels that inevitably come with global warming. Threatened by climate change, coastal cities will be forced into a no-win choice between shoring up infrastructure with impressive physical barriers or retreating inland. Either way, seawalls and other human-made maritime structures will become more important and more expensive over coming decades and centuries. By taking notes from the ancients, we may hold on in our battle with nature for the coast just a little longer.

Pozzolanic reaction of volcanic ash with hydrated lime is thought to dominate the cementing fabric and durability of 2000-year-old Roman harbor concrete. Pliny the Elder, however, in first century CE emphasized rock-like cementitious processes involving volcanic ash (pulvis) “that as soon as it comes into contact with the waves of the sea and is submerged becomes a single stone mass (fierem unum lapidem), impregnable to the waves and every day stronger” (Naturalis Historia 35.166). Pozzolanic crystallization of Al-tobermorite, a rare, hydrothermal, calcium-silicate-hydrate mineral with cation exchange capabilities, has been previously recognized in relict lime clasts of the concrete. Synchrotron-based X-ray microdiffraction maps of cementitious microstructures in Baianus Sinus and Portus Neronis submarine breakwaters and a Portus Cosanus subaerial pier now reveal that Al-tobermorite also occurs in the leached perimeters of feldspar fragments, zeolitized pumice vesicles, and in situ phillipsite fabrics in relict pores. Production of alkaline pore fluids through dissolution-precipitation, cation-exchange and/or carbonation reactions with Campi Flegrei ash components, similar to processes in altered trachytic and basaltic tuffs, created multiple pathways to post-pozzolanic phillipsite and Al-tobermorite crystallization at ambient seawater and surface temperatures. Long-term chemical resilience of the concrete evidently relied on water-rock interactions, as Pliny the Elder inferred. Raman spectroscopic analyses of Baianus Sinus Al-tobermorite in diverse microstructural environments indicate a cross-linked structure with Al3+ substitution for Si4+ in Q3 tetrahedral sites, and suggest coupled [Al3++Na+] substitution and potential for cation exchange. The mineral fabrics provide a geoarchaeological prototype for developing cementitious processes through low-temperature rock-fluid interactions, subsequent to an initial phase of reaction with lime that defines the activity of natural pozzolans. These processes have relevance to carbonation reactions in storage reservoirs for CO2 in pyroclastic rocks, production of alkali-activated mineral cements in maritime concretes, and regenerative cementitious resilience in waste encapsulations using natural volcanic pozzolans.