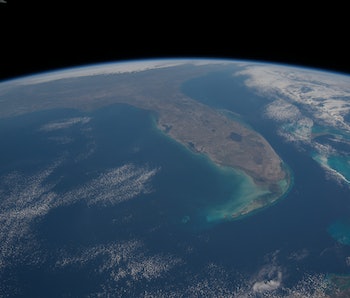 Thousands of miles of U.S. coast are threatened by erosion, storms, and rising seas. Left alone, the barrier islands that protect coastal plains from New York to Mexico would do just fine adapting to climate change. Storms would eat away at the front edge of the islands, but throw sand over the backside, resulting in more elevated bulwarks closer to the shore. The problem is that humans love beaches and pay extravagant prices to live on these natural barriers. The rich are harder to move than sand.

Valuable properties with powerful owners control vast sections of coast so governments, in their thrall, build enormously expensive seawalls that inevitably speed the erosions of beaches, which are replaced artificially at mounting cost. It’s the vicious cycle of sunbathing, and Orrin Pilkey says it’s a loser’s game. Miami is doomed.

Pilkey, a retired Duke University professor, has been telling people to back the hell away from the ocean since the 1970s. His latest treatise, Retreat From a Rising Sea, co-written with his son and daughter, argues that a migration away from the world’s coast is inevitable, and that the sooner policies encourage people and infrastructure in that direction, the less painful the move will be. Pilkey told Inverse about what needs to be done, and why there’s no hope for Florida.

Why is it a futile effort to protect coastal homes and development?

How much would it cost to build 3,000 miles of seawall along the East Coast of the U.S., not to mention the rest of the world? On a barrier island, you have to build seawalls on all sides of the island. Where are we going to get the money for that? Then the problem becomes that seawalls destroy beaches. We saw this back in the early ‘70s in Miami Beach, where basically there was no beach left, before they nourished it.

Nourishment is very costly. We just recently nourished a beach north of Rodanthe, North Carolina, on the Outer Banks, for two miles, and it cost $10 million for each mile. And the beach lasted, really, about a year. I mean that’s an extraordinarily bad case, but these are multi-million dollar projects without exception, and in Florida they might last seven years, in North Carolina three years, New Jersey two or three years. And then, when sea level rises, this cost is going to increase and the lifespan will decrease.

How big is this problem globally?

There are 10,000 Inupiat Eskimos in Siberia, Alaska, and Northern Canada that, because of a combination of sea level rise and melting permafrost, need to be moved. And we’re starting to look at moving them. Then there are the atoll nations of the Indian and Pacific Oceans — there, there’s about a million inhabitants, and a number of them are already moving.

The biggest problem of all is on the world’s deltas. The Ganges delta is the most famous problem. There are several million people on this delta that need to be moving, not only directly because of the rising sea level, but because as the sea level rises, the frequency of storms and the effect of storms increase — the storms extend further inland. On deltas, the problem is that they are all very low-lying. And they are usually sinking. So besides the Ganges delta, there’s also the Irrawaddy delta in Myanmar, where 100-and-some-thousand people died in that last hurricane.

There’s the Mississippi delta, where we’re planning to move one small village. Overall, we have hundreds of millions of people in deltas that will have to be moved. In India, they’ve already built what they call the Great Wall of India, the massive double barbed wire fence with concertina wire and all that stuff, to try to keep out the Bangladesh people who will be fleeing sea level rise.

You’ve been advocating for a retreat for long time. Is anyone listening?

For the most part it’s falling on deaf ears. Not only on the part of the individuals buying property, but on the part of the politicians. We even have politicians in the state of Florida, for heaven’s sake, that are denying sea level rise. One of the things that’s said by a lot of politicians is, ‘Well I’m not a scientist so I can’t really evaluate this.’ It’s so irresponsible on the shoreline issue, because so many people are going to be hurt because of sea level rise.

After Hurricane Sandy, there were some little bits of good stuff going on. Like the purchase of houses that were threatened, and would be threatened in the next hurricane again, on Staten Island, New York, where they paid the price that the house would have been worth before the storm. There are a few places where they have decided not to allow development in New York. There’s little bits and pieces like this, just about everywhere there’s little pieces, except for North Carolina, perhaps, where we’re really dragging behind, and of course Florida, which has the biggest problem, and does the fewest things about it.

How did it get so bad in Florida?

You have hundreds of miles of high-rise lined shoreline. What are you going to do about this? You can’t move the buildings — there’s no place to move them to, and the cost of moving 20-storey buildings makes it highly unlikely that they’ll ever be moved. So two things can happen. A hundred years from now we’ll have these islands lined by very, very high seawalls on all sides, or they’ll be offshore fishing reefs of some kind. There’s just no other long term future for much of the high-rise lined shoreline in Florida.

Miami is sitting on top of the Miami limestone, and it’s a 50-75 foot thick, highly porous limestone. It is so porous that there are little ponds within Miami where you can actually measure tides. There are little one-centimeter or less rises in these ponds that correspond to the tides offshore. So, the point is, you can build seawalls, you can build levees, you can build dikes, and it won’t have any impact whatsoever. The city is flooding.

I believe that we are going to respond to a catastrophe and not in a planned fashion, I’m at a loss as to what they’re going to do in a big storm. Many of the high rises will survive, but access to them will be gone, and of course if you built seawalls, there will be no beach. We have two choices, and I figure we’re going to pick the worse choice.

If I was king of Miami, I would immediately stop some of the multi-billion dollar developments that are going on. Or at least I would tell people: ‘Go ahead and build, but let’s face it, it’s not going to work. Your streets are going to be flooded on a frequent basis in a few decades.’

Why is it so hard to get people to be proactive on this?

The problem is fundamentally we have very wealthy and very important and very powerful people living along the shoreline. In North and South Carolina, the wealthy islands are controlling coastal management in the state. There are wealthy people on all the islands, but the super wealthy ones are the ones that have the money to influence the politicians and so forth. That’s so hard to overcome. The politicians in the coastal zone are beholden to these wealthy people.

We’re starting to pay some attention, not in any big way — and cities like Miami, which are doomed, are completely ignoring the problem. It is amazing to me that big time development continues in the city of Miami, when it’s all going to go away.

Are you hopeful that people are going to start the retreat before things get really bad?

I’m not hopeful. We have two choices — we could move back now, and respond now in a planned fashion, in the context of what we know is going to happen, or what we suspect is going to happen. Or we can respond in response to catastrophes — that is, big storms. And that’s what I think will happen.

That will be really apparent in the Carolinas especially. A lot of damage will occur if another 1962 Ash Wednesday storm occurs. It will be hell. I’m hoping that one crisis will do it — one really bad storm.