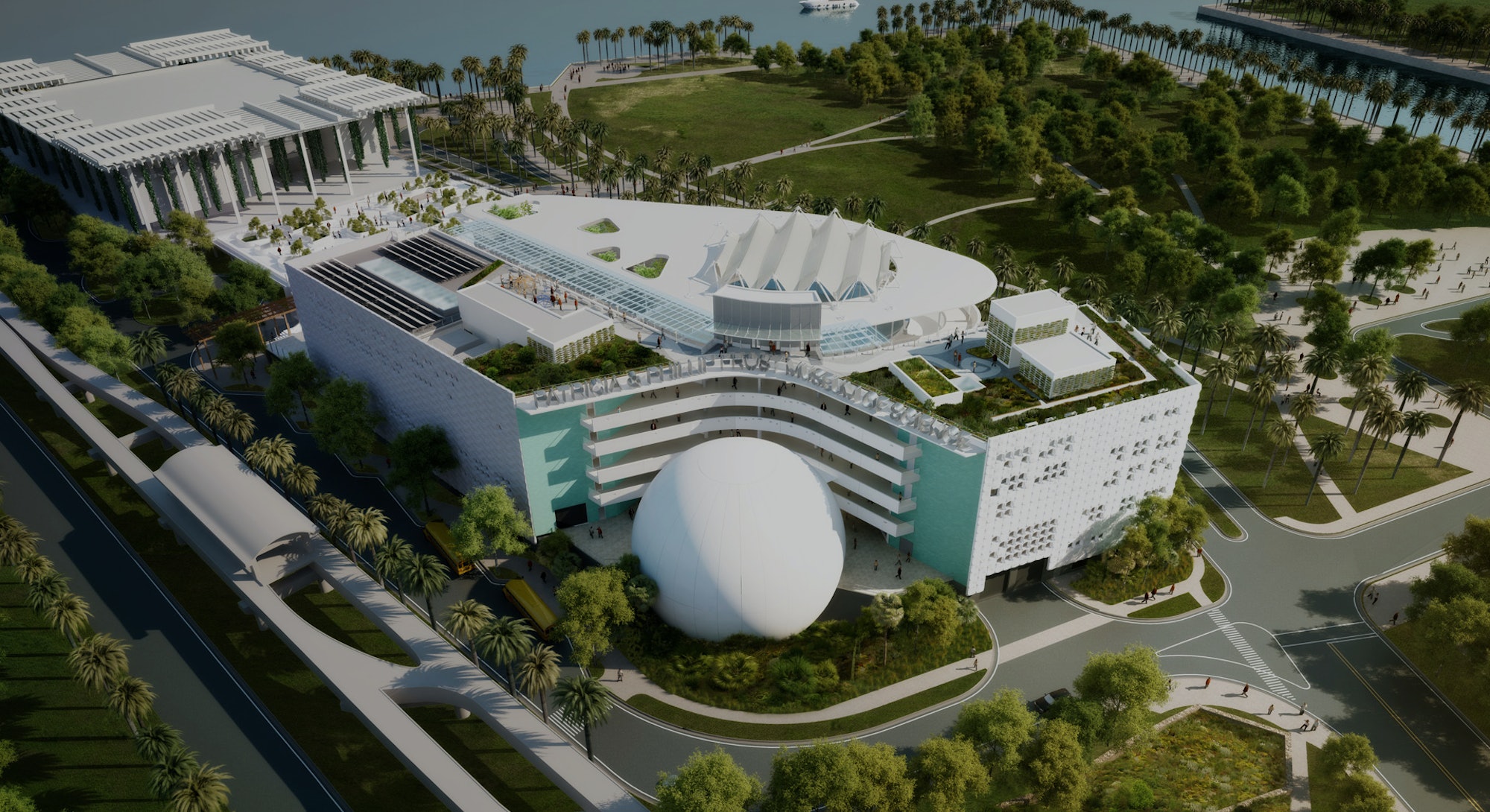 The mammoth skeleton of Miami’s Patricia and Phillip Frost Museum of Science, otherwise known as MiaSci, backs onto the blue-green waters of Biscayne Bay. If all had gone according to plan, its towering steel ribcage would enclose a two-story shark-filled aquarium, an arching planetarium, an “energy dance floor,” and other vital organs by now. But all did not go according to plan and now the 250,000-square-foot, $325-million project that started in 2011 has become a problem for a city that already has its fair share of pressing issues. After a private fundraising shortfall stalled construction last year, city hall offered up $50 million in taxpayer money and a simple argument: Future Miamians would thank their science-respecting, future-oriented mayor for his prescience. But at the rate the sea level is rising, the next generation of Miami citizens won’t just be bailing out their grandparents; they’ll be bailing water out of the Frost Museum of Science’s entryway.

Sometimes science tells us that celebrating science is a bad idea.

The chain-link fence surrounding the construction site is papered with banners announcing: el futuro comienza aquí. But the future has the unfortunate tendency to begin and end in the same place. Even now, the uncharacteristically early storms hitting the bay threaten to fling museum signage out to sea. And it’s no secret that Miami’s floods are going to get worse as water levels rise. The University of Miami’s expert on environmental disasters, Harold Wanless, Ph.D. tells Inverse that the high tide line will likely go up by at least 6.6 feet before the end of the century. Those aren’t scare quotes numbers either, they’re from the National Oceanic and Atmospheric Administration. Waterfront real estate in Miami has a sell by date.

“If you do the honest economics, people are going to realize the hopelessness of it,” Wanless says. “But they’re not doing that. They don’t seem to want to see that.”

By the U.S. government’s calculations, the sea level will rise by a full 2 feet by 2048 and 3 feet by 2065, and that’s not even taking accelerated ice melt into account. The jury-refereed data NOAA is using, Wanless explains, is ten years old at best. Most current research takes into account the effects of the warming ocean water on the melting ice sheets of Greenland and Antarctica. “Ocean water is getting in under the ice sheet through the outlet fjords,” he says. “That’s been happening since a little after 1990 and it’s been speeding up since then. That’s the huge concern.”

What this means for Miami is that its waterfront will be soaked well before the end of the century. NOAA senior advisor Margaret Davidson has warned that a 9-foot sea level rise by 2050 is not out of the question. No matter which figure you use, the Frost Museum, shielded from the bay by only the Perez Art Museum Miami — an airy $220 million Herzon & de Meuron construction overlooking the bay — doesn’t stand a chance.

And yet construction, though delayed, almost defiantly continues. From Biscayne Boulevard, the busy thoroughfare running parallel to the bay, the museum looks almost complete; its white walls curve parenthetically around the future planetarium, proudly displayed like a giant pearl. (On its blog, the Frost Museum hosts a live feed of the building’s progress.) Construction is a bit slower around the back, where black bags of trash are piled near orange cranes, and snaking pipes and yellow insulation are visible through the unfinished framework. It isn’t obvious that anyone is preparing for a flood.

A representative from the Frost Museum told Inverse that its plan exceeds the requirements for flood-proofing laid out by the City of Miami Code of Ordinances and the Federal Emergency Management Agency by 50%; the building’s ground floor will be flood-proofed to 10 feet over the base flood elevation, while building codes only require they exceed it by a single foot. But by Wanless’ math, even these safeguards might not leave enough of a margin.

What really drives Wanless crazy is the city’s lack of foresight. If its builders and funders really wanted to leave something behind for future generations, their museum plan would, at the very minimum, have included advanced drainage and water pumping systems for the inevitable influx of water. But if we’re being honest, Wanless explains, even that won’t be enough. “They’re trying to keep the drainage going, so that people can keep building their $5 and $10 million homes along the bay,” he says, referring to the $400 million push to install electric pumps along flood-prone roads in nearby Miami Beach, which has so far been successful in siphoning water back into Biscayne Bay. “But the problem is that with another foot of sea level rise, all the sea walls are going to be overtopped very frequently.”

The Frost Museum is sitting on what is essentially four acres of filled-in mangrove swamp. In some spots, it’s barely two feet above sea level and is already frequently flooded during big tides. With a three-foot rise, the area will, as Wanless puts it, become “unlivable.”

“Honest planning is figuring out what you need to do with each six inches of sea level rise,” he says. “You need to maintain and integrate an infrastructure. That’s everything. Not just the roads, not just the sewers, not just electricity. Everything.”

Still, Miami real estate developers continue to live for the short term. When Art Basel hit the city in 2002, being myopic became very lucrative; now, all along Miami’s waterfront, high-rise hotels and gleaming condominiums tower over the waterfront, and development continues to boom. While it’s possible new residents simply don’t know what they’re in for, it’s more likely they just don’t care: “If you live in a nice place, people are going to want to live there until the last minute,” Wanless shrugs.

Looking at the soaring developments along Biscayne Bay’s waterfront, it’s easy to dismiss Wanless as an old crank. The Frost Museum is admittedly grand, even in its unfinished state, and the land it sits on is, for the most part, dry. The architects behind the project certainly think they can keep it that way; in an e-mail to Inverse , a museum representative said its developers were “cognizant of the risks of increasing coastal flooding and hurricanes” and that its facilities were “designed and constructed with extreme weather events in mind.” This optimism is shared by city officials, buoyed by the success of Miami Beach’s electric pumps. “When our children and grandchildren are going through that science museum, they are going to thank us for what we did today,” Miami-Dade county mayor Mario Gimenez said after the $49 million bailout was approved with a 12-1 vote.

But if Wanless is right, Miami’s children and grandchildren are more likely to remember their forebears for being painfully short-sighted. Nearly $215 million of taxpayer dollars have been spent on the Frost Museum, and it hasn’t even opened yet; by the time the sea level has risen two feet by 2048, it’s the taxpayers’ grandkids that will be paying to keep the museum dry. But the reality of accelerating climate change is difficult to grasp, and its implications even more so. That will not always be the case.

“We’ve created, right now, a slow-moving catastrophe, but it’ll become a freight train moving out of control by the middle of the century,” Wanless says. “We’re going to be afraid of it.”