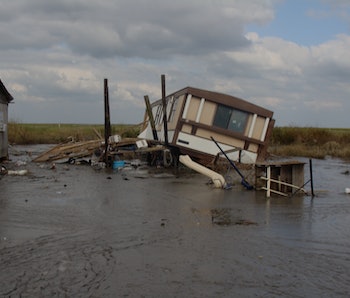 A coastal Native American community in Louisiana has just announced it will relocate to escape rising tides that have already swallowed 98 percent of its land.

The Isle de Jean Charles band of the Biloxi-Chitimacha-Choctaw Indians lives on a narrow strip of land, just a quarter mile wide by half a mile long. In 1950, the island covered 15,000 acres. Officially, the community is the first in the United States to relocate as a direct result of climate change.

“There is no silver lining to the plight of the Biloxi-Chitimacha-Choctaw Indians, no light at the end of the tunnel,” according to researchers at Northern Arizona University. “Their island is sinking into the sea and the erosion seems to hasten by the day, the flooding worse with each storm season. Some residents claim they lose an inch every twenty minutes.”

Climate change-driven sea level rise is obviously part of the problem, but it’s not the whole story. Not even close. Both canal dredging for oil and gas operations and, ironically, levee building, allow for the encroachment of saltwater and disrupt the natural replenishing of Louisiana’s marshlands. An area the size of Manhattan is swallowed up every year.

Isle de Jean Charles was only settled in the first place because a group of Native Americans chose to retreat to the bayou rather than be forced by European settlers to move out of state and onto reservations in Oklahoma, as was the case with other nearby tribes. That part of the Louisiana swamp was officially considered uninhabitable by the state government until 1876, when they apparently noticed that people had figured out how to live there anyway, and began selling off parcels of land to the inhabitants. Previous to that time it was illegal for Native Americans to own land in the state at all.

About 100 residents remain, down from a peak of 400. The relocation will be financed in part by $48 million from the U.S. Department of Housing and Urban Development that was acquired by the State of Louisiana in this year’s billion-dollar competition for projects related to climate change resiliency.

Isle de Jean Charles is not the only community swallowed up by the rising seas, it’s just the first to figure out how to pay to rebuild elsewhere. Flooding and erosion affect 186 Alaska Native villages, and four of those are in imminent danger, according to the U.S. Government Accountability Office. Newtok, Alaska has already technically begun the relocation — six houses have been built at the proposed new town site. But how to pay for the rest? As it turns out, Alaska also submitted a proposal for that Housing and Urban Development competition, one that would have seen $62 million spent to relocate 62 families in that community. Alaska was a finalist in the competition but didn’t walk away with the money.

Kivalina, Koyukuk, and Shishmaref are the three other most-vulnerable Alaskan communities. They have each begun planning for a relocation, but are having a hard time overcoming bureaucratic hurdles and qualifying for government assistance programs.

Government relocation of aboriginal communities has a cruel and brutal history in the United States. It used to be that authorities forced the movement of people who didn’t want it. Now the government won’t pay for the relocation of those that need it.

Climate change, it seems, is just another way that colonial interests disenfranchise aboriginal groups from their land. America got rich off of burning cheap fossil fuels, and the people now paying the price are those who have been and continue to be deliberately excluded from that economic system.

More like this
Science
Jan. 25, 2023
Look: Primate relative shows how ancient animals adapted to global warming
By Jennifer Walter
Science
Jan. 24, 2023
The Doomsday Clock is now at 90 seconds to midnight — here's what that means
By Kiona Smith
Science
Feb. 1, 2023
7 Years Ago the World Agreed to Slow Down Climate Change — But a New Report Shows an Uneven Future
By Tara Yarlagadda
LEARN SOMETHING NEW EVERY DAY.
Related Tags
Share: