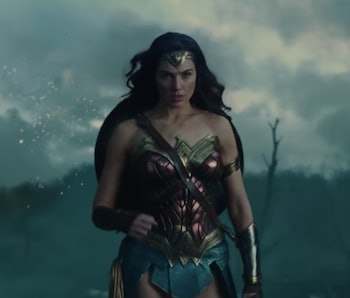 Wonder Woman is filled with so many trope-busting gems that the film more than measures up as the first-ever female-fronted superhero movie. There are more female characters in the opening scene than there are in some entire franchises. Other than the sheer delight in watching a hero born from an island of fighting women, or having our protagonist remind the male lead that his anatomy has proven irrelevant to female pleasure, there is one thing that really stands out about Diana Prince. It’s the way she walks.

A big reason is the sheer stature of Gal Gadot, and the way its made use of by director Patty Jenkins. The Israeli-born actress is already five-foot-ten, and Wonder Woman has her appear to be essentially the same height as co-star Chris Pine — who is in fact six feet tall. And you can’t deny it, there is something incredibly powerful — and unique — about watching a female lead who is not only as tall but taller than her fellow characters.

The effect is even better when Gadot walks. Her motions are so strong and confident; there is simply nothing weak about her character. For every female lead that has ever gotten as much airtime as their male counterparts, there has always seemed to be some physical caveat. Dana Scully, for example, more than measured up when it came to screen time on The X-Files, but lord knows how she managed to run through nine seasons in those dumb high heels.

It’s true that Diana’s costume comes with a slightly heeled boot, but it doesn’t make for any weird and awkward trotting, like poor Lynda Carter’s Wonder Woman of yore…

Diana’s awesome physicality is likely a combination of an accurate reading of Wonder Woman’s origin story and some scientifically-proven indicators of confidence.

As an Amazon from the island of Themyscira, she’s supposed to be six feet tall. And that steady strut that causes everyone to stare at Ms. Prince as she travels through war-torn Europe is a major testament to her Amazonian upbringing. Growing up in a world without men, Diana was never socialized to be intimidated by the opposite sex or to believe that she was in any way less capable, and her confidence is tangible.

Statistics have shown how women tend to underplay their abilities — especially in the hard sciences — even when there is no evidence to support that they’re fundamentally less capable.

A study by Florida State University that followed students starting in tenth grade over six years found that boys rated their ability 27 percent higher than girls did. According to the journal Frontiers in Psychology:

The authors note boys are encouraged from a young age to pursue challenge — including the risk of failure—while girls tend to pursue perfection, judging themselves and being judged by more restrictive standards reinforced by media and society at large.

Confidence plays a large factor in female performance, in part because women grow up in a society that doubts their abilities. In fact, a different study conducted by the University of Warwick found that women who were made to feel confident in their abilities actually performed better than other women on tasks that are statistically more often accomplished by men.

Science can also explain why Diana’s physical demeanor matters so much in the first place. A Princeton University study found that participants had a much easier time interpreting the major emotions of people in photographs based on their body language than their facial expressions.

Way before 2017’s Wonder Woman started its rise to becoming a cultural touchstone, there was already the Wonder Woman pose. Amy Cuddy, a social psychologist and associate professor at Harvard Business School, did a really popular TED talk in 2012 on “high power posing.”

After posing in the Wonder Woman — one of several stances suggested by Cuddy — participants in a study saw a 20 percent decrease in cortisol, the hormone related to stress. They also experienced a 20 percent increase in testosterone, which is associated with confidence.

There’s not a lot of hands-on-hips action in the new Wonder Woman, but the film more than makes up for it. And if all goes well, we’ll be seeing a lot more of Gal Gadot’s strut in many franchise films to come.