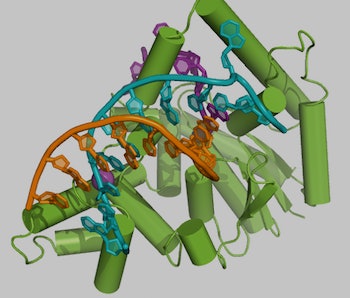 When Agent Scully was abducted by aliens in the second season of the X-Files, it was a clever fiction device to cover for Gillian Anderson’s very nonfiction pregnancy. Scully, the story went, was injected with branched DNA of alien origin, which created a toxicity effect in her system that left her comatose and nearly killed her. Writers injected the narrative arc out of necessity, but its implications were felt through the rest of franchise history, up to the recent series reboot when (spoiler ahead) Scully’s alien DNA makes her both invulnerable to and a potential cure for an extraterrestrial virus.

Just as there are parallels between Scully and Gillian Anderson, there are parallels between the X-Files plotline and real research by real scientists who aim to use their knowledge to combat real human disease. Researchers at University of Sheffield are studying the process by which DNA branches and rebuilds itself — a mystery that scientists have been trying to unlock for 20 years. The team recently imaged for the first time ever the process by which a special enzyme called flap endonuclease works to trim branched sections of DNA to restore a complete double helix.

“The enzymes that carry out this process are sometimes involved in cancer,” said lead author Jon Sayers in a release. “They have been linked to tumour progression and mutation, so this discovery could pave the way for better diagnostics or new drugs.” Other applications could include building therapies that target drug-resistant bacteria, he added.

While Scully’s branched DNA certainly had some paranormal characteristics, branched DNA is usually more mundane. Every time a cell divides, it needs to copy its own DNA. This process necessarily involves a branching of the DNA strand, so that it can be restored as two complete wholes. The flap endonuclease is one of many enzymes that have a special role in this process. The researchers used the Diamond Light Source, a very high-powered electron microscope, to observe this process in action. They found that the flap endonuclease acts as a sort of microscopic set of wire-cutters, threading the branched end of DNA through itself before snipping it off cleanly.

“We can now see the details of how cells have evolved to tidy up after themselves as they copy their DNA, which reduces their risk of harmful mutations,” said John Rafferty, another author of the study. “This sort of information is fundamental in helping us understand and maybe treat those cells where occasionally things do go wrong.”

The truth is out there, and aliens have nothing to do with it. But it still might save the world.